Running from 2015 to ’20, this project fit into iSEE’s Energy Transitions and Sustainable Infrastructure research themes. UPDATE: Portions of this project are now housed in the Department of Civil & Environmental Engineering’s Center for Infrastructure Resilience in Cities as Livable Environments (CIRCLE); all future updates can be found here >>>

“With recent changes in water and fuel availability, energy production and regulation, and community interaction, the previously omitted interdependencies between critical infrastructure systems in the United States are not as negligible as they once were,” the Principal Investigators said. “This project focuses on developing an analytical framework for modeling and analyzing these Interdependent Critical Infrastructure (ICI) systems, incorporating both renewable energy and national transportation systems.”

The results will be used to create a wealth of knowledge that will drive future energy and environmental policies, infrastructure design and management, and educational curricula.

PI Ximing Cai and Co-PI Madhu Khanna, recently named President Elect of the Agricultural and Applied Economics Association, report the following progress during the fifth year of this iSEE seed-funded project as well as after the third year of a $2.43M NSF INFEWS grant extending some of the research:

PI Ximing Cai, recently named a 2019 American Geophysical Union Fellow, and Co-PI Madhu Khanna report the following progress during the fourth year of this iSEE seed-funded project as well as after the second year of a $2.43M NSF INFEWS grant extending some of the research:

A look at the most recent publications by members of the Critical Infrastructure and Transportation Project team:

As water scarcity issues rise across the globe, both residential homes and commercial services, such as thermal power, are impacted.

Due to tensions between power companies and individuals — and spikes in electricity pricing — exploring financially viable solutions might push sustainable progress forward.

Thermal power plants have been at odds with both small (individuals) and large (such as agriculture) water users, especially during times of drought and water rationing. This analysis evaluated both long- and short-term demands including factors such as water consumption, water demand, electricity output, waste heat, and overall costs.

According to the study, “The inelasticity of thermal power plant water demand suggests that these power plants do not require free allocation of water from senior water rights holders during periods of scarcity, and the creation of enabling environments for water lease transactions might unlock greater economic efficiency.”

The analysis found that efficiency retro-fitting of thermal power plants did very little to improve overall water reduction in the long-term.

In March 2019, Tushar Apurv, a Ph.D. Candidate in Civil and Environmental Engineering, Ximing Cai, Professor of Civil and Environmental Engineering and iSEE’s Associate Director for Campus Sustainability, and Xing Yuan, Professor of Hydrology and Water Resources at Nanjing University published “Influence of Internal Variability and Global Warming on Multidecadal Changes in Regional Drought Severity over the Continental United States” in the Journal of Hydrometerology.

The study found that global warming is likely to increase the drought severity in southeast and southwest states, making climate change adaptation necessary. All regions of the U.S. were included spanning over 100 years of data.

According to the study, “particular attention should be given to Southern Plains, Southeast, and Southwest, which are likely to be exposed to increased drought risk in the future.”

“The estimation of drought severity in the short-term future based on the analysis of temporal patterns in the past and the likely changes in the drivers of droughts, as presented in this study, suggests the need for different strategies for regional drought risk management in different parts of the CONUS,” the research team wrote. 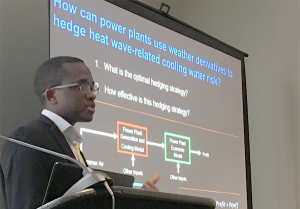 At the World Environmental and Water Resources Congress in 2017 in Sacramento, Critical Infrastructure and Transportation team member William Lubega presented his work on financial instruments for mitigating cooling water risk at power plants.

PI Ximing Cai reports the following progress during the third year of this iSEE seed-funded project: 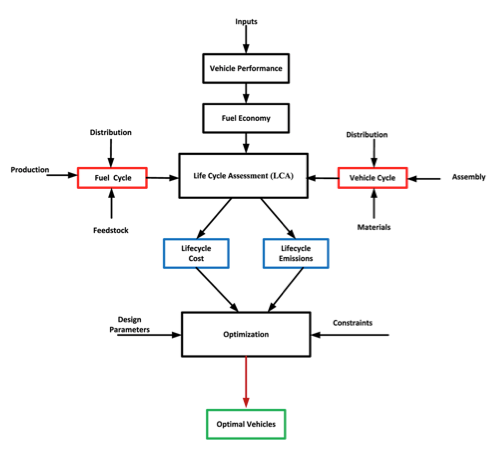 Figure 1: Methodology for the optimal selection of electric vehicles. From “Multicriterion optimal electric drive vehicle selection based on lifecycle emission and lifecycle cost.”

Transitioning from petroleum-fueled passenger vehicles to renewably powered ones is a widely acclaimed tactic for cutting greenhouse gas (GHG) emissions, but putting it into practice has been slow. While electric vehicles are gaining popularity, they make up a small proportion of cars on the road because their purchase and maintenance costs are high and yet their effective driving range remains low. Attempts by manufacturers to increase the driving range with more battery storage unfortunately also increases price. Cars capable of using both electric and petroleum fuel sources solve the range problem — but also have higher emissions.

So, what’s the best option? Tracing the emissions and costs of vehicle construction, purchase, and operation — and the emissions and costs of their possible fuel sources — ICI team members built an optimization model to analyze and rank vehicles given a certain annual range of miles driven. All the inputs they looked at are visualized in Figure 1. The results can be briefly highlighted as follows:

“Although there are studies on the environmental impacts of (electric vehicles), the optimal selection of these vehicles when several parameters vary has not been deeply investigated,” wrote iSEE Postdoctoral Research Associate Pouria Ahmadi, a co-author of the study along with Primary Investigators Ximing Cai and Madhu Khanna. “We aimed to comprehensively model and compare different vehicles to find the tradeoffs and tipping points in consumer choices.”

AUG. 17, 2017 — To help explore particular aspects of the Critical Infrastructure and Transportation project that hit close to home in Illinois, Principal Investigator Ximing Cai and others were awarded $2.43 million from the National Science Foundation (NSF) for a study titled “Advancing FEW System Resilience in the Corn Belt by Integrated Technology-Environment-Economics Modeling of Nutrient Cycling.”

Funded by this award through the NSF Innovations at the Nexus of Food, Energy and Water Systems (INFEWS) initiative, Cai will work with Roland Cusick, Assistant Professor of Civil and Environmental Engineering; Benjamin Gramig, Associate Professor of Agricultural and Consumer Economics; Vijay Singh, Professor of Agricultural and Biological Engineering and the Director of the Integrated Bioprocessing Research Laboratory; and Gregory McIsaac, Professor Emeritus of Natural Resources and Environmental Sciences and Senior Research Scientist at the Agricultural Watershed Institute.

An overview of the newly funded study:

“Food production, water supply, water quality, energy supply, and economic growth and financial stability in the Corn Belt depend on each other while competing for resources. In particular, recent increases in corn-based ethanol production in the region have increased interdependencies among food, energy and water (FEW) in the region and made the integrated FEW system more vulnerable to risks and threats. To help decision makers in Corn Belt watersheds address such interrelated challenges and opportunities, we will develop an Integrated Technology-Environment-Economics Modeling (ITEEM) tool to be used to understand how changes in one sector may cause changes in other sectors. The ITEEM will be used to compare whether and how different approaches to addressing problems and opportunities in the integrated FEW systems, including: a) recovering nutrients from grain processing and wastewater treatment facilities; b) strategic integration of perennial grasses like Miscanthus and switchgrass into annual grain landscapes for biofuel feedstock production and nutrient and sediment loss reduction; and c) adjusting farm management practices that influence nutrient and sediment loss to surface water.”

Read the full abstract on the INFEWS-funded study >>>

New research published by iSEE’s Critical Infrastructure and Transportation team recommends a new way to regulate how we deal with electricity generation during times when it’s really hot and/or during an ongoing drought.

The relationship between a reliable electricity supply and the health of aquatic ecosystems is complex. When water is drawn into a power plant, it enters at one temperature but leaves a lot warmer after performing its cooling function during the power generation process. The extra heat the water carries when it rejoins its source is a form of “thermal pollution,” and it’s a big concern for ecosystem health.

“Even small increases in ambient temperature — 5-10 degrees Celsius — can have significant impacts on the health of aquatic organisms like fish,” said William Lubega, an Ph.D. Candidate in Environmental Engineering and lead author of the paper published in Applied Energy. “When you have a drought and a heat wave (at the same time), the temperature of the water is already higher than usual, and the fish are experiencing thermal stress.”

U.S. Environmental Protection Agency (EPA) rules cap the amount of thermal pollution power generators can put into the environment. But when a heat wave strikes, energy demand increases as lots of AC units are switched on. At the same time, the ambient water temperatures are going up, and the streamflow is going down. The ecosystem is stressed, and yet the power plants need to make even more electricity.

Because a shortfall of energy cannot be allowed, the EPA grants “variances,” or permission to pollute more than usual, to the power plants. This usually happens retroactively, only after it is apparent extra pollution is going to happen. Plants submit requests for some leeway independently, with no communication between operators. Generally, everyone asks to keep producing at the same level, Lubega wrote, and so lots of extra pollution occurs.

Lubega’s work claims that this isn’t the best way to go about providing energy — especially since it jeopardizes the environment. He instead looked at the system as an optimization problem: How do we get all the energy we need while minimizing environmental impact?

He mathematically modeled the relationships between power plants and rivers, and between rivers and the atmosphere. The resulting computer model can receive information about a particular system of power plants and the water sources they’re relying on, then respond with best energy generation levels for each plant and the number of variances it actually needs. “The difference in this approach is that we’re looking at the entire grid, the sum of energy we need, rather than a single power plant at a time,” he said. “To give out the smallest number of variances possible, some plants may reduce their output below usual level, and others may continue at the same level because their water source is less stressed.”

Research into the so-called “energy-water nexus” is becoming an increasingly important in the face of global climate change.

“Availability of freshwater for electricity, as well as all other uses, is likely to be highly variable as climate changes. At the same time, global energy demand continues to increase,” said paper co-author Ashlynn Stillwell, Assistant Professor of Civil and Environmental Engineering. “Our aim with this research was to create some adaptable tools that can help us balance the water and energy needs, while also preserving aquatic ecosystems.”

Lubega and Stillwell suggest that proactive optimal rules for energy generation during drought or heat wave conditions could be integrated into regular power grid seasonal planning procedures as standard practice.

“Rules developed in advance are straightforward for the relevant environmental agency to apply, and minimize uncertainty and associated financial risk for the various power system participants,” they wrote.

Read the full paper on the Applied Energy website >>> 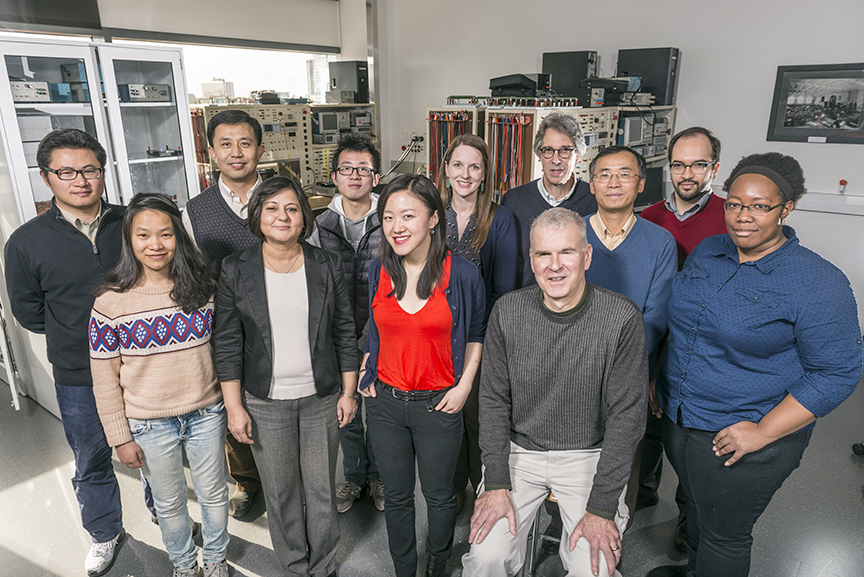 Principal Investigators and co-PIs (all pictured in group photo)