The E-E FEWS Project, which originally was seed-funded in 2018 through iSEE’s Campus as a Living Laboratory program, fits into two iSEE research themes: Water & Land Stewardship; and Energy Transitions.

According to Lead Investigator Yuanhui Zhang: “The world’s food, energy, and water systems are tightly connected. Sometimes, they work seamlessly together, but often they are competing for the same pool of resources, namely fresh water and clean energy.”

Led by Zhang, a Professor of Agricultural & Biological Engineering, researchers from across campus will test a processing system that can deliver not only renewable energy, but also clean water and some bonus organic fertilizers for agriculture. Their design is meant to find synergies between water, food, and energy — where one category’s waste product could be another one’s ingredients.

“The U.S. produces an estimated 79 million dry tons of sustainably collectable livestock manure and food processing waste annually,” Zhang said. “We will demonstrate that this biowaste stream has the potential to be amplified via multi-cycle nutrient and wastewater reuse to 240-800 million tons of mixed algal-bacteria feedstocks that can be converted into 120-400 million tons of biocrude oil — equivalent to 12-40% of the total petroleum consumed annually in the U.S. — while also cleaning an estimated 7.9 billion tons of wastewater.”

A process called hydrothermal liquefaction (HTL) sits at the heart of the project — seed-funded by iSEE in 2018. Biowaste solids like campus food scraps or dried manures are exposed to high heat and pressure, replicating the geological process that created fossil fuels many millennia ago. While the energy-rich molecules of the biowaste become biocrude oil, the other nutrient-rich parts can be used as fertilizers for food production.

Meanwhile, the liquid parts of biowaste can be treated to become clean water. Algae will eat up all the pollutants and leave behind clean water, and they can also be “fed” with the leftover nutrients from the HTL step. At the end of their lifespan, the algae themselves serve as an input for HTL, making sure nothing goes to waste.

This project is built upon an ongoing, student-led Student Sustainability Committee (SSC)-funded project at the Urbana-Champaign Sanitary District to convert food waste on campus to biofuel using the EE-FEWS approach. Team partners built a pilot HTL reactor system on campus to produce biofuel from food waste. 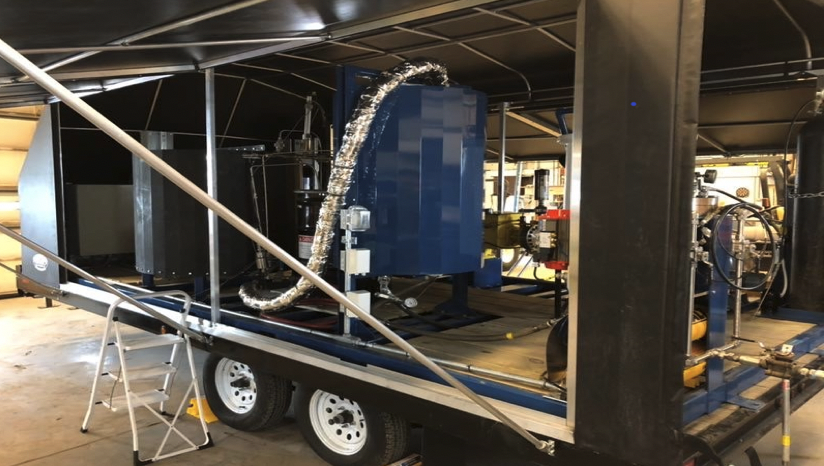 A mobile hydrothermal liquefaction (HTL) reactor at the University of Illinois with the capacity to treat 1 ton of wet waste per day.

In the past year, the team was awarded two grants:

“During this project, we have continued the HTL reactor development,” Zhang said. “We have collaborated with an industry partner and developed a mobile continuous HTL reactor with a capacity of processing 1 ton of wet waste per day and producing 100 liters of biocrude oil per day. This capacity of producing HTL biocrude oil and PHW allows us to perform the downstream research on upscaled techniques for biocrude oil upgradation and PHW valorization.”

The team has demonstrated that the energy recovered from biocrude oil can be significantly higher than the HTL process energy — and it recently investigated the engine performance of HTL biodiesel blends, demonstrating the promise of the waste-to-fuel approach.  The resulting biodiesel blend met the ASTM diesel standard and was tested in combustion engines (Lee et al., 2020; see publication below).

“Based on the diesel blend work, we started to explore kerosene (jet fuel) production from HTL biocrude oil, and recent tests have demonstrated that upgrading HTL biocrude oil to kerosene (bio-kerosene) is highly feasible,” Zhang said. “In summary, our E2-Energy approach has shown promising results in producing renewable biofuels, and at the same time protects the environment by recovering carbon and nutrients and reusing the wastewater. This iSEE project has enabled our team to expend our research program and become more competitive in obtaining external grants.”