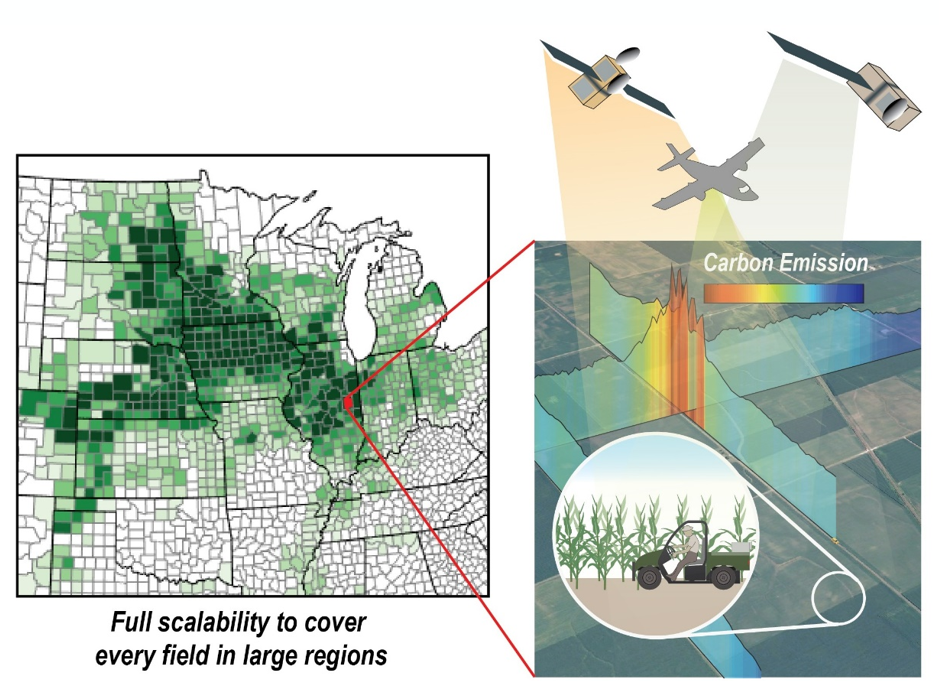 Carbon is everywhere. It’s in the atmosphere, in the oceans, in the soil, in our food, in our bodies. As the backbone of all organic molecules that make up life, carbon is a very accurate predictor of crop yields. And soil is the largest carbon pool on earth, playing an important role in keeping our climate stable.

As such, computational models that track carbon as it cycles through an agroecosystem have massive untapped potential to advance the field of precision agriculture, increasing crop yields and informing sustainable farming practices.

“Although modeling the carbon cycle in agroecosystems has been done before, our work represents the most comprehensive integration of models and observations, as well as rigorous validation that includes rich measurements from both field and regional scales. The modeling performance of our solution (published this month in Agricultural and Forest Meteorology) far surpasses prior studies,” said Kaiyu Guan, an Associate Professor of Natural Resources & Environmental Sciences at the University of Illinois Urbana-Champaign. Guan is also a Blue Waters Associate Professor at the National Center for Supercomputing Applications (NCSA) and Founding Director of the Agroecosystem Sustainability Center created by the College of Agricultural, Consumer and Environmental Sciences and iSEE.

The carbon cycle in agroecosystems can be generalized into three main carbon fluxes that travel to and from the plants and soil. Carbon enters the system through photosynthesis. Some leaves the system via plant respiration and soil respiration, while carbon in the form of grain and biomass is removed when crops are harvested. In principle, the sum of these fluxes is equal to the net carbon movement through the system — and that net change, especially over long periods of time, is what contributes to change in an agroecosystem’s soil organic carbon.

Soil organic carbon (SOC) is exactly what it sounds like: carbon in the form of organic molecules in the soil. Generally speaking, the greater a field’s SOC, the more productive it will be. However, in the U.S. Midwest’s croplands, about 30-50% of SOC has been lost since their cultivation began. This loss of SOC may enhance the risk of decreases in crop yield, especially under future climate conditions.

Members of Guan’s SMARTFARM Project team used an advanced agroecosystem model named ecosys, which contains the most complex mechanisms for simulating the energy, water, carbon, and nutrient fluxes cycling in the agroecosystem. This model was originally developed by Professor of Ecosystem Modelling Robert Grant from the University of Alberta. Over the past few years, Guan’s team has made continuous efforts toward building a solution to further constrain the ecosys model with massive observational data. 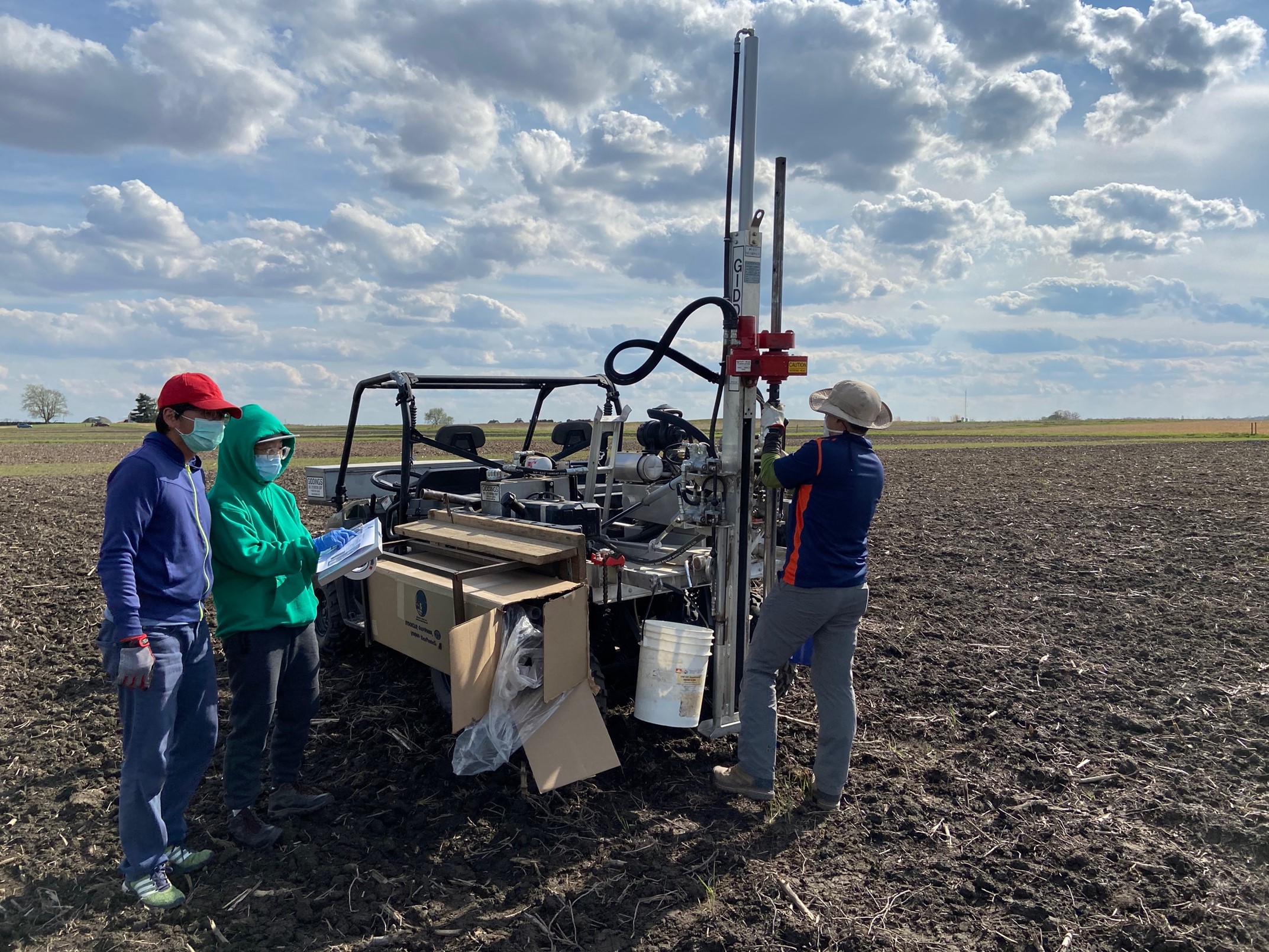 The researchers used an innovative “model-data fusion” approach, which integrates advanced model simulations with observational data. This approach allowed them to validate model simulation results, constrain uncertain model parameters, and ensure that the model emulates the processes driving the carbon cycle at all stages. Multiple types of datasets were used, like eddy covariance flux tower data, which is widely regarded as the gold standard for landscape-scale measures of carbon; USDA crop yield data that provides the harvested carbon; and novel satellite data that provides photosynthesis observations.

“Additionally, we used detailed carbon allocation data measured over 10 years,” said lead author Wang Zhou, a Postdoctoral Research Associate. “That’s the data that tells you where a plant allocates the carbon it takes in from photosynthesis — how much goes to the stem, how much to the roots, how much to the leaves.”

“What really makes our modeling solution exciting,” Guan said, “is that we use the most advanced observations from satellites to constrain a powerful agroecosystem model, and we demonstrate that this can achieve the highest performance in estimating different carbon components.” Early this year, Guan and Research Scientist Chongya Jiang developed an algorithm to estimate photosynthesis from satellite data. This newly available photosynthesis data across every corn and soybean field in the U.S. Midwest was also used to validate and constrain the model to ensure the team can accurately reproduce the observed photosynthesis from satellite and the USDA-reported crop yield, as well as their responses to environmental variability.

“Integrating satellite observations with a process-based model like ecosys is the key to ensure the accuracy of our solution, and more importantly, the potential of using our modeling solution at a new location, such as South America or Africa,” Research Scientist Bin Peng said.

With so many moving parts, a huge amount of time and effort has gone into the development of this model-data fusion solution. Guan’s team is proud to release the first paper on the model in Agricultural and Forest Meteorology, and the researchers have a couple of other papers using this method in the works. For instance, in another recent study involving Guan’s team and led by the University of Minnesota, the researchers integrated their ecosys-simulated results with artificial intelligence to estimate N2O emission from the U.S. Corn Belt. This study was published in Environmental Research Letters.

“This is state of the art for quantifying carbon budget and credit,” Guan said. “We want to show people what is possible and set a high standard going forward. We let rigorous science speak for itself. I believe that’s the most powerful way to say things as scientists.”

Guan’s SMARTFARM Project, a program funded by the U.S. Department of Energy, is focused on pioneering the technology to quantify field-scale carbon credits for U.S. farmland. The team’s ambition is to use this developed model-data fusion method as the foundation to accurately quantify the carbon budget at any scale, and also support smart management at the farm scale. Through precision agriculture, they hope to help farmers not only maximize their yields, but also better sustain their land and its SOC content.