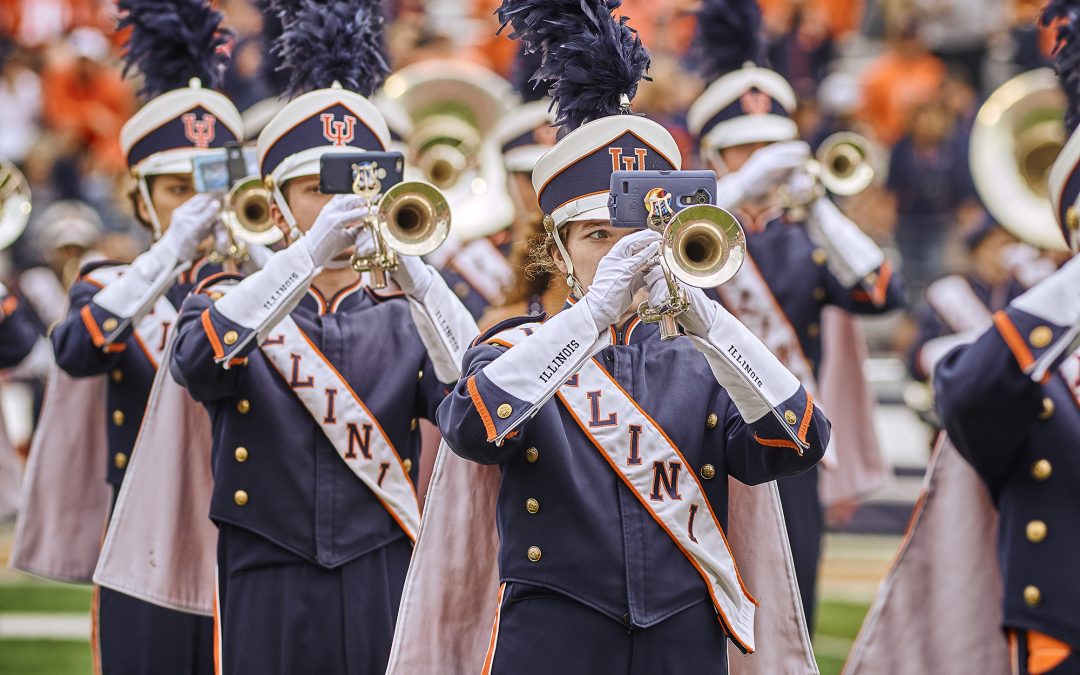 Fifty or more pieces of music for a sporting event, plus 30 pages of drill weekly, plus 375 Marching Illini band members equals nearly $35,000 in annual printing and paper costs.

About two years into Barry Houser’s time as Director of the Marching Illini, he knew something had to change.

“I looked at the numbers and thought, this is simply irresponsible how much money and paper we are wasting,” he said, “and the kicker is, when we are done with that specific game or event, the paper drill and music is thrown away or recycled.”

The total costs associated with this system included toner, the cost of a copier that can handle this specific workload weekly, and the staff time it takes to print and manage the music and drill. With the introduction and availability of improved technologies literally at their fingertips (smartphones), the transition to a paperless Marching Illini began. Once the University of Illinois at Urbana-Champaign offered Box, an online content management program with unlimited storage and free student access, and the Marching Illini adopted a cellphone app to display the drill digitally, it became a game-changer. 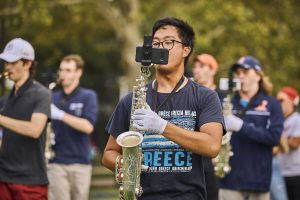 “Today we are a completely paperless operation,” Houser said. “We’re saving $30,000-$35,000 annually and the best part about this system is sustainability.

“We’re not wasting reams of paper, and we’re being smarter about how we use our budget. We’ve been able to use that savings to reinvest in our students, and we are still saving more money than if we were printing all of our music and drill.”

The band looked into purchasing iPads for the students to use, but the cost of purchasing and managing 375 iPads would be significantly more than $240,000. Houser felt like that would be a major step in the wrong direction. The initial adoption of student-owned smartphone technology was fairly seamless with only a handful of students (out of 375) choosing to use paper.

By 2018, all band members were using their own personal devices. The option to print music and drill is still available to all Marching Illini students, but Houser reports that nobody appears to be using this option.

“The Marching Illini have been innovators and trailblazers in finding new technologies to improve rehearsal and performance efficiency impacting band programs across the country,” Houser said.

Houser has spent time giving presentations on this specific topic at conferences throughout the country. He has seen a little industry resistance to change, but Illinois students have adapted to this new system quite well. Those in the profession that have been resistant to this technology do not understand that problems they once faced are solved by this advancement (like rainy days and wet music and drill). The use of cell phones and newly created apps is not a perfect system but the pros certainly outweigh any cons. 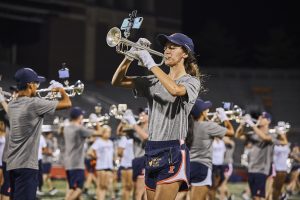 Though the option to use paper is always there, Houser is optimistic about the future of more programs moving to a paperless system.

“Many collegiate and high school programs are beginning to follow suit,” Houser said. “We feel great about how many have decided to jump on the bandwagon. Not because it’s trendy or cool, but because we’re encouraging sustainability and practices that save resources.”

Now that the Marching Illini have tackled one major sustainability issue facing the organization, they are looking at other opportunities. Houser says band members have been working to reduce waste with other aspects of the program, such as their game-day meals and the packaging in which the food is delivered.

“We have added receptacles in our building for paper, plastic, and other recycling,” he said.

Marching bands have existed in some form for hundreds of years. Collegiate marching bands date back to the mid-1800s with the University of Illinois serving as the nation’s first collegiate band program. And with their paper-saving efforts, the Marching Illini have led the way again.

Watch the Marching Illini in action below.