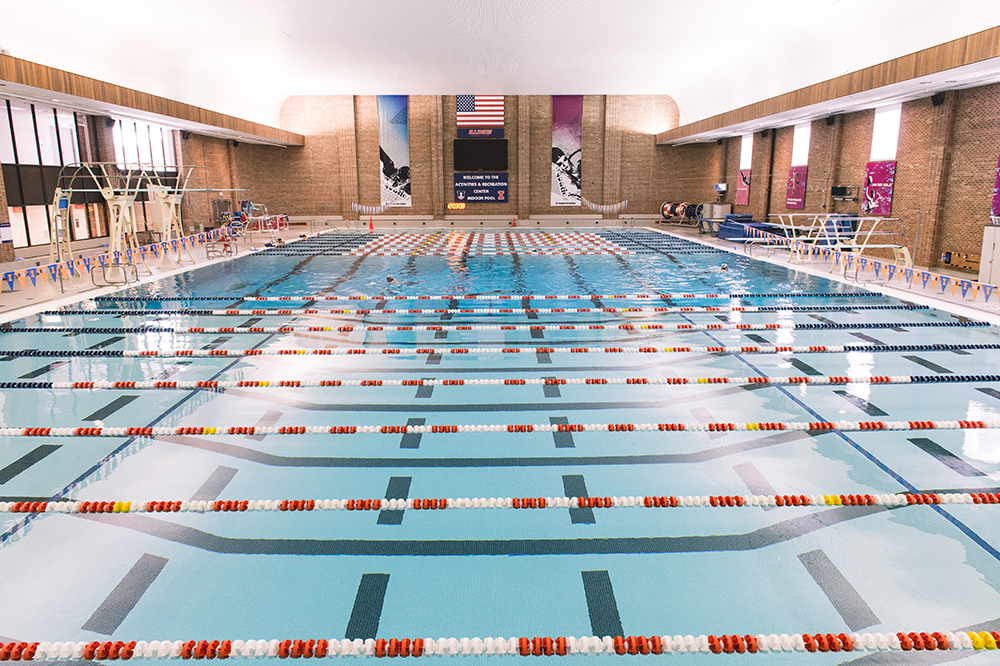 Running a marathon, bicycling a century, or swimming 1,500 meters requires a lot of energy. Finding that energy, however, is a different matter entirely. The world’s most elite athletes spend years tinkering with and perfecting exactly how their energy consumption will give them the slightest competitive edge. Case in point: fuel type matters.

University of Illinois Campus Recreation functions daily like a constantly exercising body. Its mission of serving thousands of students, faculty, alumni, and community members in a multitude of highly specialized, complex athletic facilities demands significant resources. And just like an athlete, how Campus Rec is fueled matters. Only this time it’s in the race against climate change.

Campus Recreation’s website details 15 different initiatives highlighting its sustainability profile. Some actions are fairly minor — using foam soap and recycled paper, for example, has been standard practice in many campus buildings for some time. Others are more substantial, especially in terms of energy savings: The ARC exclusively uses LED bulbs, and there are plans in place to do the same with Campus Rec’s outdoor fields.

Three of Campus Recreation’s largest facilities can serve as good litmus tests for its sustainability progress and potential improvement. Let’s take a look. 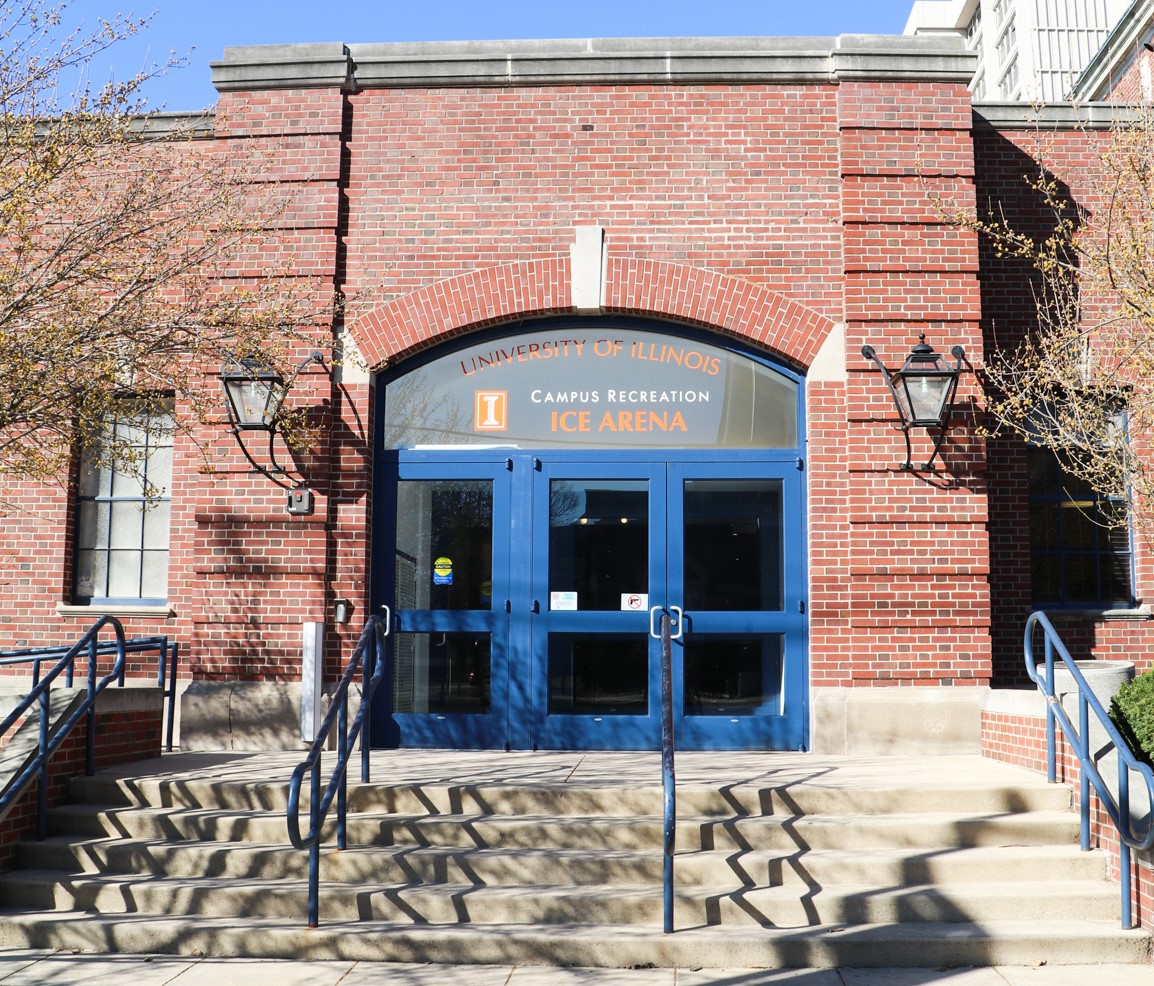 Built in 1931, the Campus Ice Arena has retained its original use to this day. While the university has long enjoyed the wildly entertaining, if cold, benefits of having its own skating rink, the building’s design leaves much to be desired in terms of efficiency.

The arena is entirely brick. While brick fits seamlessly into the campus’ architectural milieu, it also notoriously lacks any insulating properties; the refrigeration system has to expend significantly more energy to keep the ice icy.

No one’s specifically to blame. The Ice Arena was built at the onset of the Great Depression — a time when frugality trumped efficiency. Plus, even though the Great Plains were being ravaged by the Dust Bowl, scientists had made little connection between human industrialization and a negative impact on the environment. The term “climate change” wouldn’t be coined for another 30 years nor regarded as urgent for another 70.

At present, two things are true: 1) We live in a time when climate change is urgent; and 2) according to former President of the American Institute for Architects Carl Elefante, “The greenest building is the one that already exists.” So, what to do?

Thankfully, Campus Recreation has implemented several solutions. As its website reports, “between new cooling towers, a new (Astro-foil) ceiling, new lights, and a low-emissivity foil system, the energy load at the Ice Arena should be reduced by 30-45%.” Low-emissivity foil is an energy-saving surface; it keeps the cold in. 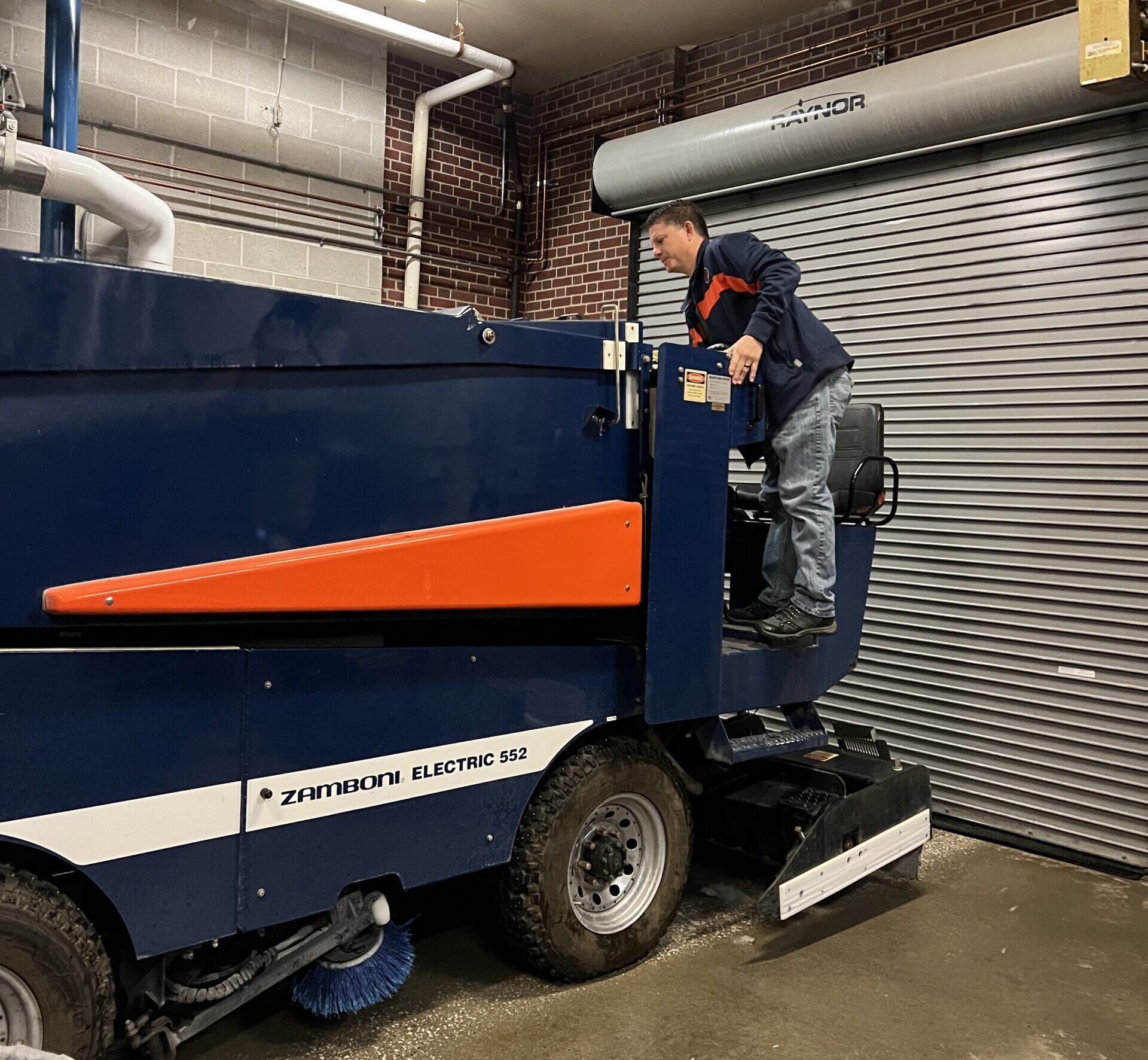 Though exact figures on energy savings weren’t available, the difference is still apparent. The old cooling system lies out of use and permanently locked away in the basement, an image straight out of an H.G. Wells novel — cobwebbed cast iron tanks, rusted wheels, and a maze of pipes crowd the room. At one point, a blast of steam shrieked out from God-knows-where.

“We decided to move on to something that wasn’t going to break every year,” Ice Arena Director Bill Zeman said. The new refrigeration system, installed five years ago, sits atop the Ice Arena’s roof. “It runs really efficiently,” Zeman said, “especially during the colder months.”

Although the Ice Arena is still made of brick, Campus Rec’s efficiency upgrades are most certainly a start and represent integral steps toward sustainability. Combined with two electric Zambonis — most arenas use propane — a reflective ceiling, and that shiny new refrigeration system, the Campus Ice Arena seems to be on its way. 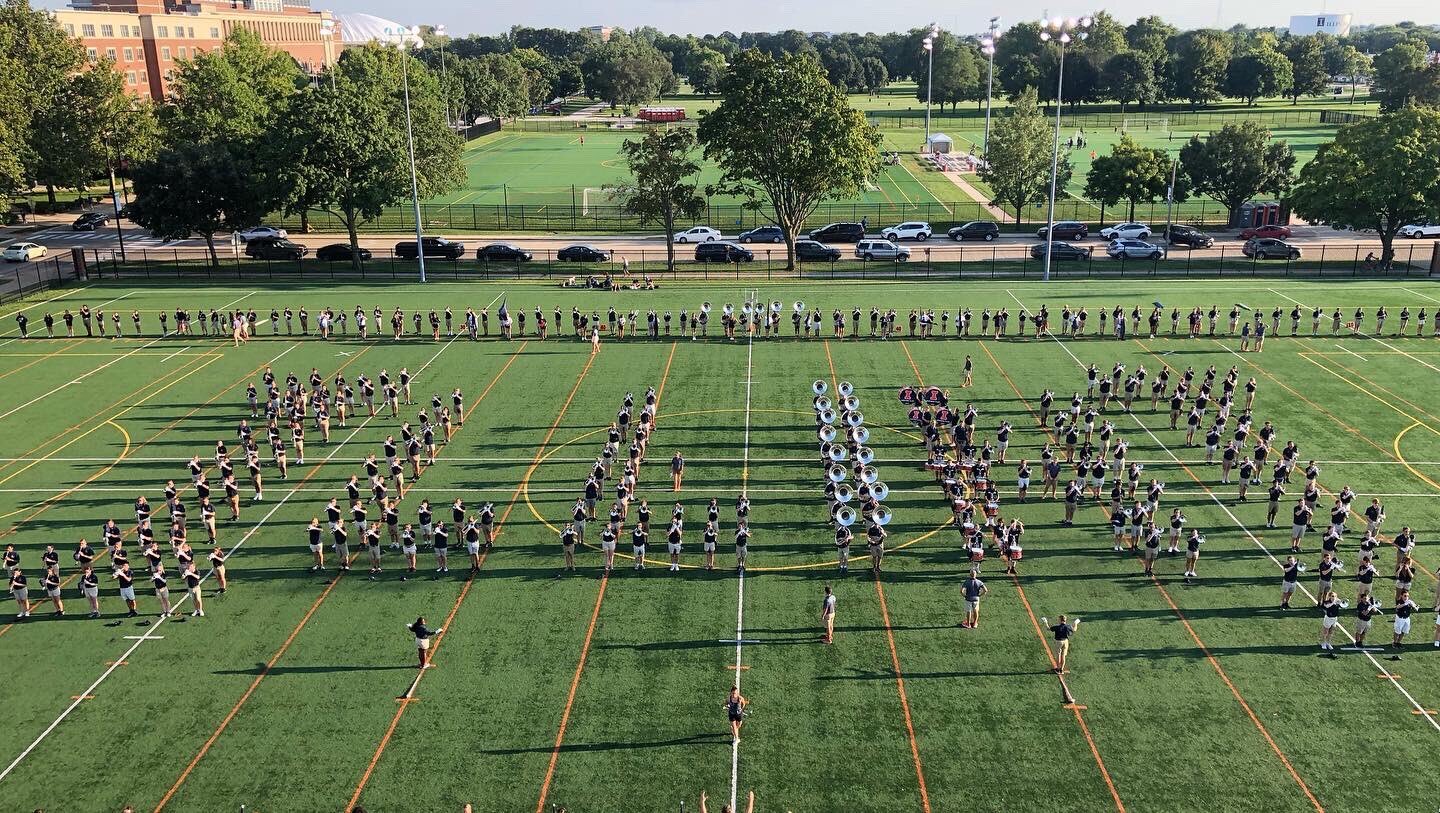 Home to a host of intramural sports, as well as Marching Illini practices, Campus Recreation has converted 295,000 square feet of its field space from natural to artificial turf. This initiative is listed under the “How We’re Green” section of Campus Rec’s website.

Scientists disagree on which option is more environmentally friendly. In 2009, the University of Arkansas published a report citing how synthetic turf’s makeup, lifespan, and overall artificiality result in more carbon emitted compared to regular grass.

Plus, artificial turf requires not only a foundation made of concrete — a huge carbon emitter in and of itself — but also a replacement every decade or so.

That’s one side of the fence.

On the other lies good, old-fashioned, natural grass. Grass turf supports (somewhat) a natural environment. It naturally intakes carbon and cools its immediate surroundings, unlike its artificial counterpart. Its maintenance, though, is a continual environmental catastrophe.

Scientists at the University of Delaware found that grass maintenance, which is overwhelmingly gas-powered, emits about a kilogram of carbon every year for 1 square meter of grass. Most leaf blowers and lawn mowers are far less efficient than cars; a whopping 5% of the entire U.S. carbon output is attributed just to grass maintenance, according to the EPA.

Watering residential lawns consumes more than 7 billion gallons of water every day — 50% of which is estimated to be “wasted due to evaporation, runoff, or over-watering,” according to the Grand Strand Sewer & Water Authority. This number increases exponentially after accounting for the country’s thousands of golf courses, parks, and recreation fields. As an added bonus, 3 million tons of nitrogen-based fertilizer used in the U.S. every year often finds its way into water runoff, polluting the water stream.

These, and a variety of other factors, led scientists to publish a 2014 study in Environmental Science & Technology that concluded “that the environmental impacts of artificial turf fields were lower than equivalent grass fields.”

While the argument of artificial turf vs. natural grass may be more or less an environmental toss-up (with artificial turf gaining a slight edge), Campus Rec decided to pivot toward the former — one of many examples to come of how the more sustainable option is also the most cost-effective. 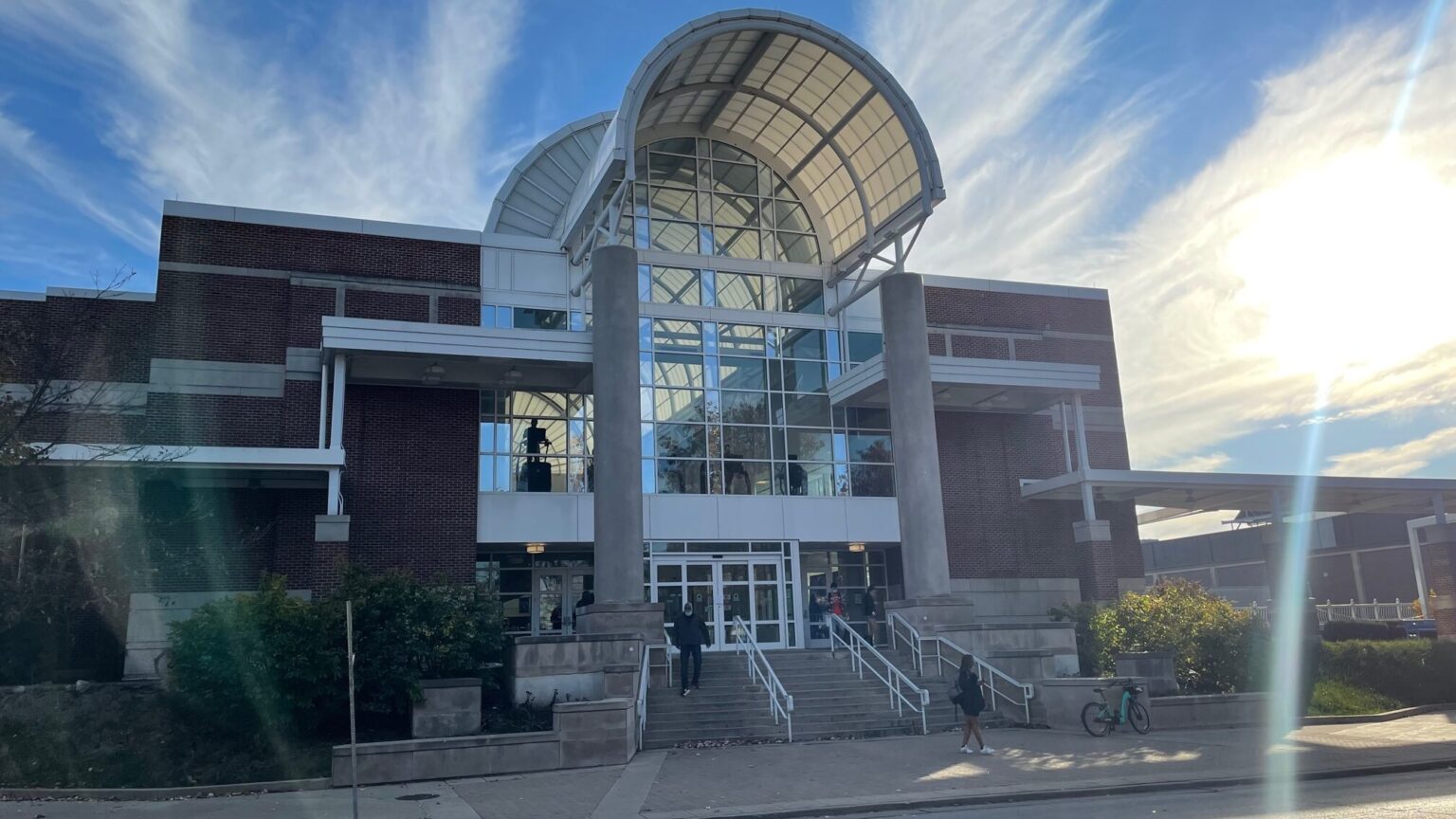 If Campus Recreation operates daily like a working body, then the Activities & Recreation Center (ARC) lies at its very heart. This 340,000-square-foot megaplex holds three gyms, two pools, and equipment for almost every sport imaginable.

“At one point, the ARC was the sixth largest energy consumer on campus,” said Assistant Director of Facility Operations Mike Merriman. The ARC requires 20 air handler units running 24/7 for proper climate control, guzzling the largest portion of the building’s energy.

The environments that require the most intricate temperature control are the pools. Both the indoor and outdoor pools — each a behemoth in its own right — require a consistent temperature of 82˚F.

“All of our pools,” said Cody Demas, Assistant Director of Aquatics, “are operated with steam heat.” This steam is generated at the Abbott Power Plant — not ideal in terms of sustainability.

But things are starting to change in terms of how Campus Rec gets its energy. “We’re not using inefficient means to create our newer projects,” Demas said.

Almost 10 years ago, the ARC installed a solar heating system for both pools. It doesn’t account for much, only about 10 percent on the sunniest of days, but it is a start, especially for the bottom line. “Most of the pool is heated with steam, but that 10% — the dollar and cent savings are considerable,” Demas said. “The little things over the course of time really add up.”

Most everyone at Campus Recreation framed their sustainability efforts in the same way — the number of dollars saved. When the entire ARC was converted to LEDs: money saved. Campus Rec’s plan to convert their fields’ lighting from high-pressure sodium to LED’s: “We will save,” Merriman said with conviction. Money was saved especially when members of Facilities & Services’ Retro Commissioning Team (our campus’s unsung climate heroes) came to adjust the aforementioned 20 air handlers. 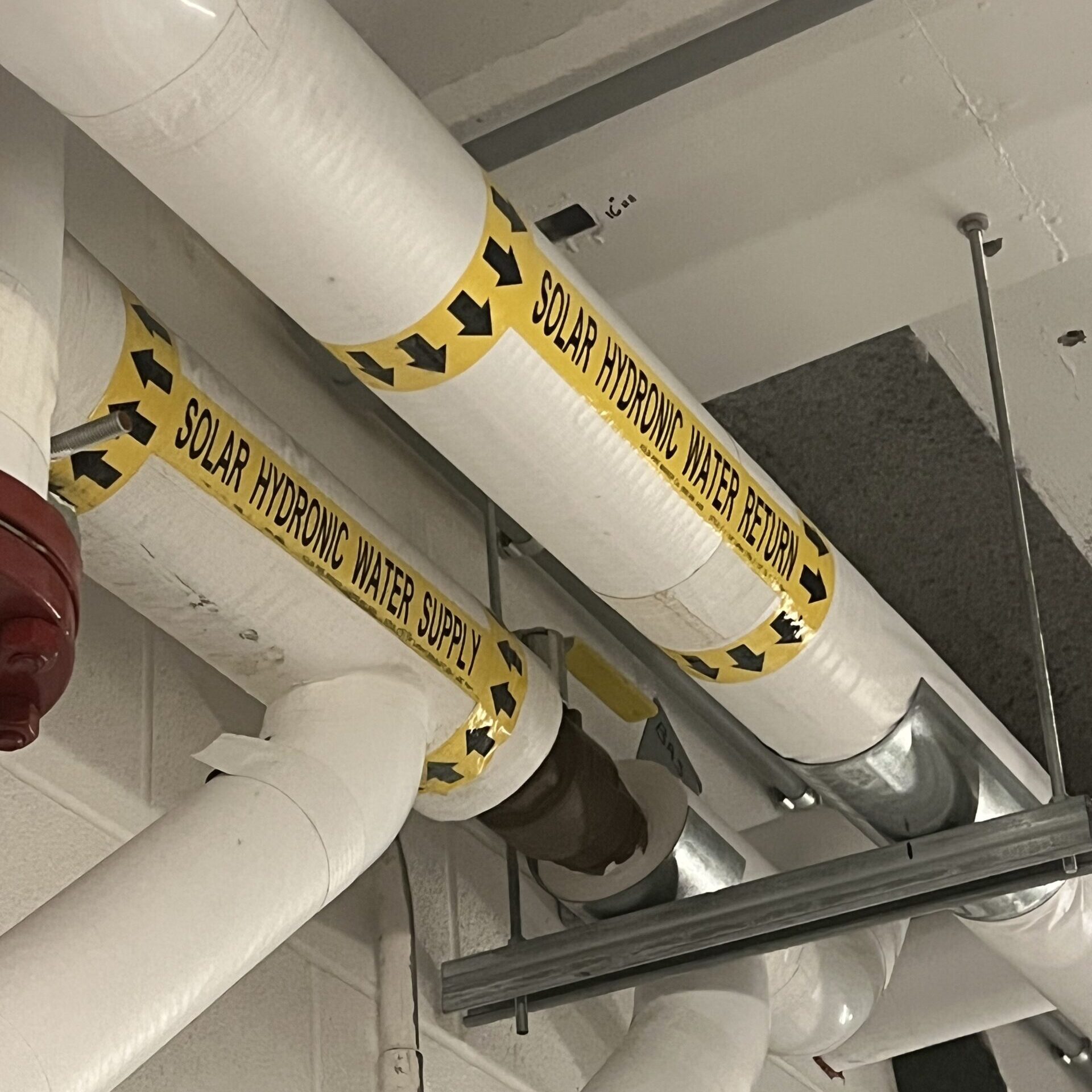 According to Merriman, “It cost us half a million dollars to have everything tweaked, tuned to perfection.” Such small tweaks paid big dividends. Campus Rec made up that $500,000 in the following two years and has saved money (and energy!) every day since.

Those air handlers, by the way, are uniquely efficient. “If there’s not a lot of people in a certain area, (the air handler) senses that and slows the fan down.” Therefore, the fans rarely run full-blast; one was only at 34% power during a recent visit.

Portraying sustainability in terms of money saved is a double-sided coin. On one side, it doesn’t frame efforts as sustainable for its own sake. “Sustainability” was not mentioned in either of Campus Rec’s 2020 or 2021 annual reports. But the fact that becoming sustainable has continually proven to be the money-saving option makes it the clear choice moving forward. And the attitude seems to be contagious.

Given the ARC’s huge footprint, Merriman would love to see its roof covered in solar panels. Demas is exploring how to boost the pool’s solar heating load to 11% or 12%.

“Campus Rec has a great product today. What can we do to make tomorrow even better?” he asked.

Like all of us, Campus Recreation has some habits that it’d be better off without. But next time you find yourself at the ARC working off the holidays on the treadmill, just know Campus Rec is right there with you, keeping pace in the race against climate change.