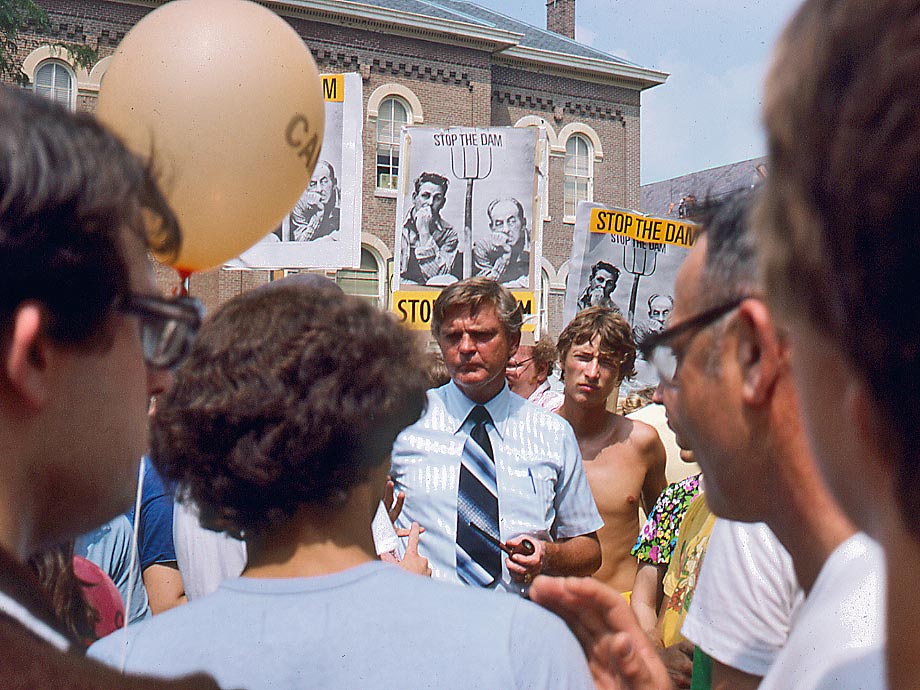 Gov. Dan Walker addresses students at a SECS “Stop the Dam” protest on the Quad in the early 1970s. Photo courtesy of John Marlin.

In summer 1969, Cleveland’s Cuyahoga River caught on fire. Sparks from a passing train had ignited the water’s greasy, polluted surface, and a subsequent Time magazine photo spread brought the apocalyptic scene into households across America.

A few months earlier it was the Pacific drawing headlines, when an offshore well spilled 200,000 gallons of oil onto the coast of Santa Barbara. The public, still jittery from recent reports on the health hazards of car emissions and pesticides, had had enough.

On April 22, 1970 — the very first Earth Day — 20 million people rallied for sake of the environment. It was a nationwide event, part protest and part educational campaign. The University of Illinois at Urbana-Champaign participated, too, under the organization of a newly registered student group called SECS.

Back then the acronym stood for Students for Environmental Controls. They were a handful of students who organized specifically for the purpose of staging a program around Earth Day. Under the leadership of Ernest Dunwoody, an Australian graduate student in Cell Biology, founding members of SECS spent months in an office provided by the University YMCA, preparing “Environmental Crisis Week.”

From Saturday, April 11, to Sunday, April 26, speakers, panels and films addressed a full slate of environmental topics, from ecological preservation to population expansion. On the Quad, a car was tried and found guilty of environmental destruction, and sentenced to a sledgehammering. A few blocks away, students cleaned up the Boneyard Creek, from Wright Street to University Avenue. Buses shuffled volunteers from neighborhood to neighborhood on educational outreach tours. 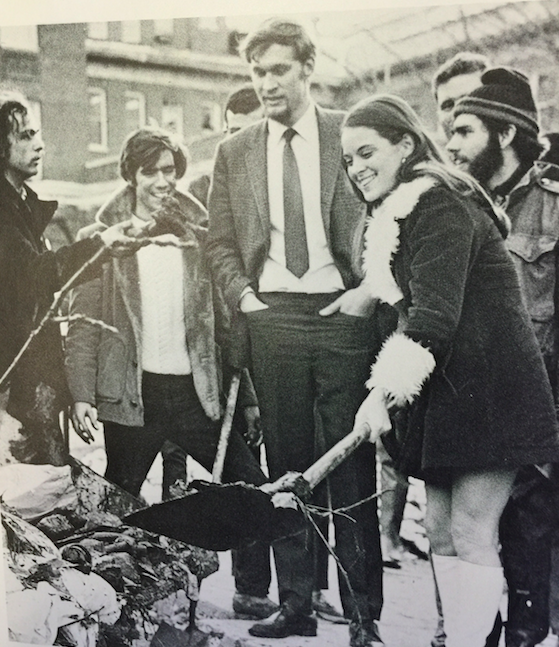 Sharon Mitchell, Miss Illinois 1969, joins SECS members in cleaning debris out of the Boneyard Creek during Environmental Crisis Week in April 1970. Photo courtesy of the Illio.

The week inspired and mobilized students of all ages and majors, popularizing environmental activism on campus. Despite their shared sense of urgency, the atmosphere was not one of fear, but of possibility.

“We were the generation that watched a man land on the moon,” said Diane Marlin, who joined SECS as a sophomore in 1972. “We were idealistic. We really believed we could make a difference. We still do.”

Diane Marlin’s optimism and warmth served her well when she recruited for SECS at Quad Day, the university’s annual event for student group registration. That’s according to Greg Lindsey, who was a new student from the small town of Huntley, Ill., when he joined SECS in 1973. SECS had a large participant list but “more ideas than people to carry them out,” Lindsey said. “I volunteered and ended up being in charge, as a freshman, of Earth Day 1974.”

It wasn’t long before Lindsey rose to SECS’s highest rank of Coordinator, a position he held until 1976. During his tenure, the volunteer pool grew into the hundreds. Lindsey oversaw monthly meetings in the YMCA’s wood-paneled Latzer Hall, where focus groups sprung into being and evolved based on member interests. Committees formed on recycling, land use, rivers, bicycles, freeways, suburban sprawl, and more.

“There was a committee to save the whales. Another subgroup was involved with preserving the Alaska Range. Pick a topic, and there were SECS members involved with it,” former SECS student leader John Marlin said.

Many committees took seriously the environmentalist directive to “think globally, act locally.” In the absence of a local recycling program, SECS members organized paper and glass recycling drives at the Assembly Hall. When the air pollution caused by Humko, a food processing plant in north Champaign, became unbearable for the surrounding community, they circulated petitions and organized neighbors to testify against the company. They campaigned for a bikeway between campus and Urbana, and for a one exuberant month in 1973, all automotive through-traffic on California Avenue was suspended.

In addition to pursuing their own causes, SECS members provided logistical support to other organizations, to help get things done that would have been difficult for smaller groups to do on their own. According to founding member Bruce Hannon, then a young faculty member, “SECS was always able to put a bunch of people in the field, to get letters, do demonstrations when necessary.”

The most celebrated collaborative success in SECS’s history is the “Save Allerton” movement, a campaign that sought to block the construction of a dam that could have destroyed the popular, university-owned Allerton Park.

Another local group called the Committee on Allerton Park, made up of faculty and local community members, had united in the late 1960s to protest the proposed Oakley Dam. Designed by the Army Corps of Engineers, the dam was a federal public-works project that aimed to create an alternate water source for the city of Decatur.

This benefit would come at a high cost. In addition to its multimillion-dollar price tag, Oakley Dam was slated to cause irreversible damage to the Sangamon River ecosystem, to flood surrounding farmland, and to require flood easement on around 75 percent of Allerton Park. 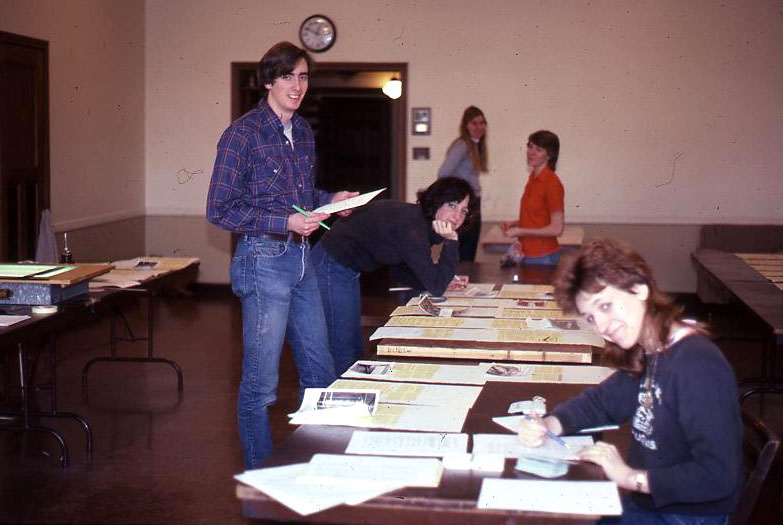 SECS Coordinator John Thompson (center) works with fellow SECS members on the layout of a SECS newspaper in the mid-1970s. Photo courtesy of John Marlin.

SECS joined the fight to save Allerton in 1971, guided in large part by John Marlin, then an aspiring entomologist working on a bachelor’s degree in biology. At the end of his senior year, with just six credits left to graduate, John Marlin threw all of his energies into “finishing off” the dam. He started by playing to members’ strengths as researchers. With the help of SECS, he put out a book called Battle for the Sangamon: The Struggle to Save Allerton Park in 1971. Part critical analysis and part impassioned plea, the book is a meticulous documentation of all the problems with the proposed reservoir, with contributions from a wide range of illustrious University of Illinois professors.

But students did the brunt of the work.

“At 5:05 the [Center for Advanced Computation] building emptied out of all its staff, and John’s crew would move in and start typing up all the articles from the various professors,” Hannon recalled. “Every evening we would do that. It was an enormous amount of work, to produce a book and keep revising it. But the result was marvelous.”

For years SECS persevered. Members printed newspapers and fliers, and leafleted whole towns in the flood area. They made “Stop the Dam” bumper stickers and posters. They demonstrated, chanting their own slogans (“Keep the Army out of Allerton!” “Only You Can Prevent Forest Floods!”). Their letter-writing drives at the Illini Union could produce 1,500 letters in one fell swoop.

“(U.S. Sen. Charles H. Percy, R-Ill.) used to say he got more mail on the Oakley Dam than he got on the Vietnam War,” John Marlin said.

However, there were many other dams planned in Illinois, and a whole lot more in surrounding states.

“We figured out early on that we weren’t going to stop Oakley Dam by just being organized in central Illinois,” John Marlin said.

He began taking students and local farmers to Springfield and Washington, D.C., to fill hearing rooms with people plastered with words “Stop the Dam.” John Marlin, Hannon, and other advocates created the Coalition on American Rivers, an organization dedicated to stopping Army Corps of Engineer projects nationwide. They connected with major environmental agencies and community members in impacted areas, and started organizing all over the country, “to the point where a lot of congressmen and senators couldn’t support dams anymore because of public opposition,” John Marlin said.

Based on this advocacy work, political support for the dams evaporated, and with it federal funding. Though Congress would not deauthorize Oakley Dam until 1985, its chances of being built were over a good ten years earlier.

The defeat of Oakley Dam wasn’t just a local victory. The effort, John Marlin said, helped lay the groundwork for changes in national water policy. The work left its mark on SECS members, too. Although John Marlin finished a Ph.D. in Entomology, he spent the rest of his career working on environmental and conservation issues, first as a member and chair of the Illinois Pollution Control Board and later as a senior scientist for the Illinois Sustainable Technology Center (ISTC), a division of the Prairie Research Institute. Hannon continued at the University of Illinois as a Professor of Geography and Geographic Information Science. Both remained active with the Coalition on American Rivers, which later evolved to become the Prairie Rivers Network.

Lindsey is now a professor of Urban and Regional Planning at the University of Minnesota, specializing in environmental planning and management. Before starting his doctorate, he served as a University of Illinois YMCA staff member and helped launch the community recycling center in Urbana. And Diane Marlin put her energies into civic leadership while working at Parkland and the University of Illinois. An Urbana City Alderwoman since 2009, she was elected Mayor of the city in April 2017. She can still be found among the political tables at Illinois’ Quad Day each year, registering students to vote.

And across the Quad, in the service and volunteer corner, a fresh cohort of SECS members continues to promote environmental projects and search for new recruits. Hands still reach out for fliers, which this year proudly boast, “Savin’ the Earth Since 1969.”