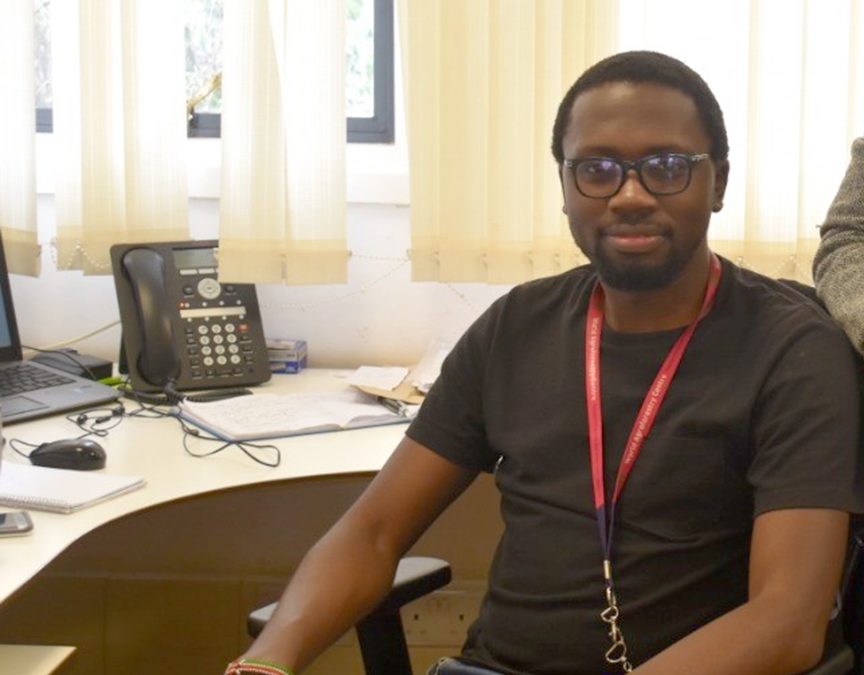 Nictor Namoi could have studied anywhere in the world, and he chose to travel all the way from Kenya to the University of Illinois Urbana-Champaign to maximize the sustainability of bioenergy crops.

Namoi received his bachelor’s degree in Management of Agroecosystems and Environment and his master’s degree in Land and Water Management from the University of Nairobi. After graduation, he worked with the World Agroforestry Center (ICRAF) for four years before deciding it was time to return to school for a Ph.D. At the U of I, Namoi works with the Next-Generation Feedstocks and Emerging Bioeconomy project, an initiative doing the preliminary work of making sustainability accessible and equitable to farmers. 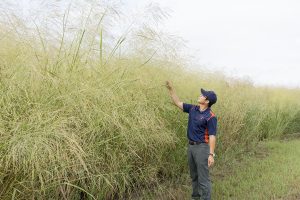 Namoi and PI D.K. Lee were compatible from their first meeting. Pictured: Lee with a switchgrass variety cultivated at the Illinois Energy Farm.

Namoi decided on the University of Illinois thanks to Principal Investigator D.K. Lee’s niche research expertise. The two met at a 2018 American Society of Agronomy (ASA) and Crop Science Society of America (CSSA) conference in Baltimore shortly after Namoi arrived in the United States on a U.S. Department of Agriculture fellowship at the University of Missouri. Namoi knew he wanted to study how to best manage agriculture to maximize ecosystem services. Lee was working on something similar: studying carbon sequestration, the nitrogen cycle, and greenhouse gas emissions (GHG) from perennial grasses in row cropping. Namoi and Lee hit it off, and the rest is history.

Unlike Illinois, Kenya does not have large-scale agricultural operations. Instead, the African country hosts numerous small-scale agricultural systems, on which many farmers and their families heavily depend. Unfortunately, countries in the Global South like Kenya are disproportionately affected by climate change-induced severe and unpredictable weather patterns, which inhibit successful farming. The dichotomy of this phenomenon and the lack of sustainable solutions is what attracted Namoi to sustainability.

“In Kenya, we’re trying to find the best technologies for farmers to improve productivity,” he said. “Since most Kenyan farmers are small-scale, we also have to find the cheapest options for them. So I want to find out the best way to enhance the sustainability of small-scale agriculture in terms of long-term productivity and ensure those technologies will be environmentally and economically sustainable for small farmers.”

With the Next-Gen Feedstocks project, Namoi specifically studies the ecological benefits of incorporating perennial grasses like switchgrass into agricultural fields, and he pays very close attention to nitrate leaching and GHG emissions from the soil. Namoi also looks at the profitability of switchgrass in comparison to the traditional corn and soybean operation. 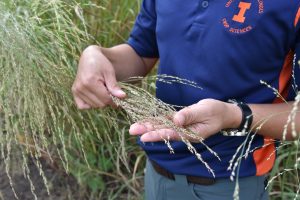 Next-generation feedstocks might have huge impacts on the regional agricultural system. “It is going to help us recommend to farmers management practices to best maximize the productivity of marginal lands and to best reduce the impact of agriculture on the environment,” Namoi said.

iSEE’s $5 million interdisciplinary project also holds global significance: It is essential to bringing bioenergy crops into the mainstream agricultural system. Currently, bioenergy crops are not as profitable as typical commodities like corn and soybeans because the former is simply not incentivized. What Lee’s team aims to do is to identify the tangible ecosystem service benefits of energy crop production and then communicate that information to farmers.

“Bioenergy crops do not require as much management as your typical crops. So, farmers can spend way less time in terms of management, and that’s a financial benefit. Still, bioenergy crops may require more investment, and it’s difficult for farmers who are already struggling with profitability to make additional investments targeting the environment that do not show immediate financial benefits,” Namoi said.

Basically, bioenergy crop production has its pros and cons, just like any other agricultural product. The iSEE project ultimately aims to bolster its pros, and then make them accessible.

“First of all, we have to make sure our research is right; second, demonstrate tangible benefits of bioenergy crop production; and third, show farmers that they don’t have to make sacrifices in terms of the economics,” Namoi said.

After completing his Ph.D. a few years down the road, he plans on pursuing a postdoc education at a research institution like the University of Illinois. In the meantime, Namoi avidly follows sports like rugby, soccer, and most recently, football.

“Nowadays I spend more time watching American football than soccer!” he said. “The only thing I hate about it is, I’m a Cowboys fan. They lose most of the time. But I’m in too deep already, so I just have to hang in there!”

Eventually, Namoi plans to work in agricultural research in developing countries, including Kenya. Though that nation’s current agricultural focus is on food security rather than bioenergy production, lessons on management options for enhancing both productivity and ecosystem services are certainly applicable to ensuring the sustainability and resilience of all cropping systems. After his time in the U.S., Namoi hopes to use his newfound ecosystem services knowledge to contribute to research and discussions around agriculture and sustainability in developing countries.