“Before finding high-performance computing and scientific visualization, I really didn’t know what area of computer science I wanted to work in.”

It might come as a surprise that Colleen Heinemann, a Ph.D. student in the Informatics Department at the University of Illinois at Urbana-Champaign, wasn’t always convinced of her passion within computer science. Through curiosity, determination, and refusing to remain in her comfort zone, Heinemann unites her strengths in research and creative problem-solving with her scientific interests to blaze new trails in high-performance computing (HPC) research. 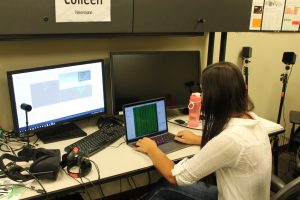 Heinemann began her undergrad at Bradley University studying Computer Science and Animation, interested in both but unsure of how they might add up to a career. Undeterred by the unknown, Heinemann turned her uncertainty into an advantage, and embraced every opportunity that came her way to apply her skills in and out of the classroom. In her senior year, one of these opportunities — a Blue Waters internship at Illinois — ended up changing her life. Working with the supercomputer introduced Heinemann to real-world programming and sparked the realization that HPC and scientific visualization could come together.

“This is exactly what I want to be doing,” she said. “I can’t imagine doing anything else.”

After taking a job with the visualization department of Lawrence Berkeley National Laboratory in California, Heinemann swapped West Coast weather for Midwest winters and returned to Illinois to pursue a doctorate in the U of I’s Data Analytics and Information Visualization program. Part of what drew her to U of I were interdisciplinary programs and an emphasis on merging multiple realms of study.

“I can have the HPC side, the general programming side, the visual side, and the science side,” she said.

The last of these is of particular importance to Heinemann, who has always been interested in the sciences.

“I knew that I wanted to somehow incorporate science into whatever I was going to be doing, but I didn’t major in biology or chemistry because I liked all of (the sciences), and couldn’t decide which one I liked best,” she said.

Now, Heinemann’s work with U of I’s Crops in silico project enables the jump from computer to life science via a field she never anticipated entering: plant biology. Crops in silico (literally, “crops in computers”) is a collaboration between iSEE and the National Center for Supercomputing Applications (NCSA). The project leverages computational modeling to optimize crops’ nutritional value.

“As populations continue to grow, we need more food … but the Earth is only so big, and there are only so many places that you can plant sustainable crops,” Heinemann said. “Rather than continuing to expand the number of crops, the idea is to maximize on what we have available.”

To do this, she uses a graphics technique called ray tracing to simulate how a beam of sunlight interacts with a specific point on a leaf. From there, she draws conclusions about how the plant photosynthesizes and how its nutrients can best be optimized.

“The plant can be constructed as a 3D model by triangles,” she said. “Looking at each individual point, or triangle, on a leaf, we can determine how much light hits it. That’s going to be the meat of figuring out how many nutrients you can get out of that plant.”

Heinemann is developing this software from scratch, so her work often begins as a “blank slate.” She appreciates the flexibility and mental agility required of the creative process.

“You’re continuously changing not only your short-term goals to a certain extent, but how you approach the goals,” Heinemann said.

Open-mindedness and willingness to think on your feet are necessary when diving headfirst into new research territory. Heinemann jokingly claims that she had “negative plant biology knowledge” prior to joining Crops in silico — but has since embraced the challenges of becoming fluent in a new field.

“One of my favorite parts is just learning about the other side of the spectrum, like the plant biology side, and not only what they’re doing within Crops in silico, but also what the people there have done as projects in the past, how that’s led them to be part of the team.”

Heinemann is grateful for the opportunity to learn from her peers.

“Every time I’m in a meeting,” she said, “I learn so much. Things I didn’t even know existed. It’s just crazy.” 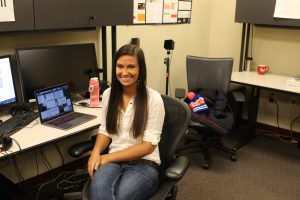 In addition to her own responsibilities as a student, Heinemann gives back to her community from the other side of the classroom. She is an instructor for the Champaign-Urbana chapter of Girls Who Code, a program designed to introduce middle school and high school girls to computer programming. Heinemann is also an instructor with the Blue Waters Student Internship Program and appreciates the opportunity to give back to the program that was so instrumental in shaping her own life.

“Most people might see it as a job, but I see it as my career, my job, my hobbies, what I do in my free time,” she said.

Though time-consuming, Heinemann is willing to give her all in pursuit of a passion she finds both challenging and rewarding.

“I knew what I signed up for,” Heinemann said confidently, “and I love what I do.”

Heinemann’s work at Illinois was featured in a video produced by Cray Inc. as part of a partnership with Intel.