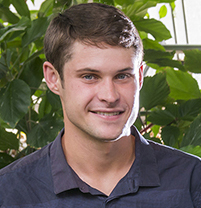 Ron Revord is a Ph.D. student studying plant breeding and genetics. Specifically, he focuses on the development of a new variety of hazelnut tree that will thrive and be profitable in mixed-species agricultural systems.

A featured plant in many of the test plots at the iSEE Agroforestry for Food project’s research site, the hazelnut can be an important part of the agricultural ecosystem. When processed, hazelnuts produce large amounts of oil that can have similar industrial applications as soybean oil. However, the hazelnut species currently available at nurseries are not bred for Midwest conditions, he said.

Modern soy has been engineered through breeding and genetic modification over decades to fight disease, repel pests and produce lots of food. To a large extent, hazelnuts have not been bred like this — but must be to become economically viable.

Ron is the beginning of that breeding program. In partnership with Rutgers University and sponsored by the Agroecology and Sustainable Agriculture Program, Ron identifies specific genetic markers for disease resistance and high crop production in a test group of hazelnut plants. When two plants with the identified desirable genes are bred together, he screens the offsprings’ genes to see if they possess enough of the desired traits. This eliminates some of the time-consuming trial and error in creating the next generation of plants — and researchers will need to create many generations to finally get all the required genes into one plant.

“Because of our collaboration with Rutgers University, we’re only seven or so years away from having a viable variety for commercial hazelnut production in the Midwest. That may come off as a lot of years … but there are zero varieties right now,” Ron said. Although hazelnuts have been selectively bred in the past, it was never with a Midwestern agricultural application in mind. He is starting nearly from scratch.

Growing up in Frankfort, Illinois — a southwest suburb of Chicago — Ron never imagined he’d be trying to engineer the agriculture system of the future, although he did figure he’d have a career in science. His father was a hobby aerospace enthusiast, and one of his favorite classes in high school was an AP Biology course.

Ron completed a Bachelor’s degree in Molecular and Cellular Biology at the University of Illinois in 2012. Unlike the majority of students in the MCB major, he wasn’t interested in a medical application of biology. Instead, he was looking for “something more applicable to big-world problems today.”

He found that something in sustainability. For the last two years of his undergraduate experience, Ron conducted undergraduate research on native biofuel crops with DoKyung (D.K.) Lee’s laboratory at the Energy Biosciences Institute’s energy farm. His time spent with this lab group deepened his interest in the feasibility of mixing ecology and agriculture.

During his senior year, he completed a tour alongside then-junior Kevin Wolz of Midwest farms practicing various forms of perennial mixed-species farming.

“In Wisconsin, we’d travelled through the typical fields when all of a sudden we were surrounded by 20-year-old orchards, and it’s different. It’s like an epiphany,” he said. “You see a real plot of species planted or intercropped that grow together on a mechanized commercial scale. You know this approach can’t universally transfer to other crops and environments right away, but with empirical research, wider use seemed viable.”

“That was the ah-ha moment that focused a career path for me.”

Ron jokingly describes himself as having an irrational love for the hazelnut. “What makes me love doing this work is it makes me feel I am having that broader societal impact,” he said. “If those breeding objectives for the hazelnut are met, there’s this whole new crop that farmers can adopt and produce profitably and have all of these subsequent environmental benefits they’re not currently having.”

He gets frustrated when woody polyculture isn’t taken seriously in the Midwest, even though it is a globally applied approach to agriculture. He tries to put a positive spin on it, saying that it just makes the science more challenging because of the extra scrutiny.

“You have to take a dynamic, nondirect approach to problem solving. I guess I do like that,” he said.

He is also encouraged by the progress made by the Woody Polyculture Project team so far.

“We were nonexistent last spring. The idea for the Woody Perennial Polyculture Site was nonexistent two and a half years ago,” he said. “And now the silly ideas we had by touring farms are a major research objective at a tier-one institution. There’s certainly not a lack of motivation from that fact.”