Not your average farmer: Kevin Wolz 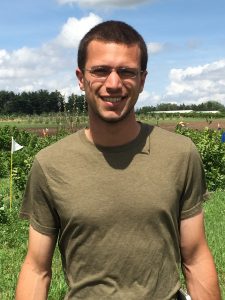 Kevin Wolz is a Ph.D. student in the University of Illinois at Urbana-Champaign’s Program in Ecology, Evolution, and Conservation Biology (PEEC).

At the Agroforestry for Food site, a project seed-funded by iSEE, he is most interested in the possible benefits of mixed-species cropping. Instead of planting just one species of nut- or fruit-bearing tree on any given acre (on its own better than corn or soybeans because trees sequester carbon and need less fertilizer and nitrogen), there might be benefits to planting three or four tree and shrub species all next to each other in a repeating pattern. In theory, he says, mixed-species acres should see a larger harvest, higher wildlife diversity, and healthier soils than than one-crop acres, but he won’t know the extent of benefits until the trees are more mature in several years.

To track the overall environmental effects of the single- and mixed-species agricultural ecosystems, he measures soil moisture and chemistry and plant growth — a job that can be intimidating on a 12,000-plant project, he says. He’s looking for the balance of nutrients in the soil: How much nitrogen or carbon, for example, is coming into the planted system, and how much is leaving? How well do the plants grow in this system, and how much sellable crop do they provide?

As an undergraduate at Illinois, Kevin completed dual Bachelor’s degrees in Civil and Environmental Engineering, and Integrative Biology.

“I love doing both [biology and engineering]. They’re very different perspectives on the world and on research. Engineers will try to find a problem – what issue is society having right now? – and how can use what we currently know to solve that problem? Biologists are more about what don’t we know, what don’t we understand, what is something that isn’t acting how we thought it would – and exploring that sometimes for the sake of exploring it,” he said.

While these fields might sound totally unconnected to some, he sees a clear meeting of the two in agriculture.

“I view agriculture basically as engineering. You have a system that needs to accomplish two different things — healthy ecosystems and food — on the same acre of land. As an engineer at heart, I look at it as an optimization problem,” he said. “You have this whole toolbox of plants, and you can arrange them and use them in any way you want. Then what informs how you do it is biology.”

Kevin grew up in the southwest suburbs of Chicago near a large forest preserve area. His love of biology and the natural world, he says, can be traced to many happy childhood days exploring the woods. In high school, he got involved with the local restoration community and participated in making degraded forests healthy again.

When he arrived on the Urbana-Champaign campus, he hoped to do more of the same.

“I quickly realized that restoration doesn’t work here,” he said. “There are no degraded prairies or degraded forests to restore because there are (virtually) none left, and all the land here is worth so much money for agriculture — and it needs to make a profit. Restoration inherently costs money; it doesn’t make anyone any money.” 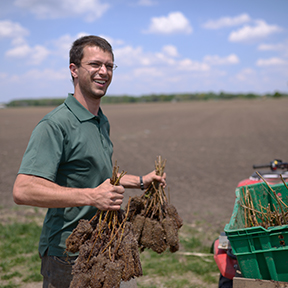 He didn’t give up on his goals for healthier ecosystems, however. He became interested in sustainable agriculture systems as a way to restore the natural balance of the land while also making money on the restored land. He started working with the original 2012 woody polyculture site during his junior undergraduate year.

“What really inspired me more than anything to continue studying sustainable ag are several farmers I’ve met who are doing this kind of farming. They’ve inspired me to hit the books to try to study to make it better to learn how to do it,” he said.

The greatest observation he’s made so far is how rapidly a polyculture planting can reinstate healthier environmental conditions.

“It’s absolutely amazing how in just two years how dramatically the whole biogeochemistry can shift. People look at this corn and soy system as ‘we’re so screwed. It’s too late.’ But you could just stop that, switch to this and within two years you’re back to ideal conditions. It’s mind-boggling!” he said. “That gives me hope that if we could get more people to do this then we could have a lot of impact pretty darn quick, which is awesome.”

In the short-term, Kevin is excited to finish his Ph.D. After that, he wants to strike a balance in his career between practical application and academia — perhaps as a professor or consultant with some land of his own for a polyculture farm. He looks forward to the day when he can drive by the Multifunctional Woody Polyculture site and say, “One day I was planting what looked like sticks in the ground. Now look at it!”