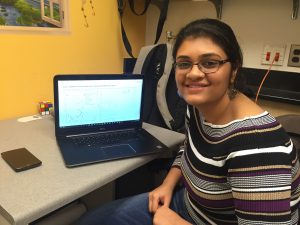 Ph.D. Candidate Kavya Kannan confidently sits behind her laptop explaining a series of charts and graphs. By looking at her screen, you’d never know that her computer — a manmade mixture of metals and complex engineering — allows her to enhance one of the earth’s most basic and vital processes: plant growth.

Working alongside a team of student and faculty researchers at the University of Illinois, Kannan’s work contributes to Crops in silico — a multiscale computer model that virtually predicts how a plant reacts when subjected to different environmental conditions. As a widescale research project, Crops in silico encompasses a variety of disciplines, including biology, chemistry, crop science, and bioengineering.

Kannan herself works with bioinformatics — a field in which scientists study biological data through a mathematical (and computer science-based) lens. Through bioinformatics, she can understand the “inside machinery” of plants to find out how they grow. Rather than studying full-scale plants in a greenhouse, Kannan observes reactions within the plant’s DNA — that long chemical code inside every plant cell responsible for how the plant looks, grows, and functions — all from her computer.

When looking at experimental data, she’s searching for indicators that show how environmental conditions affect the plant’s chemical balance — and whether certain shifts in that balance hinder or help its ability to perform normal functions to survive. For example, she might ask how atmospheric changes (such as increased carbon dioxide) affect the plant’s ability to make food for itself through photosynthesis.

“Basically all types of functions that are taking place in a plant happen through chemical reactions,” Kannan said. “In photosynthesis, there are some key players that might alter the whole photosynthesis machinery.”

These “key players” are genes and transcription factors. Within a strand of DNA are a bunch of different sets of instructions called genes. Genes serve as messengers, delivering instructions to the plant’s cells to tell them when and how to make a protein. What’s so important about a protein? When millions of cells work together, proteins enable actions that allow the plant to survive, grow, and adapt.

Meanwhile, the transcription factors — how protein alters the function or expression of other genes — are able to turn the genes “on” or “off,” effectively blocking or permitting gene messages to get through.

Transcription factors, and especially their interactions with genes, are Kannan’s focus.

“Usually all networks have a ‘hairball’ type structures, so it can be hard to decipher what type of information you’re going to get out of the network,” she said. “But when you actually create your own gene regulatory network with all the genes and their expressions levels, you can specifically choose the set of genes you are interested in and visualize how they are controlled by other genes they interact with.

“This way even a hairball can have hidden small pockets of information which is pretty cool to visualize and analyze.”

Just like a sound system technician works with sliders to adjust the volume or bass level of certain instruments in a song, Kannan virtually controls the “sliders” of the plant’s transcription factors in her computer — using a model built from what’s already known about how plant genes work. By virtually tweaking the factors that decide whether or not genes are turned “on” or “off,” she can observe internal changes within her subject plant.

“When studying these transcription networks in detail, we can see if a transcription factor is negatively affecting a gene through its interaction with the plant,” she said. 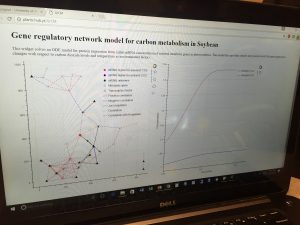 By seeing which virtual tweaks help the plants to grow, she extracts the gene sequences for the whole plant to see how much they’ll be expressed when grown in the greenhouse.

“This gives us an idea of whether this particular gene is affecting the expression of other genes,” Kannan said. “It’s also one of several ways to validate our cause and effect. That is, the mutation of that gene and the change in the functioning of the metabolic pathway.

This “back and forth” ultimately helps to better understand how a plant virtually responds to our changing CO2 levels in photosynthesis.

Just as plants have to modify their own growth machinery in changing conditions in order to survive, Kannan has modified her educational path. Originally interested in medicine, she was always fascinated by biological systems.

“If I didn’t take biology as my concentration in high school, I would’ve never known how amazing biology is,” she said.

She took her first bioinformatics class in college. Instantly intrigued, she took up bioinformatics as a major, and graduated from Sri Ramaswamy Memorial (SRM) University in Tamil Nadu, India, in 2013. She went on to complete her masters in computational biology from the University of Illinois in 2015 and is now working toward her Ph.D. in plant biology — the first time she’s ever studied plants in such great detail.

While Kannan’s educational background and knowledge in computational biology prepared her for her research with Crops in silico, the project still comes with challenges: She has had to “pick up” certain aspects of plant biology she hasn’t previously studied.

“Being primarily a computational biologist so far, I am slowly getting into the field of experimental biology,” she said. “My lab mates are one of my biggest help since I’m still learning a lot of things about plants. They help to clear up even my dumb questions!”

The hardest part of the project, she said, pertains to the nature of her research and how it’s never been done before.

“In traditional research, one of the ways we come up with a hypothesis (to test) is by identifying a new research question based on already known literature and experimentally testing it. However, this is an area of research that’s particularly new,” she said. “When we do these network-based studies, we already have a preliminary idea of what is happening virtually in the plant system and how these transcription factors are virtually affecting the processes which will help us frame our hypothesis for performing experiments to test it.

“Computational biology is a way to help us bring more clarity to our research objective apart from just using previously known literature.”

Kannan’s work at the small-scale genetic level of the plant could help to solve large-scale problems in the future.

The ultimate goal of the Crops in silico is to aid in the ability to grow food globally — especially in locations increasingly affected by climate change. Using a detailed computer model like this one, crop scientists can target specific genes to modify to make plants cope better with higher temperatures, less water, more CO2 in the air, and other conditions expected with human-driven climate change.

“Even when I’m facing challenges with this research, I keep (the end result) in mind. The future is going to be amazing; it’s worth it,” she said.

Beyond potential global problem-solving, Kannan’s favorite parts of the research lie within the interdisciplinary work of the project itself, such as working with people from other fields and learning how to explain her work to non-experts. Most of all, she appreciates the unique blend between computational technology and the natural process of plant growth.

“When something is obscure, in theory, you can use computer science to get useful predictions so a plant biologist can understand their own “unknowns” better — that’s just so amazing,” she said. “This project translates computational information into meaningful biology.”