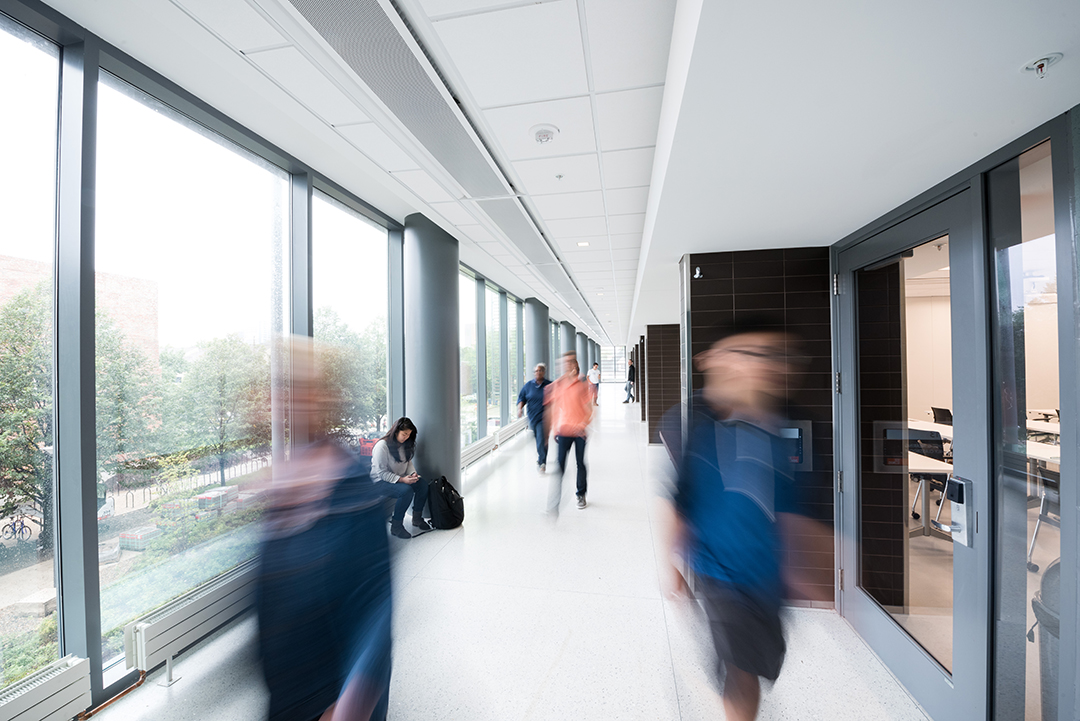 FEB. 5, 2015 — The new Electrical and Computer Engineering (ECE) Building on the northwest corner of the University of Illinois’ Urbana-Champaign campus may be called amazing for many reasons. Packed into the building’s 230,000 square feet are 18 classrooms, 21 instructional laboratories, 19 meeting spaces, and campus’ third-largest auditorium (seating for more than 400). For the first time in the department’s history, all ECE classes are under one roof. The building houses hundreds of pieces of state-of-the-art equipment, and its classrooms and instructional labs serve the needs of more than 4,322 students and 94 faculty each week.

The most amazing feature of the ECE Building, however, might be its sustainability. The building was designed to achieve LEED Platinum certification from the U.S. Green Building Council (its highest award) and to be a net-zero energy building — meaning that during a year it will produce as much energy as it consumes and thus will draw no net grid energy from fossil fuels. Two sets of solar panels, which have been funded by the Student Sustainability Committee, are expected to be installed on the building roof by March 2015, and another much larger set will be placed on the nearby parking garage when funds permit. The panels will generate all the electricity for the building.

While the LEED certification and energy efficiency were goals from the beginning stages of planning, no one anticipated that the building would reach net-zero, said Philip Krein, an ECE faculty member and Chairman of the department’s New Building Committee formed in January 2008.

“The challenge we gave the architects at the beginning was to design the most energy-efficient engineering building in the world,” he said. “I think it became clear as we did the modeling and the analysis and everything else that it would ultimately achieve net zero if we did it properly.” 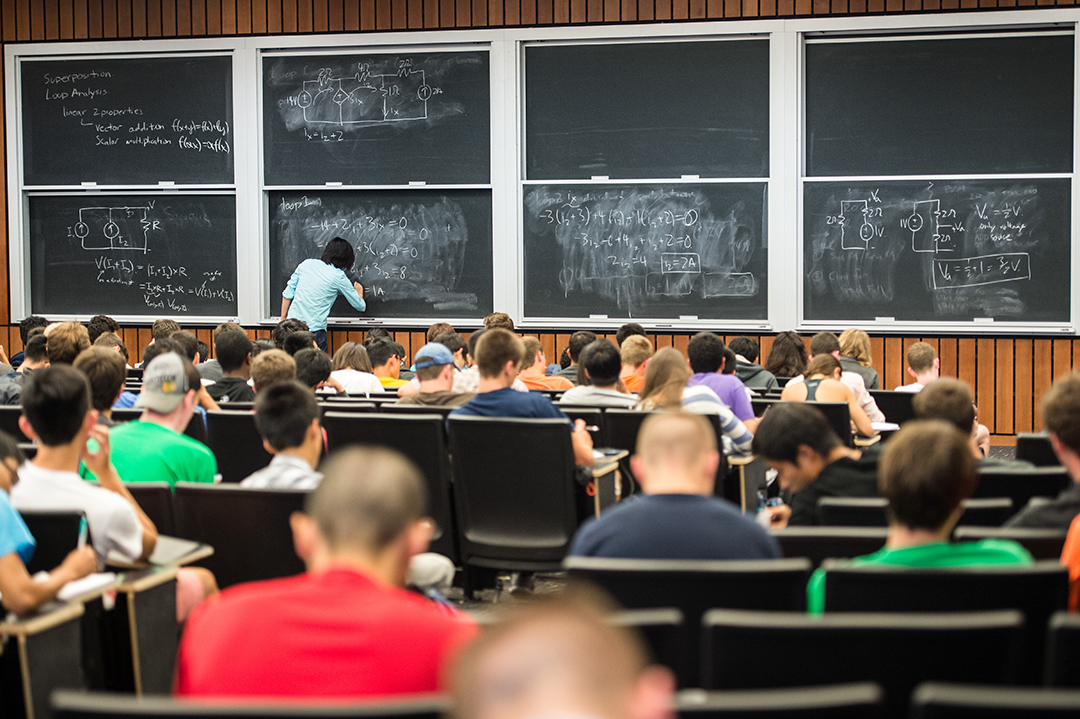 And properly done it is. Custom energy use models were created based on a list of must-have facilities and equipment compiled by Krein and his team in consultation with department faculty. Everything from the lasers and computer chip etching equipment to the heating, cooling, and lighting was accounted for by amount of time it would be in use. In every aspect, careful attention was paid to reduce the energy consumption. Krein has high hopes that the ECE Building will consume little more than half the energy that an average building of the same size and type would consume.

One of greatest energy consumers (in almost every building, Krein said) is the heating and cooling system. In the ECE Building, energy consumption is slashed by using a heat exchange system. In a normal building, outside air is brought in, heated or cooled to the desired temperature and then pumped throughout the building. In this case, however, outside air is brought into the building and brought into contact with the stale air that is already heated or cooled going out. The two groups of air trade energy — stale warm air in the winter trades heat with the fresh cold outside air making it a little warmer (and vice versa in the summer with cold inside air cooling hot outside air). Energy is saved by taking advantage of passive heat exchange because it takes less energy to heat air from, for example, 55 degrees after the exchange to 75 degrees than it does to heat air from 32 to 75 degrees.

Other energy savers in the ECE Building are less complicated to explain: 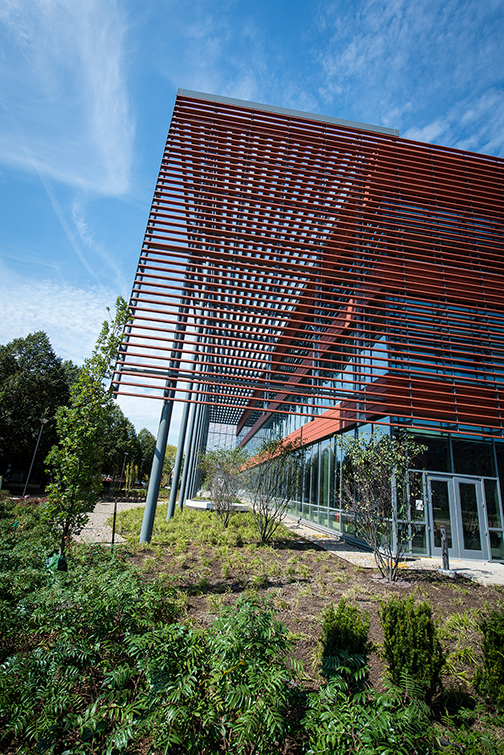 Even the parts of the building that seem decorative are actually sneaky sustainability features. The metal canopy above the south hallway is made to block hot sunlight in the summer but to let it in during the winter, and the distinctive orange tiles on the face of the building are made from terra cotta, an excellent insulation material.

The ECE Building demonstrates that “the little things” do add up when it comes to sustainability and energy efficiency.

“You have to pay attention to everything,” Krein said. “And in particular … it is all about the system. The things have to work together. For example, it is very hard to take an old house and put good insulation in it because there are leaks at all the seams and everyplace else. You spend lots of money, but it doesn’t work because you’ve got drafts coming around the window frames.”

At ECE, the New Building Committee, the architect team from SmithGroupJJR (led by Chairman David King), and construction team avoided this with the meticulous attention to details from planning to drawing to construction.

Krein cannot underestimate the importance the building has not only to campus, but also to the nation and world. While it is easy to design net-zero energy buildings in the warmer climates of the world (“You can do a net-zero building in San Diego just by leaving off the walls and putting in mirrors to reflect the light!”), he said, “in our climate — with hot summers and very cold winters — it is a different story. We’ve proved that if we can do it and do it cost-effectively that it can be done anywhere in the U.S.”

The building’s overall sustainability comes from the design, not necessarily a lot of expensive, complicated technology, Krein said. The “special stuff,” including the heat exchange system, only accounted for 10 percent of the building budget.

“The building shows that high-performance sustainable design can be done, and you don’t have to compromise,” Krein said. “Sustainability isn’t an extra cost thing; it is not gimmicky. It has the economic case behind it now.”

Ben McCall, Associate Director for Campus Sustainability at the Institute for Sustainability, Energy, and Environment, added that the upcoming 2015 revision of the Illinois Climate Action Plan — a guiding document for achieve carbon-neutrality on campus by 2050 — may include a requirement that all new buildings and major renovations must be net-zero energy.

“In that sense, the ECE Building is a true pathfinder project, leading the way toward a sustainable future,” he said.

One of the building’s most important impacts will hopefully be on students.

“We take seriously the university’s aspiration to have living laboratories,” Krein said. “We’ll see more (student recognition of the building) because we are building some things into the curriculum. We’ll have classes along those lines — we do have some already.”

The ECE Building is expected to receive LEED certification in 2016, after the department submits energy and other data for one year of building operation.

Have a question or comment about this article? Please email us.