Ilsa Kantola: Sustainable Farming has its Roots in Soil 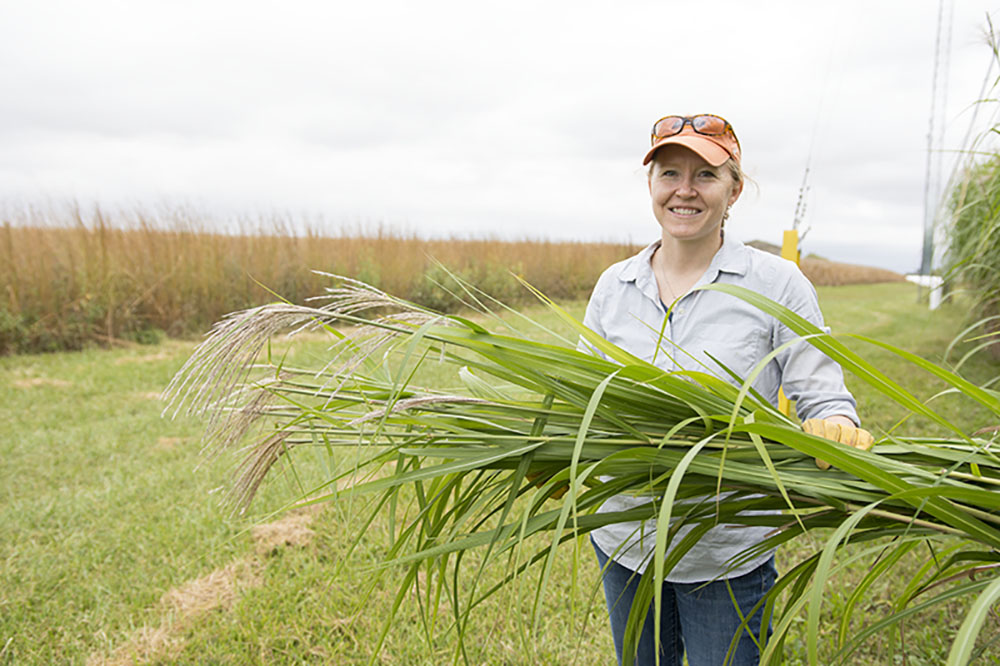 “From an early age, I was aware of farming going on around me, and the importance of land and soil to everything in our lives.”

Originally from Sacramento, a vibrant city nestled at the top of California’s Central Valley, iSEE Postdoctoral Research Associate Ilsa Kantola grew up surrounded by agriculture both geographically and genetically — Kantola’s grandfathers worked in the industry, and her father has a degree in Agricultural Economics. Living in a bustling metropolis did nothing to hinder Kantola’s bond with nature; on the contrary, she fondly recalls driving down country roads playing a game called “Name that Crop.”

“Which,” Kantola jokes, “can be a very boring game in Illinois.” 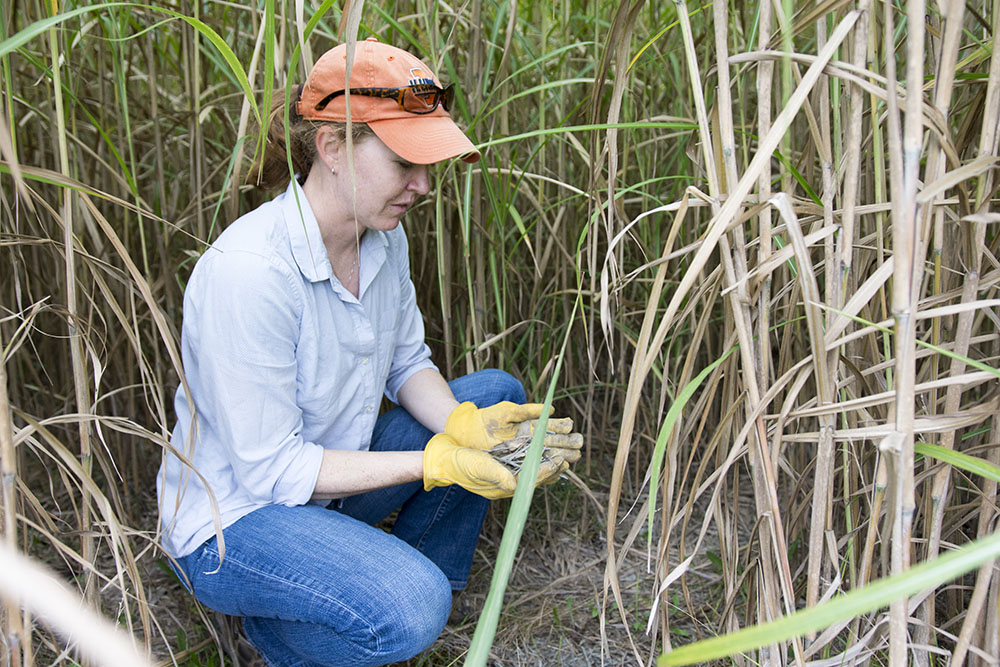 iSEE Postdoctoral Research Associate Ilsa Kantola in a Miscanthus field treated with an application of basalt at the Illinois Energy Farm. Photos by Jordan Goebig / iSEE

In her work at the University of Illinois at Urbana-Champaign, Kantola contributes to the industry’s most high-stakes conversation: the search for sustainable farming practices of global proportions.

Kantola has long been passionate about her current field: her bachelor’s degree from California Polytechnic State University is in Environmental Engineering with a Soil Science minor. Soil Science quickly developed into a central interest area — and influenced Kantola’s decision to complete her Ph.D. at Texas A&M in the department of Rangeland Ecology and Management, now Ecosystem Science and Management.

The decision to study soil in Texas was not a difficult one.

“It’s chemistry, it’s biology, it’s agriculture, it’s food, and it’s people,” Kantola says of her passion for the subject. “And it’s all together.”

While in Texas, she studied the methods by which woody plant invasion transforms south Texas grasslands into shrublands, with a focus on the behavior of soil-bound carbon, nitrogen, and phosphorus — her “trio of interests.”

“I worked in rangelands,” Kantola says of her department’s name, “but I did not work with cattle — I worked with the land they had taken cattle out of.”

When Kantola arrived at Illinois to work for the Energy Biosciences Institute (EBI), her focus shifted from Texas grasslands to Midwest croplands. Her team’s BP-funded study sought corn alternatives for the production of bioethanol — a naturally produced fuel supplement — and her objective was to measure the ecological effects of using perennial grasses as a substitute.

Native switchgrass and the Asian hybrid Miscanthus x giganteus grown at the Illinois Energy Farm were posited as promising alternatives because perennials — plants with life cycles longer than one growing season — require less management than annuals such as corn, with potential for similar or greater yields. Additionally, the Miscanthus variety grown at the Energy Farm cannot be consumed by humans or livestock, so bioethanol production would not come at the cost of a viable food source.

“We start small, digging at the farm. But U of I sites are representative of the larger Midwest, so data we collect can be scaled up to visualize what’s happening on a larger scale.”

The researchers’ process for capturing atmospheric CO2 involves two chemical reactions. First, atmospheric CO2 dissolves in rainwater to create carbonic acid. Then, the acid reacts with calcium and magnesium in the soil to form calcium and magnesium bicarbonate, soluble compounds that leach with soil water, resulting in the relocation of CO2 from the atmosphere to the water cycle.

To enhance this process, Kantola’s team turns to basalt, an igneous rock containing both calcium and magnesium as well as phosphorus and minor nutrients that can benefit soil fertility. Large quantities of finely-ground basalt are spread over twin fields of corn and miscanthus at the Energy Farm and left to react with CO2-laden rainwater.

“We’re trapping atmospheric CO2 in the water cycle so that it can move out through the drainage tiles, into the Mississippi, down to the Gulf, and potentially benefit the oceans. That’s the dream: that we can cure ocean acidification, reduce atmospheric CO2, and benefit our crops at the same time.” 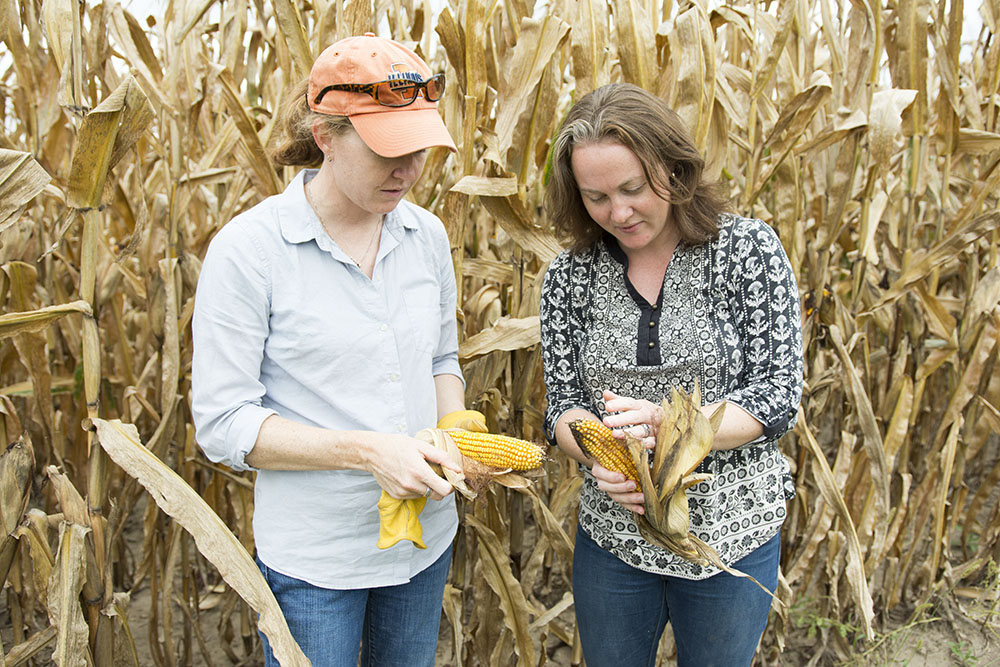 Kantola talks about corn with another University of Illinois Postdoc, Caitlyn Moore.

Because of basalt composition and soil fertility variation across climates and continents — and the potential for plants and soil microbes to change the rates of basalt weathering — LC3M collects data from three ecologically diverse locations. In addition to the temperate Midwest, basalt is similarly applied to a palm oil plantation in Borneo and a sugarcane field at James Cook University in Queensland, Australia.

“The project is getting global,” Kantola explains. “That was always the intention.”

Looking ahead, Kantola is excited by the prospect of data analysis. This might be several years away; Illinois researchers are currently in year two of a five-year basalt application program. Because basalt is slow-weathering, the initial application period is followed by five years of observation, during which annual yield and biofuel production data will be measured against control fields.

The sooner data is available, the sooner Kantola’s team can make informed recommendations to farmers and spark a chain reaction toward sustainable land management that reaches out into the atmosphere, the oceans, and beyond.

Kantola calls the project’s benefits a “double return:” “It’s a way to use land that’s already in production for biofuel to make an impact on the planet’s atmospheric health.”

Ideally, this project provides the scaffolding for a novel way to address one of the world’s most pressing issues while enhancing—rather than disrupting—traditional farming practices.

“We’re interested in disrupting some things that humans do to the Earth,” Kantola clarifies. “But if we can do so in a way that’s beneficial to food production and CO2 reduction, that would be the dream.”