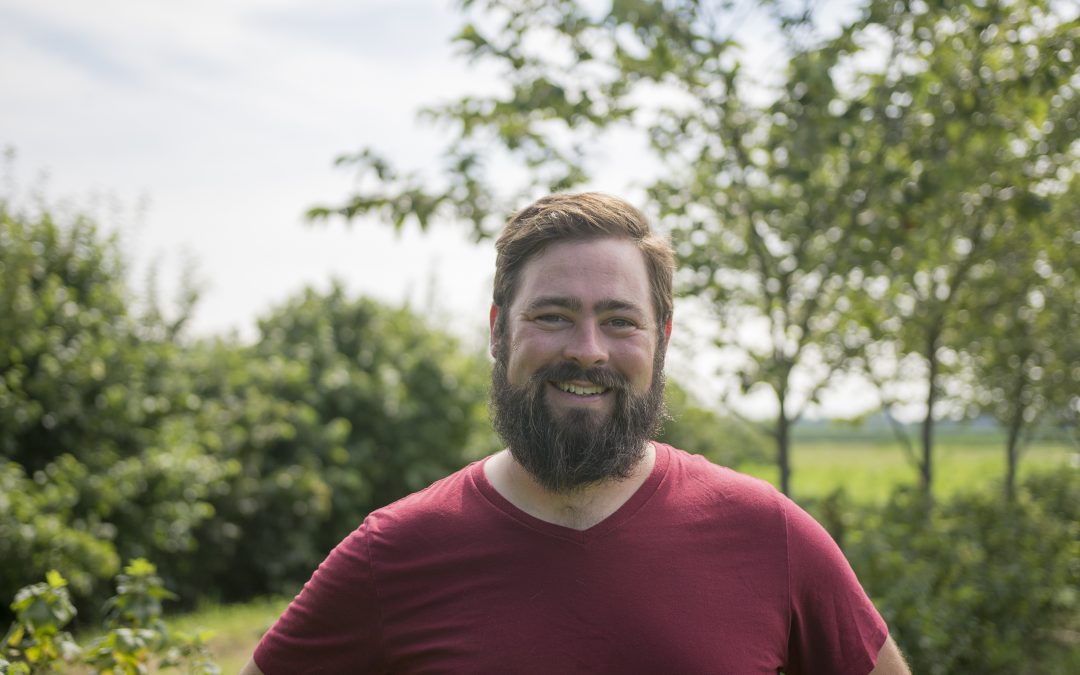 Eric Wolske, a member of Illinois’ Agroforestry for Food (A4F) team, has found a simple way to explain the project’s work:

“Agroforestry is growing crops with trees. That is the most basic level.”

Originally from the Champaign-Urbana area, Wolske decided to go to Southern Illinois University in Carbondale for his B.S. in Plant and Soil Science. That campus’ main quad is a forest, which was a big draw for Wolske. His college experience felt like trees were more than just campus décor.

“At the time I was more interested in booze crops: grapes, cider apples, all that fun stuff,” he said.

After earning his undergraduate degree, Wolske spent time working in a vineyard — Southern Illinois has a lot of these.

“I’m from the fruit side; I think even fruits could be more sustainable,” he said. “They’re already in a sustainable category. They’re perennials, they stay there. There’s a fairly low amount of tillage, but it just seems like there’s still a pretty big gap between getting all the potential ecosystems services and protecting your soil and everything else.”

His interest in sustainable agriculture eventually brought Wolske to the Urbana-Champaign campus. A huge reason that Wolske decided to come home for the Crop Sciences M.S. and Ph.D. programs here was the A4F project, seed-funded by the Institute for Sustainability, Energy, and Environment (iSEE), which is pursuing alternative agriculture options in the Midwest. 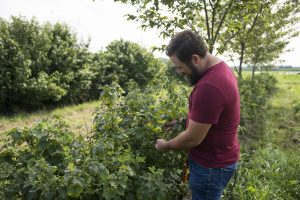 Wolske checking on black currants at one of the Agroforest plots.

Wolske’s master’s thesis focused on shade tolerance of black currants, a woody shrub that produces edible berries. This work transferred into Wolske’s Ph.D. research, where he is now testing shade tolerance across 24 species of currants.

“We’re just trying to see, is (shade tolerance) just in general that as a species it’s something they’re good at? Or are there traits that some varieties have that others don’t?” he said. “How can we help them perform better under shade?”

This passion for the environment and polyculture systems is evident when touring the experimental fields that Wolske has worked over the years. Every element used in experimentation was handmade, crafted, and recrafted (when the Illinois winds had other plans for his canopies).

“A ton of research still needs to be done to see if these systems have potential,” he said. “We’re starting to see, well they work this way, they don’t work this way. We’re puzzling it all out. And what we’re doing here is just scratching the surface.”

Walking through fields, you can see just how much agroforestry is trying to integrate diversity back into the environment.

Right now, the A4F team works with a variety of plants — from peaches and raspberries to hazelnuts and chestnuts. But Wolske said all these crops share a common theme:

“They’re natives, or they can be natives. The chestnuts have a high carbohydrate to them, which is pretty similar to what corn has, which is why corn is grown all over the place.”

Similarly, hazelnuts could serve as a substitute for the abundant soybean production in Illinois. They are high in oil, which is what makes soybeans so prized in production. Still, finding a balance between native and hybrid is something the team is working toward.

“Current natives, chestnuts, have a disease,” Wolske said. “The American chestnut doesn’t do too well. We have a lot of hybrids out there either with Chinese chestnut or the European chestnuts.

“The hazelnut, we have mostly native hazelnuts down there. But they’re not quite the quality that you might get from European hazelnuts. That’s your Nutella.”

Planting native species could be commercially successful and a more sustainable agriculture option. Wolske’s day-to-day projects vary just as greatly as the crops that agroforestry produces in the fields. And much like the crops, Wolske’s work changes with the season.

Starting in the early spring, pruning is the first task. 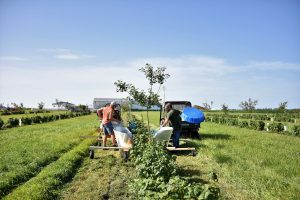 Wolske harvesting black currants with the Agroforestry team at the Illinois Energy Farm.

The perennial side of the A4F project is another factor that Wolske enjoys: “I don’t like planting stuff every year, so stuff you just plant and let it go and you take care of them after that is way more my style.”

This didn’t stop him from trying to plant his own home garden — though with all the work he does with the agroforestry project, he quickly found he just didn’t have the time for regular maintenance.

“I had two plots about 30×30 feet, and it slowly turned into a giant chunk of weeds,” he said. “I was growing mare’s tail, goldenrod, which ended up being a great pollinator strip.”

Now, Wolske helps to maintain other people’s gardens. Regularly, he will prune community gardens that have the crops he knows and loves — grapes — among others. Though now with his new pointer hound mix, Ponyo, Wolske has a great distraction from the daily work of his Ph.D. projects.

In the future, Wolske hopes to continue his work with perennials and polycultures. He enjoys the research side of the project, but there is still a lot outside of research that Wolske would like to pursue.

“Teaching would be nice. Or maybe having my own winery someday would be pretty cool, too,” he said.

In the meantime, he will continue his A4F work, watching the farm he helped plant on his first day on the job continue to grow and evolve.