Elijah Juma: More than a Gut Feeling on Mosquitoes and their Habitats 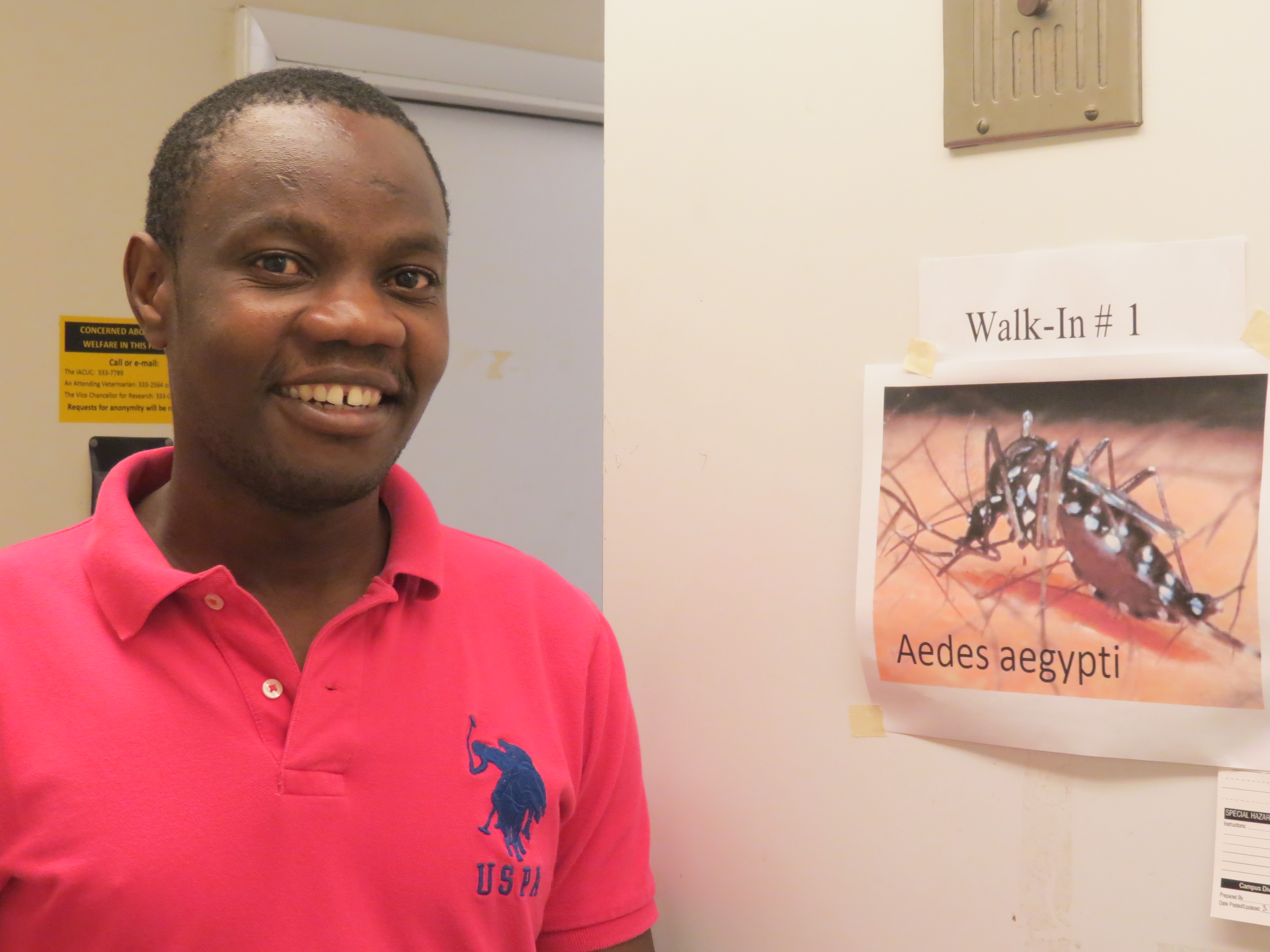 As part of the iSEE-funded Stormwater and Mosquito Control Project, Medical Entomology Ph.D. student Elijah Juma is examining how decaying leaves in stormwater affect the habitats — and the life cycles — of mosquitoes.

In Summer 2016, Elijah undertook his first field season under the direction of project PI Brian Allan, an Associate Professor of Entomology, and Juma Muturi, the Director of Medical Entomology at the Illinois Natural History Survey (INHS).

One goal of this expansive project is to offer solutions for controlling mosquito populations and resulting diseases such as malaria, dengue fever, yellow fever, West Nile Virus, and Zika, which are a threat to human health worldwide. This threat is in part due to mosquitoes’ tendency to lived and breed in human-made aquatic habitats formed by stormwater that has collected in discarded automobile tires, other debris, and urban drainage systems that carry water off of roads and sidewalks.

Elijah examines the role of leaf detritus in the habitats mosquitoes use for breeding. Decaying leaves that accumulate in stormwater attract a variety of microbial communities. These microbes — bacteria and viruses — aid the decay and act as a primary nutrient source for mosquito larvae, thus making collections of stormwater an attractive habitat and breeding ground for the insects.

Comparing the microbial composition in the aquatic habitat to that inside the mosquito gut allows Elijah to observe any significant changes or differences that take place between the external and internal environment of the mosquitos. His goal is to compare the changes of the gut community across different mosquito life stages (larvae, pupae, adult) and different habitats (tree holes and artificial containers like old tires).

Elijah collected larvae, pupae, and samples of water from two sets of storm drains near the Urbana-Champaign campus where the mosquitoes live and breed from May through August 2016. His samples of larvae and pupae were raised to adulthood at the Medical Entomology Field Lab, where a special environmental chamber mimics the local temperature, humidity, and cycle of night and day.

Once the mosquitos reach adulthood, their sex and species are determined and then they’re dissolved and centrifuged to extract and concentrate the gut microbes. Microbes were also collected and processed from the water samples for further analysis. These samples are used for Elijah’s research and for additional studies directed by INHS, a division of the Prairie Research Institute.

During his first season of collection, he learned some important lessons about field work with mosquitoes. 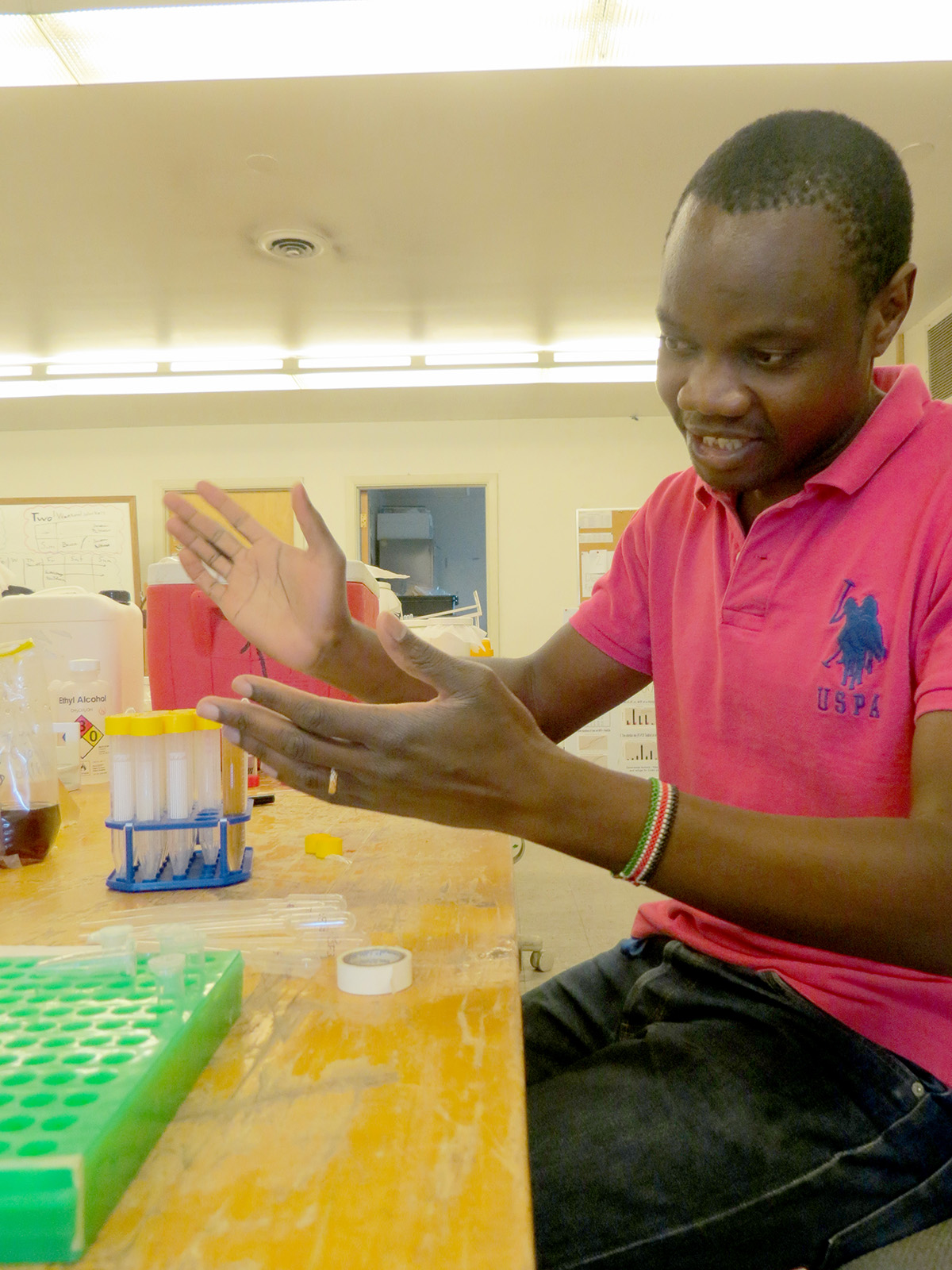 “Because of ecological dynamics, the species of mosquito I am targeting (Ochlerotatus triseriatus, carrier of La Crosse encephalitis virus, a neuroinvasive disease in the upper Midwestern U.S, Culex restuans and Culex pipiens, the primary carriers of West Nile Virus in the U.S., and Aedes japonicas, a possible carrier of these viruses) may not be present in the numbers I had hoped,” he said. “I realized that the numbers are not constantly high. You may find one species is present in relatively high numbers, while another target species is very low for that particular season. There are always changes in species evenness and richness.”

“Since mosquitoes have a generation time of at least seven days, it’s not advisable to sample more than once a week,” he said. “For the next planned field sampling, I intend to widen my sample to more natural habitats such as retention ponds and ditches, both to compare dynamics of mosquito gut microbial community composition between different habitat types and to get the required sample size.”

As he goes about collecting samples, he hopes that his analysis will give Stormwater and Mosquito Control project researchers more information about which plants a) leave behind litter that can affect mosquito production by influencing the chemistry of the aquatic habitats; and b) alter the abundance and composition of the microbial communities, which in themselves act as food for the growing larvae — and play a role in nutrient cycling through decomposition of the organic matter.

Elijah’s interest in mosquito research began while studying Biological Sciences and Parasitology at the University of Nairobi in Kenya, his home country. He plans to return when he completes his education in the United States.

“It would be a disservice to my motherland to become qualified here in the United States and not return home. There are many entomologists in America, and Africa needs more,” he said. “Mosquito research is very relevant to the (public health) situation in Africa.”

Back to the Stormwater and Mosquito Control Project page