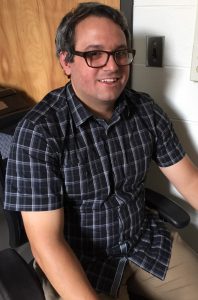 William Eddy is a post-doctoral associate and member of Professor Wendy Yang’s lab group in Plant Biology. He finished his Ph.D. in Ecology, Evolution, and Behavior from the University of Minnesota in May 2015.

As part of the Agroforestry for Food team, William is tasked with understanding the ecosystem services — the benefits to humans and the environment — provided by a mixed-species woody polyculture system in the Midwest. Several benefits have been predicted, including high food production, increased carbon storage capacity of the soil (called sequestration) and increased efficiency in soil nutrient use (leading to fewer pesticide applications and therefore less chemical runoff). He said these ecosystem services have been touted by many people based on common knowledge about how trees use resources, but it’s never been extensively tested on a full-scale site.

Using in-ground monitors and elemental analysis of soil samples, he’ll track the water, gas, and nutrients coming into and out of the test plot — and try to understand the way they do so.

“The nice thing about looking at mechanisms [for nutrient cycling] is once we understand that, then we can extrapolate better from our research to other regions and places, other systems,” he said.

In addition to his work directly with the woody polyculture research site, he will bring together farmers already practicing mixed-crop agriculture throughout the Midwest into a study network. From this group, he hopes to learn what ecosystem services different regions of the “corn belt,” with its wide variety of soil types and terrains, are capable of producing under woody polyculture systems. He is also eager to see the diverse ways farmers employ mixed species polyculture on their land.

“It is a necessary limitation of the experiment that we had to pick just a few species and plant them together in certain arrangements and a couple different densities. But farmers have chosen a whole different range of species planted together, and different arrangements, and they might just be planted based on what they think, on the recommendation of others, or on what they know grows together well and what doesn’t. We’re trying to harness some of that knowledge,” he said.

William grew up northern Ohio. He described his childhood self as the “outdoorsy type,” a kid who would play in the local cornfields, go on Boy Scout adventures, and generally loved being in nature. He credits his sixth-grade science teacher for turning his playtime passion in to an academic one. While he taught all the areas of science, this teacher was most passionate about biology — and shared with students his own hobby of studying salamanders in northern Ohio.

“He was the first one to really instill the importance of protecting the ecology of a region,” William said. “From there I always kind of knew I wanted to do something with ecology and with a specific focus on how we’re damaging ecosystems and what can be done to fix that or slow the damage or stop the damage.”

William earned a Bachelor’s degree in Biological Science from Baldwin-Wallace University in Ohio and a Master’s in Natural Resources and Environment from the University of Michigan.

In 2007, he moved to Minnesota to research the effects of a warming climate on forest ecosystems in that state. He enjoyed the work and the professor he worked alongside so much, he decided to go back to school for a Ph.D.

Although he’s worked more than 10 years with plant biology and ecosystem services, he’s never before worked on agriculture.

“It’s always been something I wanted to do, but didn’t really have the opportunity,” he said. “You know, agriculture is such a big user of fossil fuels and big exporter of greenhouse gases that it is tremendously important to understand that. That’s why I was drawn to [this project]: getting more on the ground and doing something with agriculture.”

About his motivation to work in sustainability, William said: “I think it is just tremendously important. Looking at the scope of what we are doing and how we are impacting the planet in both negative and positive ways — but it seems to be more negative now. It seems like the things I have studied could actually contribute even if it’s in a really small way to provide information or to guiding what the next step is to improve agriculture.

“Also, I have a young daughter now,” he added. “And it’s cliché, but I do think about her and how I really want to leave the planet better than it is now for her.”

He feels that his contribution to the larger body of scientific knowledge, while small in the grand scheme of things, is making a difference in the world:

“Just a little more knowledge on ecosystem services might foster greater adoption of woody polyculture, which could increase — even if its pretty slight — the water quality and carbon and biodiversity and other ecosystem services in the Midwest. For me, I’m part of a larger group, and I think that as a larger group of collaborators here and also across the Midwest, we could potentially have a much greater impact together.”