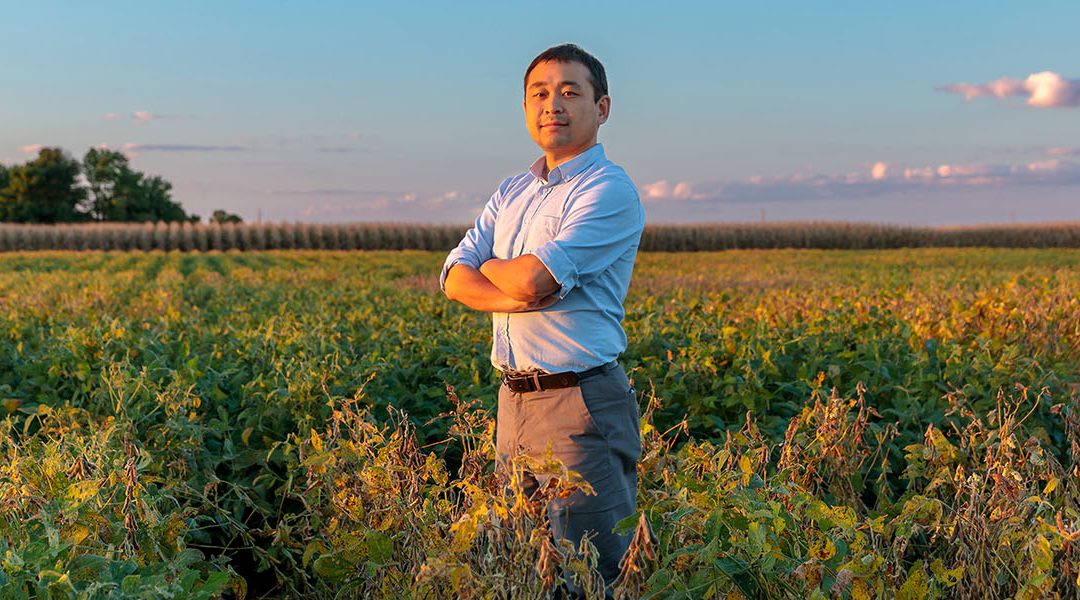 Urbana, Ill. — The U.S. Department of Energy has awarded a $3.3 million grant to a multidisciplinary research team at the University of Illinois at Urbana-Champaign to develop a precise system for measuring greenhouse gas emissions from commercial bioenergy crops grown in central Illinois.

Led by Kaiyu Guan, an Assistant Professor of Natural Resources and Environmental Sciences (NRES) and a Blue Waters Professor at the National Center for Supercomputing Applications (NCSA), the team will establish the Midwest Bioenergy Crop Landscape Laboratory (MBC-Lab) to monitor emissions on three 85-acre maize and soybean fields in Champaign County.

Corn and soybeans are the two major crops marketed to biofuel producers, with more than 75 percent grown in the Midwest. But current practices to grow those crops emit nitrous oxide (N2O), carbon dioxide (CO2), and methane (CH4) into the atmosphere — all greenhouse gases (GHG) associated with global warming. N2O, which also degrades the Earth’s ozone layer, is a product of excessive fertilizer use. And annual tilling aerates the soil, allowing microbes to break down carbon in the soil and release CO2 into the air.

Ethanol and other biofuels could meet up to 5 percent of U.S. energy demand with net-zero emissions, or even “carbon negativity” — sequestering more carbon in the soil than the production process emits. But that will require new farming practices that drive down emissions and improve yield, such as adopting no-till or cover crops to stabilize the soil or applying fertilizer at the right time and amount.

Through its Advanced Research Projects Agency-Energy (ARPA-E) program, DOE has funded a series of projects, including this one, to measure the impact of crop-management practices on yield and the environment — and to help create market incentives for efficient feedstock production.

“Down the road, the idea would be that we would apply these tools for real-world applications. Farmers would get a financial benefit from storing additional carbon in their soil or reducing nitrous oxide emissions — a service they would be providing to society,” said iSEE Baum Family Director Evan H. DeLucia, a co-investigator on the project. “If you incentivize farmers to do this, it’s good for the farmer, it’s good for the environment.”

Researchers don’t have the tools yet to quantify the emissions benefits farmers accrue, so this project would be a first step. The team will collect vast amounts of data from the three farms, including weather, such as temperature and wind speed; fertilizer use and tilling practices; GHG emissions; and remote sensing data from various platforms. Team members will also measure plant growth, soil moisture, and water quality under different growing systems. They will compare their findings to 10 years’ worth of similar data already collected at the U of I’s Energy Farm.

All of that will build a deep set of “real-time” data. The team will develop protocols for data processing and storage, create an online portal for growers and other researchers to access, and build the cyberinfrastructure for real-time data visualization. The researchers will also share findings regularly with the broader farmer communities in Illinois.

“We will provide the gold standard data,” Guan said.

Other scientists will be able to use the data to calibrate their instruments, and future projects could then develop easier-to-use instruments and techniques to measure how well farmers are reducing emissions.

“Illinois is among the most productive agricultural areas on the planet, with the typical U.S. Midwest climate and soil, and produces more than 30 million barrels of fuel ethanol,” Guan said. “Our newly proposed MBC-Lab is the perfect testbed for measuring emissions from biofuel production, and the platform we will develop will provide data and technology that can be applied to existing markets and broader production agriculture for ‘smart farming’ and environmental sustainability.”