EDITOR’S NOTE: This article was written in April 2020, and our campus has since installed Grind2Energy systems at all dining facilities. Check out the video above for the latest information as of Fall 2022!

As of Spring 2020, the University of Illinois at Urbana-Champaign educates 48,947 students. This means that 48,947 students are consuming food, and ultimately wasting some portion of that food.

So, where does the food waste go? For many students it will travel to a landfill; however, for those with a dining hall plan, their food waste will ultimately go through a system called Grind2Energy.

Grind2Energy is similar to the garbage disposal under the kitchen sink — but with a lot more power, said Doug Brokaw, Director of Sales for Food Services at InSinkErator.

“What we would see in a kitchen is usually a half horsepower to three-quarter horsepower. The Grind2Energy system is 10 horsepower, so it is about 20 times more powerful than what you see in a household setting,” Brokaw said. 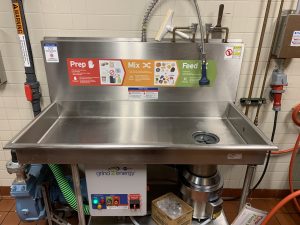 When dining hall workers collect all the food scraps, they move them to the grinder (above). As the food is ground, it is carried through a tube system and into a holding tank (pictured at top and below).

Once this food waste goes through the grinder, it becomes a “slurry.” The slurry is pumped into a holding tank right outside the dining hall, then gets picked up from the holding tank by a liquid vacuum truck and offloaded at the Urbana-Champaign Sanitary District, said Thurman Etchison, Assistant Director of Housing Dining Services for Equipment and Facilities.

“When the tank gets 80% full we get notified and the vendor who hauls the food waste gets notified,” Etchison said. “They come, they pump out the tank, and then they drop it off at the sanitary district, where they put it in their anaerobic digester. From there, they collect methane from it and they produce electricity to run their plant.”

Essentially, one can think of the system as a metaphor of the human body, Brokaw said.

“Take a look at the human body. If we look at the processing table we provide our customers, the grinder is the mouth, the pump is the throat, the holding tank at the University is the stomach and the digester (located off campus) is the intestinal tract — on a macro level,” he said.

Once the food slurry is put into the digester, which holds methanogens — microorganisms that eat food waste — the waste is digested and methane is generated as a byproduct. Eventually, the methane rises to the top of the tank and is sent to fuel a power generator, which produces electricity to run the plant. In some cases, if there is more energy produced than needed to run the plant, the surplus can be sold back to the electric grid. In some instances, the methane can also be compressed into natural gas to run vehicles.

The concept of turning food waste into energy is not new. Germany, which is half the size of Texas, has been using this method since the 1920s and has more than 10,000 digesters. In comparison, the United States has about 2,000, Brokaw said.

However, the University of Illinois wanted to use this technology to continue efforts to reduce its carbon footprint.

Etchison said the Grind2Energy system was implemented at the beginning of the 2019-20 school year. 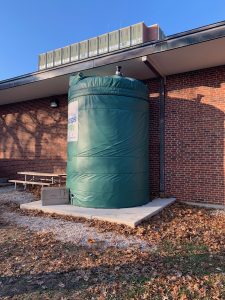 The holding tank for the slurry created by the grinder inside the dining hall. Once the tank hits capacity, the slurry is transported to the Urbana-Champaign Sanitary District.

“We just started implementing Grind2Energy at the beginning of the school year, and FAR was our first one. We had the system installed at ISR, and when the facility opens up in the fall it will be going there. We are in the process of trying to procure one for Ikenberry as well as LAR and PAR,” he said.

Because University-scale composting is not feasible and sending all the University’s food waste to the landfill generates so much methane, Grind2Energy is the best option for the dining halls, Etchison said.

Besides turning food waste into usable energy, another benefit of Grind2Energy is improving hygiene for the facilities using the system, “predominantly because Grind2Energy captures the material in a sealed holding tank, which contains the odors and prevents airborne insects and rodents from getting to the food waste inside,” Brokaw said. “Most of what goes into the system is not leftovers or table scraps. The majority of what gets put through the system is the rinds, the peels, and the trimmings from food preparation — the stuff you can’t donate or do anything positive with.”

Although the University cannot turn all of the food waste on campus into energy, the dining halls are a start. And, Etchison said, “Hopefully this small piece will be part of a bigger system down the road.”