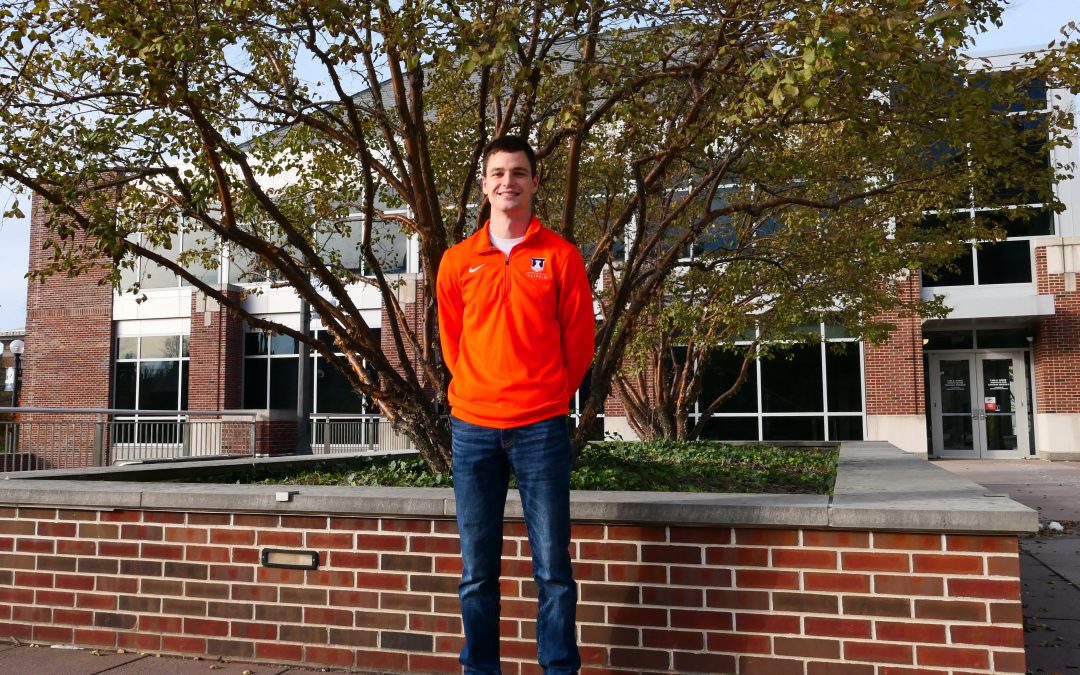 Commonly written off as mere nuisances, mosquitoes actually pose a significant threat to human health, as they are vectors for dangerous diseases such as Zika virus, West Nile virus, and malaria. According to National Geographic, mosquito-borne diseases are responsible for millions of deaths worldwide each year.

A creature that plays such a crucial role in disease ecology across the globe is a prime candidate for research. Cameron Schwing, a dual master’s student in Biology and Education at the University of Illinois at Urbana-Champaign, studies mosquitoes and their ecological interactions with other species as a member of iSEE’s Stormwater and Mosquito Control project.

Schwing grew up in the small town of Fisher, Ill., not far from Urbana-Champaign. His interest in biology took off during his high school days. 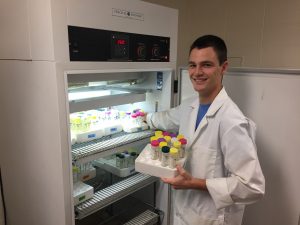 “I had an amazing biology teacher,” Schwing said. “He was involved with research here at the University, so he would take students on little field excursions, like going out and collecting bees. We’d head out, and he’d teach us about the different plants and animals that were there.”

Schwing began his undergraduate journey at Parkland College, and later transferred to the U of I as an Integrative Biology (IB) major.

With a budding interest in research, Schwing joined the lab of Professor Carla Cáceres — disease ecology lab with a focus on stormwater habitats. At first, Schwing supported his lab mates’ projects through tasks like analyzing the variety and density of organisms present in pond water samples.

Schwing soon started devising an independent research project of his own. Upon graduation, Schwing earned High Distinction for his research. The following semester, as he began his journey as a master’s student, he set out to expand on his senior thesis by considering new factors and taking different approaches. Schwing provided an explanation of his project:

“It’s a competition experiment with mosquitoes and one of their common competitors, simocephalus. I set up treatments with different densities of mosquitoes and their competitors, and I am looking at how the mosquitoes’ microbiome changed in response. This is important because microbiomes are increasingly tied to the mosquitoes’ fitness during development. Then I ran another trial where I let them grow to adulthood and I measured their wing lengths, which are a very strong indicator of body size and a proxy for their fitness.” 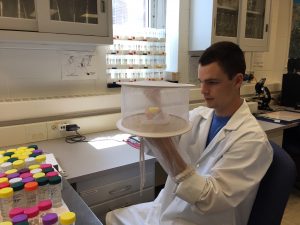 Sorting through all the data he’s collected is no easy chore. Luckily, the lab has a collaborator at the U.S. Department of Agriculture (USDA) who has been extremely helpful with sequencing the DNA extracted for microbiome samples and analyzing the sequences. In addition, Schwing is incredibly grateful for the guidance he has received from Cáceres throughout the entire process.

“The next big step I’m working on,” he said, “is trying to figure out if and how the microbiome samples from the mosquitoes and environments differ within and between each other when comparing food type, competition type, and density of the organisms. And when I say ‘differ,’ I’m looking at things like the diversity of microbes and abundance of core taxa. We don’t know the full story yet, but it’s looking like we might have a fairly good one to tell after all of the data are analyzed!”

Mosquitoes are arguably the deadliest creature on the planet because of how many diseases they vector. Determining how they develop, what factors affect their fitness, and what factors affect where they can live is valuable in combating mosquito-borne diseases. If certain competition might decrease mosquito fitness, perhaps that can help keep mosquito populations under control.

In addition to his work in the lab, Schwing is a Teaching Assistant for IB 150: Organismal and Evolutionary Biology. His passion for biology has extended into a passion for teaching biology.

“There’s a lot of traditional teaching where a teacher or professor just stands up and gives a lecture, and students take notes, and then students take a test. We’re really being pushed for more student-driven learning, which requires active engagement with the class material,” he said.

Schwing believes in encouraging active learning through a faciliatory approach in the classroom. The instructor for IB 150, Ben Clegg, typically opens the class by introducing a biological phenomenon and tasking students with investigating it. In this situation, TAs like Schwing walk around during group work to act as facilitators who guide students in the right direction.

“Being able to mix some of the roles that Ben and the TAs play is something I have been able to do more of during some of my high school student teaching experiences, and definitely something I look forward to doing as a full-time teacher in the near future,” he said.

“It’s really cool to see the students collaborating. Science is a very collaborative field, and getting those skills is extremely important. You can’t gain collaborative skills by just sitting and listening to someone lecture.”

After he graduates, he plans to start teaching. If he’s still in the Urbana-Champaign area, he hopes to maintain his connections at the University and use those connections to enrich the high school classes he’ll teach.

“I really believe that you learn best by doing. Instead of just teaching in the classroom, if I could have the students involved with experiments out in the field, I think it would be more engaging and they’d have more fun,” Schwing said.

Ultimately, it’s all about passion. Schwing hopes to continue learning more about the grand ecological systems people inhabit, and even more so, he wants to share that passion with others.

“I know my teacher changed my life, and I like to think that hopefully that would happen for at least one of my students.”

Back to the Stormwater and Mosquito Control Project page