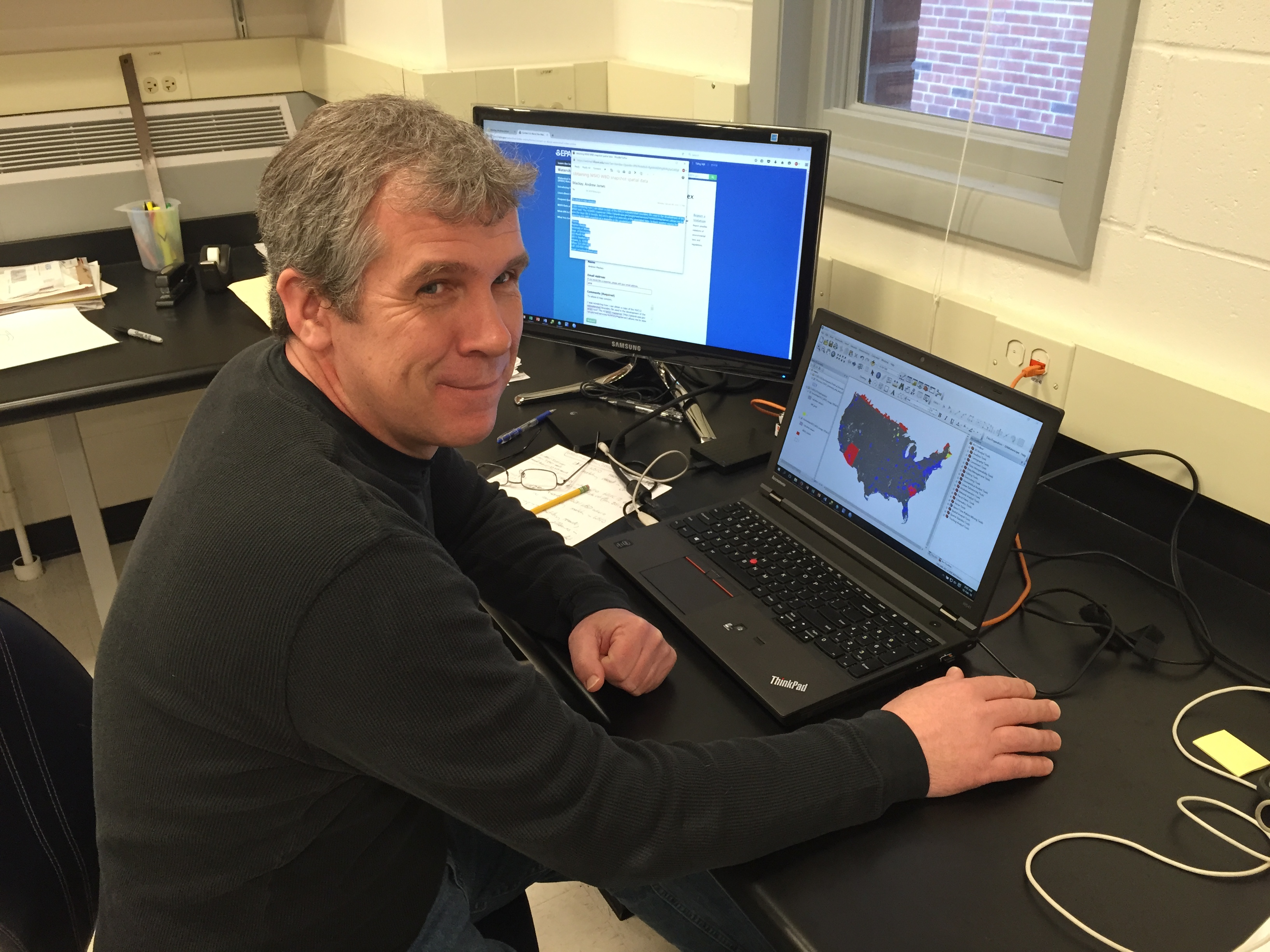 Andrew Mackay is a Postdoctoral Research Associate in the Department of Entomology with a broad interest in arthropods and public health. He joined Associate Professor Brian Allan’s lab in 2012, just as Allan was starting to turn his mind toward human-made stormwater infrastructure and how it interacts with disease-carrying insects.

The traditional storm drain that carries rainwater away from urban streets allows some water to pool at the bottom of the catch basin — prime territory for mosquito reproduction. Mosquitoes lay their eggs in the stagnant water, and the larvae that hatch eat the microorganisms that grows on the litter in the water. New designs for stormwater management — dubbed “green infrastructure” for their goal of a more natural water ecosystem — have the potential to reduce the water sitting around for mosquitoes to breed in.

“I don’t know that anyone else was really looking at this in any kind of mechanistic way,” he said. “We developed some working hypotheses, the main one being that the net effect of putting more of this green infrastructure in will be a reduction in the quantity or quality of aquatic habitats available for mosquitoes. And we think that will have a net positive impact on public health.”

The perfect opportunity for team members to test their ideas came in 2012, when the City of Aurora began plans to install green stormwater infrastructure in several of its municipal districts. One of the projects was to install catch basins with a new design, he said.

A stormwater catch basin is the mouth of the storm sewer system. Beneath the metal grates that line most city streets is a concrete chamber that collects rainwater water and lets the trash and other debris swept down the drain settle out before the water heads through the pipeline toward a river or other natural water body.

The traditional (sometimes called “grey”) stormwater catch basin design is completely enclosed; no water escapes into the ground. The green design used by Aurora placed the basin over a bed of gravel. Holes were drilled in the floor to allow water to constantly flow into the ground, shrinking or eliminating the pools in which mosquitoes can lay their eggs.

For four years covering time before, during, and after Aurora’s stormwater system overhaul, Andrew led teams of students in field work to sample the water in traditional and green stormwater systems in Aurora and to trap adult mosquitoes in the area. They finished their field work in summer 2015. Now, in the lab, Andrew and what he called a “small army” of undergraduate students count the number of mosquito larvae in the preserved water samples and from that count, draw up a table of mosquito population over time.

“Preliminary data seems to support the hypotheses… We seem to see at least a modest effect on mosquito abundance,” he said.

Mackay blames serendipity for his discovery of medical entomology — the study of the bugs that makes humans sick.

“I had a broad interest in biology in high school. Then, I got my first student position working in a lab with mosquitoes. I had a fantastic mentor, Reinhart Brust — a graduate of the University of Illinois, in fact — and the research was really interesting; that really drew me in,” he said.

In 2008, he took a position with the Center for Disease Control’s Dengue Branch in San Juan, Puerto Rico, researching outbreaks of that disease. While the medical professionals treated those infected, Andrew would trace the largest sources of the disease-transmitting mosquitoes and work to bring their populations down to reduce human contact and spread of the disease.

“I remember one occasion when we were sent to the Marshall Islands when they had a large outbreak of dengue. It was both one of the most stressful experiences I’ve had and also very rewarding because I felt that we were actually making a substantive contribution to the public health response,” he said. “It was a very enriching experience and very interesting experience to see this disease cycle in a very different setting.”

Going forward, he anticipates future conversations about the applications of green infrastructure in improving public and environmental health.

“Perhaps we can identify issues from the other side to form organized mosquito control programs — ways in which they may need to change their practices to adapt in changes in how stormwater management is practiced,” he said. “If you put in infrastructure that has less capacity to produce mosquitoes, that may reduce the need for chemical control, and it may provide long-term control of these mosquitoes by simply reducing the presence of standing water.

“I think there’s a large interest and commitment in both public and private entities for adopting these methods. I think the relevance of green infrastructure to mosquito production will be significant in the future.”

Return to the Stormwater and Mosquito Control project page