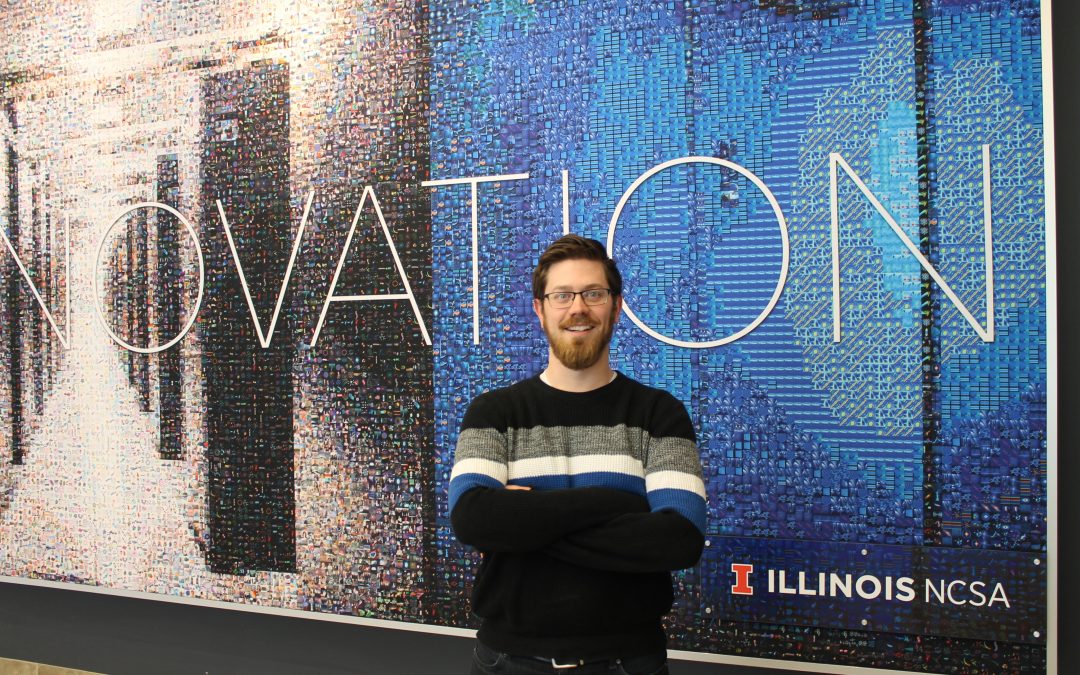 AJ Christensen has always wanted to use his computer science and graphic design talents in service of a worthy cause. Now, as a programmer in Illinois’ Advanced Visualization Lab (AVL) and a member of the Crops in silico research team, his visualizations appear on screens big and small to educate, entertain, and empower audiences around the world.

From the moment Christensen first set foot on campus as an undergrad, he felt at home at the University of Illinois and in the Champaign-Urbana community. Originally, Christensen aimed to leverage his B.S. in Computer Science (CS) toward a career in character animation.

“When I was an undergraduate, my goal was to work for Pixar, but I think at the time I didn’t realize that there wasn’t a very clear path between CS and character animation,” he said.

Christensen’s interest in filmmaking led to a semester abroad at Griffith Film School in Australia, a unique experience — albeit atypical for a CS major — which added to his “whole weird mishmash of a background.”

The character animation path might not have been in the cards for Christensen, but it nonetheless opened doors into his chosen field. A collaborative animation project with Donna Cox at the National Center for Supercomputing Applications led to his role in the AVL, which he began upon graduating. 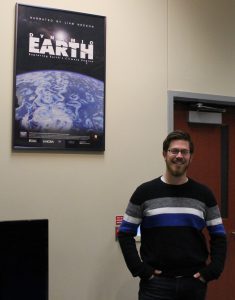 Christensen in front of a project poster.

“I was exposed to what scientific visualization was — how it leveraged my animation skills but was more relevant to a CS background,” he said. “Joining the AVL team was a dream combination of my science background, programming background, and interest in movie-making.”

At the AVL, Christensen uses supercomputer-generated data to develop visuals — mostly 3D computer graphics — that appear in media like TV shows, planetarium dome presentations, and Hollywood films. In 2014, he took a leave of absence to work on a particularly high-profile film: Interstellar. Christensen’s role with London-based studio Double Negative involved working with a team to design the visualization for the film’s trademark black hole scene.

“It was useful to see the ways in which the scientific and visual effects communities feed off of each other. Science can’t be done without storytelling, and the techniques that storytellers use are heavily based on what’s been developed in scientific communities,” Christensen said.

Now approaching his 10th year with the AVL, Christensen’s favorite project with the team will always be his first film: Hubble 3D. This IMAX movie about the Hubble telescope provided opportunities for Christensen’s team to mingle with astronauts, scientists, and film gurus alike.

“The rest of the team might say it was more exhausting than exciting, but for me, coming out of school and used to working all night long, it was thrilling to be working on a real Hollywood production,” he said.

Silver screen projects aside, Christensen loves that his role in the AVL’s “Renaissance team” is an education-focused environment that encourages him to try on as many scientific and artistic hats as he wants. This often involves returning to his character animation roots.

Another of Christensen’s favorite NCSA projects is his partnership with the Crops in silico (Cis) program, initially seed-funded by the Institute for Sustainability, Energy, and Environment (iSEE). The initiative, literally named “Crops in computers,” is revolutionizing agricultural sustainability by augmenting field trials with virtual crop experimentation. As a visualization programmer on the Cis team, Christensen is responsible for crafting digital models of real crops.

“Crops in silico has been an exciting opportunity to explore visualization from another perspective. We’ve gotten experience with simulations of astronomy, geology, and biology, but crop science is a completely different animal. This could be — and has been — groundbreaking. It’s totally new, totally unseen. And it’s exciting to be there at the beginning,” he said.

Recently, Christensen collaborated with a crop scientist to simulate soybeans for a research project about photosynthesis. After a crop of soybeans was cultivated and the measurements were recorded, Christensen leveraged the collected data to generate hundreds of true-to-life virtual versions of the plants. The computer-generated crops could then be exposed to simulated sunlight, with the observations accurately reflecting what would happen if those plants were grown in the field. 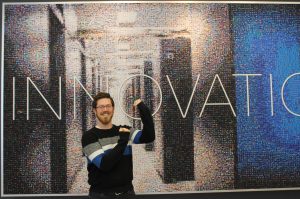 Experiments executed in silico not only occur at an accelerated pace, but can be manipulated to reflect future scenarios as well as current conditions. Barring the invention of a time machine, this is an invaluable and never-before-seen capability.

“We’re experimenting with digital crops quickly so that we can understand how crops might grow in future climates, including climates that don’t exist on the planet right now. When those climates begin to affect life on Earth, we will have knowledge that will contribute to the quality of food that we need,” he said.

Working on the Cis team not only engages Christensen’s passion for programming, but his love for public service as well. Specifically: science communication, educational outreach, and informing the public about complex topics with compassion and empathy.

While Christensen’s goal is to communicate science to the general public, Crops in silico has also affected his own personal outlook on what it means to be a positive change-maker:

“One of the reasons I’m excited about Cis is the reason that everyone should be excited about it. This is an opportunity to do something that does make a difference, and it’s an optimistic view on how to handle climate change, so I’m empowered by that.”

When asked about the message he hopes to convey with his visualizations — whether they pertain to the solar system, sustainability, or anything in between — Christensen answers:

“It’s not all doom and gloom. There is a future, but we have to work for it.”