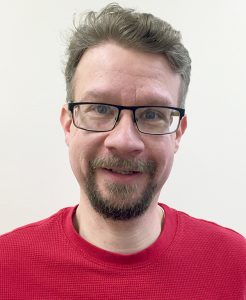 Tony Mancuso is iSEE’s Communications and Public Affairs Coordinator. Before joining the Institute in March 2014, he was the Features, Entertainment, Design, and Sunday Editor at The News-Gazette newspaper, where he worked for 17 years.

“Working at iSEE was really appealing to me because I had a background in science — a B.S degree in Chemistry from Southern Illinois University at Carbondale — that I hadn’t gotten to use much,” says Tony, who also earned a B.S. in Journalism at SIUC. “I wanted to do some science writing again. I also think that it’s very clear that the climate has changed and that the problems are man-made. We need to change our approach toward the environment, and I am eager to get the word out about that.”

Tony’s primary role at iSEE is “getting the word out.” He works to engage students, staff, faculty, visiting scholars, community members, and members of the world sustainability community in the initiatives iSEE is taking to generate real-world solutions to pressing environmental problems. He looks forward to watching all areas of the Institute grow to reach more people, and is eager to increase the number of people looking to Illinois as a role model of sustainable practice and research.

Since starting at iSEE, Tony has been most impressed by the number of entities on campus that already include sustainability in their operating and teaching goals. Uniting these groups under the vision of the Institute, he believes, is key to creating some real-world solutions.

Tony lives in Urbana with his wife and two children. The former president of the Urbana Little League, he founded the Urbana United Soccer Club, which he runs along with the Urbana Teen Baseball Program (American Legion Post 71). He still coaches his son’s youth soccer and baseball teams. His other hobbies include reading, rooting for the St. Louis Cardinals and following Illini sports.