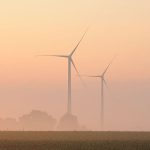 Starting this semester, when you flip on the lights in a building at the University of Illinois at Urbana-Champaign, your action will lead to fewer campus greenhouse gas emissions because of a big change in energy procurement strategy at Illinois.

“Lowering emissions from energy use is a monumental piece of the iCAP and its stated goal for campus to be carbon neutral by 2050, and I am proud to see Facilities & Services taking the steps needed to make it happen,” said Evan H. DeLucia, Director of the Institute for Sustainability, Energy, and Environment (iSEE). “Energy purchasing is a big-ticket item — something we don’t take lightly because it has to be reliable and affordable to support the campus education and research missions.”

The iCAP — campus’ roadmap to a net zero emissions future — includes an objective to increase purchasing of clean energy to 120,000 MWh per year by 2020. The new PPA, which increases campus energy purchasing to more than one-fourth of that objective, is a “cornerstone to build on,” DeLucia said.

“We were all really excited by the solar farm, but this is even bigger — three times the amount of energy!” he said. “And this approach holds more possibility for growth: We have to buy some of our electricity from somebody, so we can start making sure more and more energy is bought from clean sources.”

iSEE officials were especially pleased with the wind PPA because it was one of the first recommendations that came from a formal campus sustainability process the Chancellor approved in June 2014. iSEE created six thematic Sustainability Working Advisory Teams (SWATeams) made up of students, staff, and faculty to examine campus operations and submit recommendations for action to higher campus administration.

Just one month later, in July 2014, campus and F&S administrators had on their desks the Energy Generation, Purchasing, and Distribution (EGEN) SWATeam’s recommendation that campus “pursue Power Purchase Agreements with one or more Wind Farms as soon as possible” to reduce campus’ reliance on fossil fuel-derived energy.

Campus was already considering a wind PPA, but “we did not appreciate at the time how nuanced the PPA would be,” said Physics Professor Scott Willenbrock, the new Provost Fellow for Sustainability and former chair of the EGEN SWATeam that made the formal recommendation. “Many people worked hard to make this a reality.”

Said DeLucia: “It’s so important to have these direct lines of communication and evaluation open to facilitate progress like this. The SWATeam members are volunteers who are willing to put pressure on campus to act, and to help do some of the legwork to make things happen — that’s why they’re so valuable.”

More details about the 10-year power purchase agreement are available in the F&S news release.

To learn more about the University of Illinois’ commitments to clean energy — including a campus goal of carbon neutrality by 2050, if not sooner — visit the iCAP page on our website.