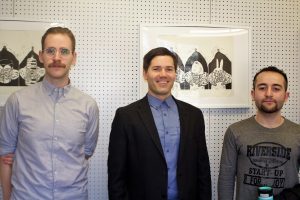 Sawdust flies through the air as students quickly finish up class projects. As the day calms and the students leave, the sawdust settles near the ground. Just another day in the life of an architecture workshop and many fab-labs across campus. All the sawdust, considered waste, is collected and dumped.

But what if the sawdust could be reused for something more sustainable? At the University of Illinois at Urbana-Champaign, researchers are trying to accomplish just that.

Assistant Professor of Architecture Aaron Brakke and Architecture Master’s Candidates Colter Wehmeier and Shaahin Davami take leftover sawdust from building workshops and turn it into 3D models to make sustainable materials that could be used in future projects.

Brakke said as an architect, he wants to explore different areas of sustainability when it comes to materials within his profession.

“We know we contribute greatly to carbon dioxide (CO2) emissions, and use quite a bit of energy, and so as architects we want to be responsible custodians of the natural environment and we want look for ways that we can mitigate the damage that traditionally the building industry has accounted for,” Brakke said.

A part of this energy consumption and CO2 emissions comes from the architecture workshop, where Brakke and his team are collecting the sawdust from scrap materials of wood timbers, lumber, and plywood sheetings. Each fab-lab creates at least 40 pounds of leftover sawdust per semester. 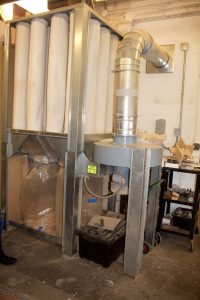 The machine that collects the sawdust. It is swept under and into a vacuum and sent through a vent system. It is then collected in the clear bag and dumped for waste.

After previous successful work with Illinois’ Student Sustainability Committee (SSC), Brakke and his students decided to apply for funding.

“We started to look for things over the past year or two and saw this opportunity to apply for funding and thought this could help actually get the equipment we needed to do some prototyping,” he said.

The researchers are in the early stages of this project and are waiting on equipment.

“We have identified the material; we have seen the waste,” Brakke said. “Now we are looking at what we can actually do with this.”

Along with making a more environmentally friendly material, another purpose of this project is to turn sawdust into a viable product in their industry.

“One of our goals is to look for translation into the architectural and building industry, but also the other narrative here is sustainability and this is a really important aspect of the project,” Brakke said.

Although in its early stages, the implications of this project could have a lasting impact on green efforts within the architectural industry.

“You see right now in architecture we are very limited by the materials we have, so right now we are limited to flat sheets,” Brakke said. “With printing we could start to look at other forms that have other shapes.” 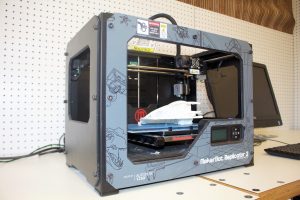 There could also be potential for different design features when constructing with these materials, according to Wehmeier.

“For instance you could print patterns, think of like a relief pattern on a flat surface, that creates different thermal properties, it could change the acoustics of a room. It could even change the way that light hits it,” Wehmeier said, “Those are possibilities on the architectural scale for better performance through non-flat materials.”

A potential byproduct of this work could help make 3D printing cheaper for students. Davami said 3D printing can be expensive — switching to more natural materials might decrease that cost.

“It will be very helpful for the campus to have more sustainable 3D printing facilities because right now with the materials we have it is not cheap to 3D print,  but if we were to have some materials that we can reuse, it would be so much cheaper and more available for the students,” he said.

Because these results can affect students and the general population, Brakke and his team would like to hold workshops for the community later in the process.

“What excites me the most is we go through this process of making a viable or semi-viable product, to make the material and then produce things like objects, models, and things like that. We want to give people in an exhibition setting a chance to touch and interact with the objects and see there qualities,” Wehmeier said.

Brakke said another important aspect is engaging the community in the process.

“Part of the power of this project is trying to build bridges with not only students here on campus, but also the community that lives off campus, the local citizens,” he said.