Styrecycle: A New Effort to Reduce Waste on the Illinois Campus

APRIL 19, 2016 — Expanded polystyrene — more commonly known by its brand name “Styrofoam” — is everywhere. It makes up your disposable coffee cup, the packing peanuts in that care package from your mom, and the insulation in your apartment’s walls. At the University of Illinois, countless bottles of chemicals, biology specimens, and fragile parts of lab equipment arrive in packaging made of Styrofoam every day, and, sadly, almost all of it gets tossed in the trash.

Styrecycle, a new iSEE-supported and student-pioneered specialty recycling program on campus, was created to cut down the volume of Styrofoam headed to the landfill.

Styrofoam is notoriously hard to recycle — not because it is difficult to process into new products, but because Styrofoam is designed to weigh next-to-nothing. This is great when you want to protect items without increasing shipping costs, but economically upside-down when the Styrofoam itself is the material being shipped. With a large volume and low density, a semi-load of Styrofoam fetches a low price — often less than the cost for the fuel and driver’s pay.

The solution, then, is to get more of the commodity into the truck to make the trip more profitable.

In 2015, a joint team from iSEE and the Illinois Sustainable Technology Center (ISTC, a division of the Prairie Research Institute) applied for and was awarded a grant from the Student Sustainability Committee (SSC) to buy a Styrofoam densifier. This machine grinds up the plastic collected from campus into small beads and extrudes it in a very dense tube that looks a lot like a giant squirt of toothpaste. Local recycling company Community Resource, Inc. (CRI) in Urbana houses and operates for free the University-owned densifier in exchange for the proceeds from the sale of densified Styrofoam. CRI owner Matthew Snyder doesn’t expect to make a profit, but he says he’s dedicated to doing the right thing for the community.

“If it turns out that it’s not economically ideal, it’s not going to harm anyone,” he said. “I started out recycling as an environmentalist, and it turned me into a business guy. (I’m motivated) by a possible environmental benefit, a possible economic benefit, and frankly some curiosity about how it will work out.”

With the end steps in place, campus  just had to get Styrofoam from its lab buildings to CRI. iSEE entrusted the development of a business model to four student interns: Christy Panganiban, a senior in Environmental Engineering; Marco Tjioe, a graduate student in Biophysics; Aaron Gatdula, a sophomore in Natural Resources and Environmental Sciences; and Chelsea Peterson, a freshman in Agricultural and Biological Engineering. Together, they recruited Styrecycle’s first participants, Loomis Laboratory of Physics and Edward R. Madigan Laboratory, and provided each building with a 4-foot square metal wire collection bin and signage on what can and cannot be recycled.

When the bins are full, one of the Styrecycle student interns transports the load on a miniature flat bed trailer attached to a bicycle to a holding point at the National Soybean Research Center (NSRC) — where the iSEE office is located. Once a large enough volume of Styrofoam has been amassed there, CRI will send over a truck and take it back to their plant to be processed.

The test-case operations in Loomis and Madigan Lab were resounding successes. Jerry Cook, facilities manager at Loomis, said he started receiving emails in just two days from researchers applauding the new recycling option and asking if they could bring in their Styrofoam from home to recycle. 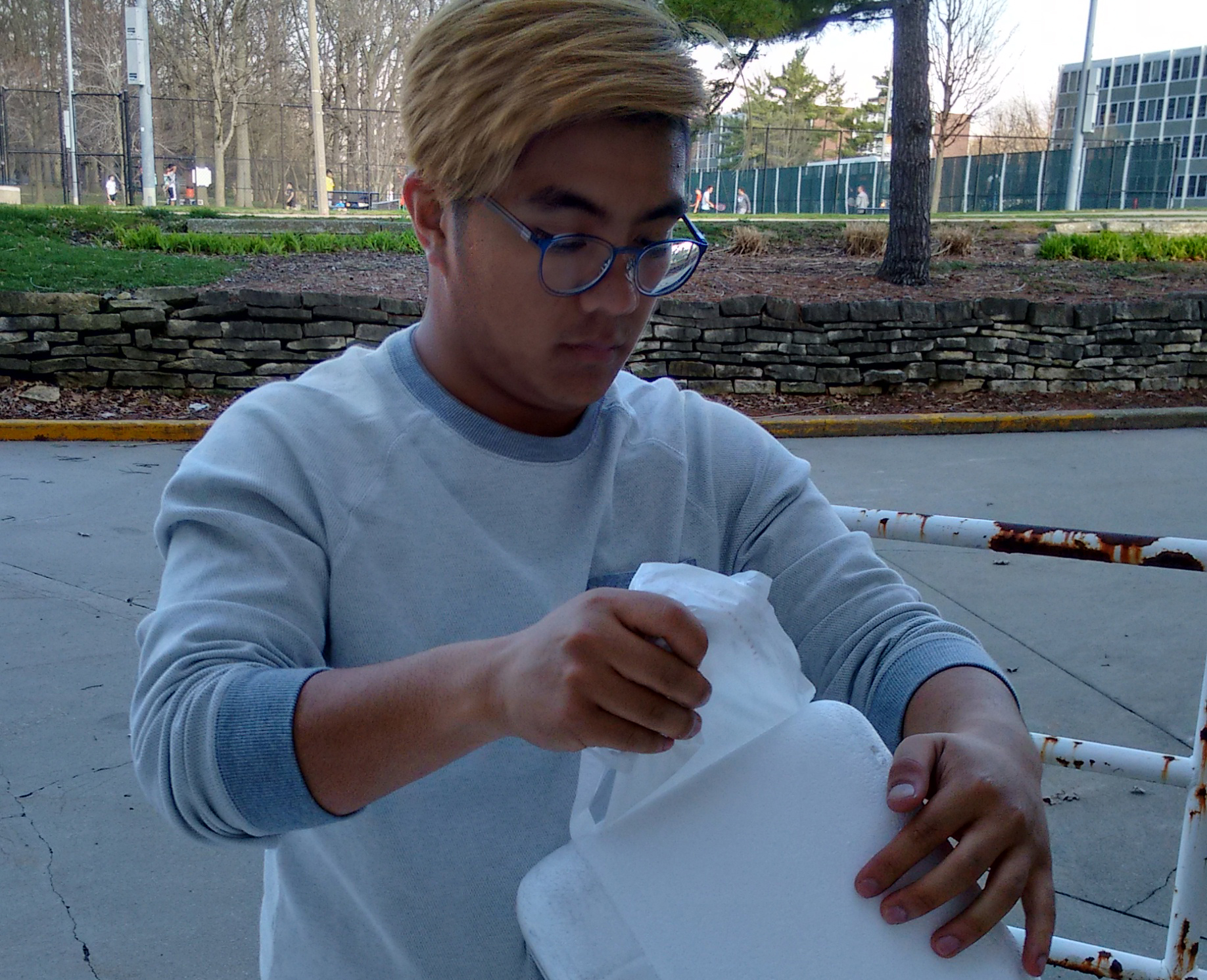 Aaron Gatdula peels a plastic label from a Styrofoam cooler during Styrecycle’s delivery on March 31, 2016. Stickers, tape, and labels “gum up the works” of the Styrofoam densifier at CRI and must be removed ahead of time.

Meanwhile at Madigan Lab, facilities manager Darren Gentzler said janitorial staff members have shown they’re really on board by fishing Styrofoam out of the trash and taking it to the recycling bin there. He expects further behavior improvements as word gets around the building about the new procedure.

“We only have one Earth, and we have to take care of it,” Cook said. “We are a research institution, and we have the opportunity to show people how it’s done correctly — and show them the minimal amount of resources you can do it with. This process can get shared through other communities.”

“It’s not going to cut in half the material we send to landfill; the bigger impact of this type of program is really in what it says about our campus, and what it says to our student body and the people who work here about the ethos of sustainability,” he said. “We are really trying everything that we can to reduce our impact on the environment. This may be a small step, but it’s a step that we can take as a campus right now.”

Besides Loomis, Madigan, and NSRC, bins are also located at ISTC, the Carl R. Woese Institute for Genomic Biology, and the Architecture Annex. More are expected to be added in Fall 2016. To request a Styrofoam recycling bin in your building, email the Styrecycle team at illinois.styrecycle@gmail.com. The students will work with your lab or building manager to find a central collection space.

— Co-reported by iSEE and The Green Observer Magazine; co-written by Olivia Harris and Elise Snyder