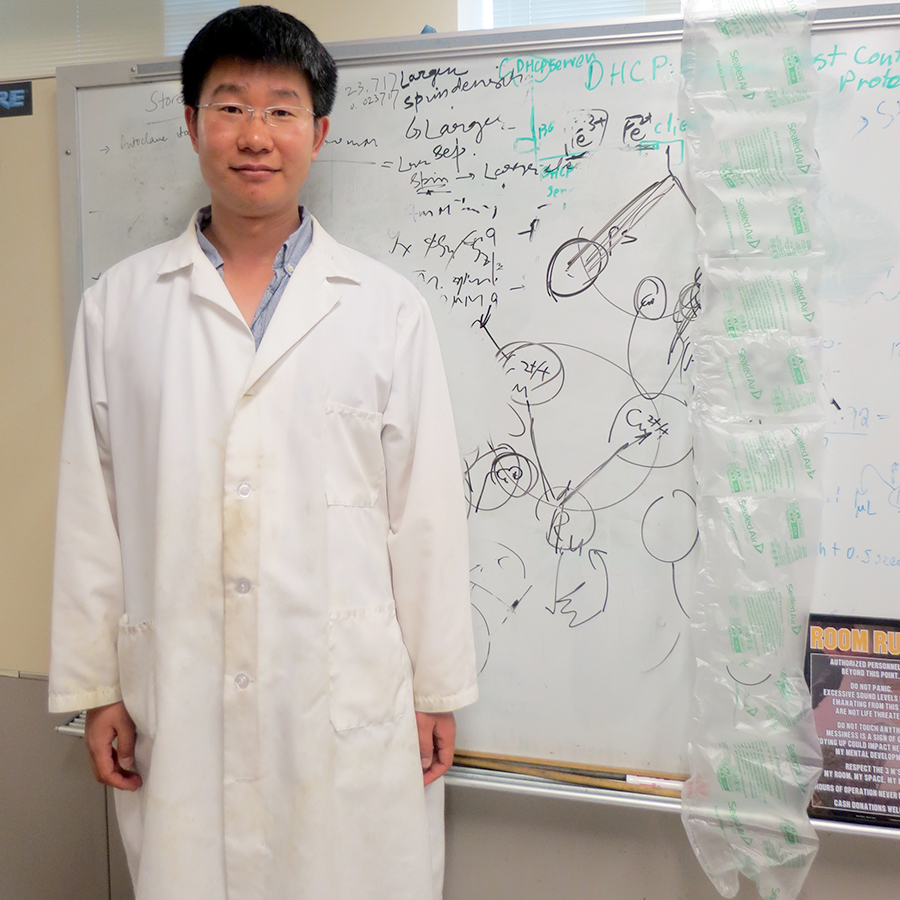 “We may know that something works, but that does not mean we know how it works!”

Meet Shiliang Tian, a new doctoral graduate in Chemistry at the University of Illinois at Urbana-Champaign.

Shiliang obtained his Ph.D. under Chemistry Professor Yi Lu and worked for about two years on the Smart Water Disinfection Project as one of his many research tasks. Until recently, he was the only chemistry student working on the iSEE-funded project, which seeks to identify and eliminate pathogens in drinking water that account for more than 1.8 million deaths and 870 million cases of malnutrition annually worldwide.

Shiliang concentrates on figuring out how elemental, or “free,” chlorine kills viruses and bacteria.

“Human adenovirus, for example, can be found in drinking water all over the globe, and it is not just a problem when ingested,” he said. “Infection can spread through showering and swimming, too. Chlorine is a very effective disinfectant, but we do not know why.”

Adenoviruses can cause a variety of adverse health effects including gastroenteritis, respiratory disease and conjunctivitis. Adenovirus gastroenteritis can eventually lead to death by dehydration in people who have limited access to safe drinking water, especially infants, young children and disabled and elderly people in developing countries. Because of its prevalence and health impacts, the U.S. Environmental Protection Agency has included human adenovirus on the drinking water Contaminant Candidate List for potential future regulation.

Shiliang is interested in protein chemistry, and his research centers on finding out exactly what happens to the various types of proteins within virus and bacteria cells when chlorine disinfection — the current best water decontamination practice for developing nations — damages them.

“It is clear that adenovirus inactivated up to 99.99% by free chlorine could still attach to the host cells, and early and late mRNA transcription and genome replication was inhibited,” he said. “A former collaborator (and fellow Smart Water Disinfection Project alum) Aimee (Gall) Moor worked on that. However, we have not observed adenovirus genome damage by free chlorine. Thus, free chlorine is most likely targeting proteins in the virus, which leads to viral entry inhibition.” 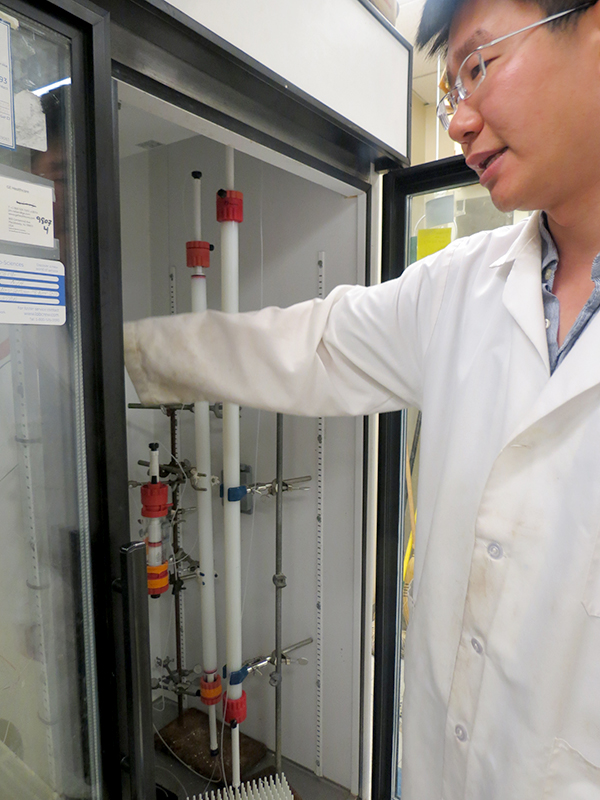 In the lab, Shiliang can produce and isolate recombinant human adenovirus major capsid proteins from E. coli. After enzymatically digesting the chlorine-treated proteins into peptides, he can identify the modifications on each peptide using a physical separation technique called liquid chromatography-mass spectrometry, or HPLC-MS. This process allows the protein to be sequenced so that the parts altered by the chlorine can be located and characterized, bringing the group one step closer to unlocking the mechanism responsible for disinfection.

“One of next steps is to try to determine which modifications may play a role in inhibition of viral entry, leading to adenovirus inactivation by free chlorine,” Shiliang said. “It is very, very hard to figure out what exactly happens.”

All three major capsid proteins are modified by free chlorine treatment, he said, and these modifications may inhibit replication cycle steps such as binding affinity or disassembly. To get technical: Several modified methionine and tyrosine residues are within the hydrophobic core and peripheral hydrophobic patches of the fiber shaft, which may disrupt the fiber structure and affect downstream events like penton base binding to integrins.

Shiliang has spent most of spring and summer 2016 wrapping up his research and writing journal articles. He will soon move on to a postdoc position at Stanford University, where he will continue similar work.

Originally from China, he wishes to stay in the in the United States and land a faculty position in academia to help support his wife, an aspiring researcher who is also from China, and his son, who was born here in the U.S. He said he is grateful for the practical knowledge he obtained at Illinois and while working on an iSEE project, and he looks forward exploring more theoretical-type research in the future.

Back to the Smart Water Disinfection project page