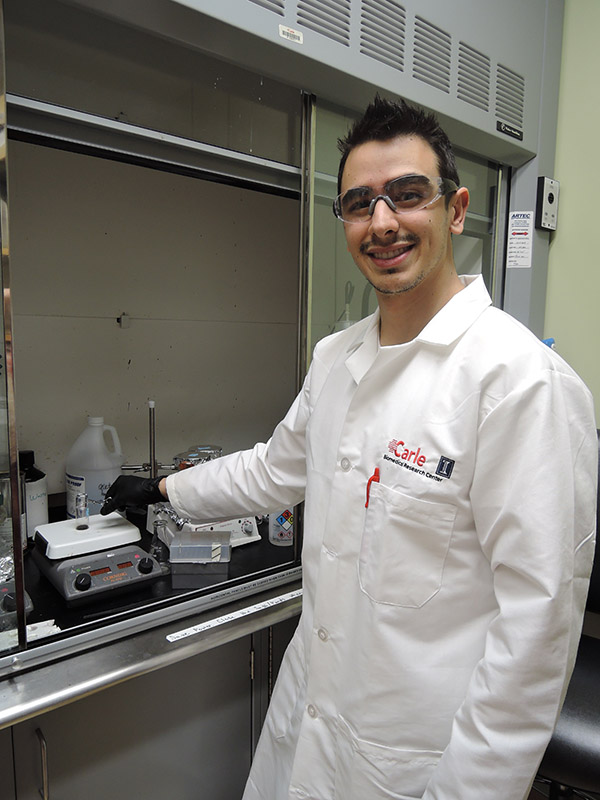 As a Ph.D. Candidate in Bioengineering and a Masters of Business Administration (MBA) Student, Enrique Daza blends twin passions for scientific innovation and implementing those innovations to the marketplace.

In Bioengineering Professor Dipanjan Pan’s Research Lab, he is the chief “particle cook” and a small-scale experiment runner for the iSEE-funded Nano-CarboScavenger Project, which seeks to improve the efficiency and reduce the toxicity of conventional oil spill treatments with nanoparticle technology.

He sees himself and other researchers as scientific entrepreneurs.

“The definition of an entrepreneur is someone who sees where there is a problem and attempts to address that problem,” he said. “In this case, we see that oil spills are absolutely an issue. … We want to fix the issue of oil spill contamination in our oceans and in our large bodies of water with nanomaterial, which is something that hasn’t really been investigated on the mass scale. That’s what we’re really trying to get at.”

Enrique can claim the “Eureka!” moment that solved the first problem while developing the complete Nano-CarboScavenger. When Pan’s team decided to try to tackle the oil spill problem, each member went separate ways to test procedures for making a nanoparticle that would work, he said. Alone late at night in Illinois’ Biomedical Research Center at Urbana’s Carle Foundation Hospital, he observed a test batch of nanoparticles behaving in a way he hadn’t seen before.

“The next day, I showed Dr. Pan, and he was ecstatic,” Daza said. “The whole team swung into action with more tests to run and getting other researchers on the phone. All the planning happened in one day. It was just a feeling like ‘Alright! Let’s go, and let’s get things done and get it published.’ ”

The end result of the team’s collaboration was a nanoparticle with a carbon core and two molecular oil-trapping shells that is hundreds of times smaller than most human cells. It addresses oil pollution in two ways: trapping refined oils like gasoline between the outer shells and the carbon core; and dispersing heavier, “dirtier” crude oils.

Dispersing is the process of breaking down a large slick of oil into smaller blobs that microorganisms found in large water bodies can digest into non-polluting components. Historically, this process has been accomplished by pouring millions of gallons of a liquid chemical called a dispersant into spill zones (7.5 million liters of liquid dispersant was added to the Gulf of Mexico during the Deepwater Horizon spill). Although dispersants stop the harmful effects of the oil, they are reported to have negative environmental impacts on their own.

That’s why Daza is particularly excited about developing a solid dispersant. Unlike a liquid, which becomes part of the water, the nanoparticle power can float on top of the water after dispersing the oil — meaning it can be scooped off the top after use, he said.

“There’s no possible way you’re going to get every single tiny nanoparticle (back out) in the end,” he said. “We designed it that it will be safe after we spread it on to the crude oil. … Whatever is left over the fish can eat, and they’ll be fine.”

Daza was exposed to the problem-solving entrepreneurial spirit early on in his education by his father, a businessman who sells hardware fixtures.

“Thing is, hardware is not my thing. Not a fan,” he said. “I was actually really good at science, and I loved biology so much that that was my major when I went to University of California Merced. And I minored in economics because I wanted to keep that business part of me alive. … I’m good at science, I like science, but there’s so much more to science when it comes to translating science to consumer use.

“Anyone who has tried to turn a technology into any kind of commercialized product understands that there is a huge gap between government-funded research and privately funded commercialization.”

Daza said to get from research to commercial use, “there are so many holes and walls and all kinds of challenges.

“I would hate that an amazing technology like this one would fall into one of those holes or get stopped by one of those walls before it can get out for actual use,” he said. “That’s what my fear is.”

Someday, using his bioengineering and MBA degrees, he wants to establish an incubator initiative with resources for research institutions to turn technologies into commercialized products. Research is where the first kind of new world-changing technologies are found, he says, but academicians are not necessarily at business. The opposite is also true, he said.

“And businesspeople don’t know science, so how will business people know which technologies to fund?” he said. “So, creating an incubator that connects the research side with the business side will really be a big leap forward in how we translate this technology into our world.”

We asked Daza if he felt qualified to be the person to bridge the gap.

Back to Oil Treatment with Nano CarboScavengers research project page