Prairie Zones: Welcome to the Jungle — on the Illinois Campus, Naturally

Prairie Zones: Welcome to the Jungle — at the U of I, Naturally 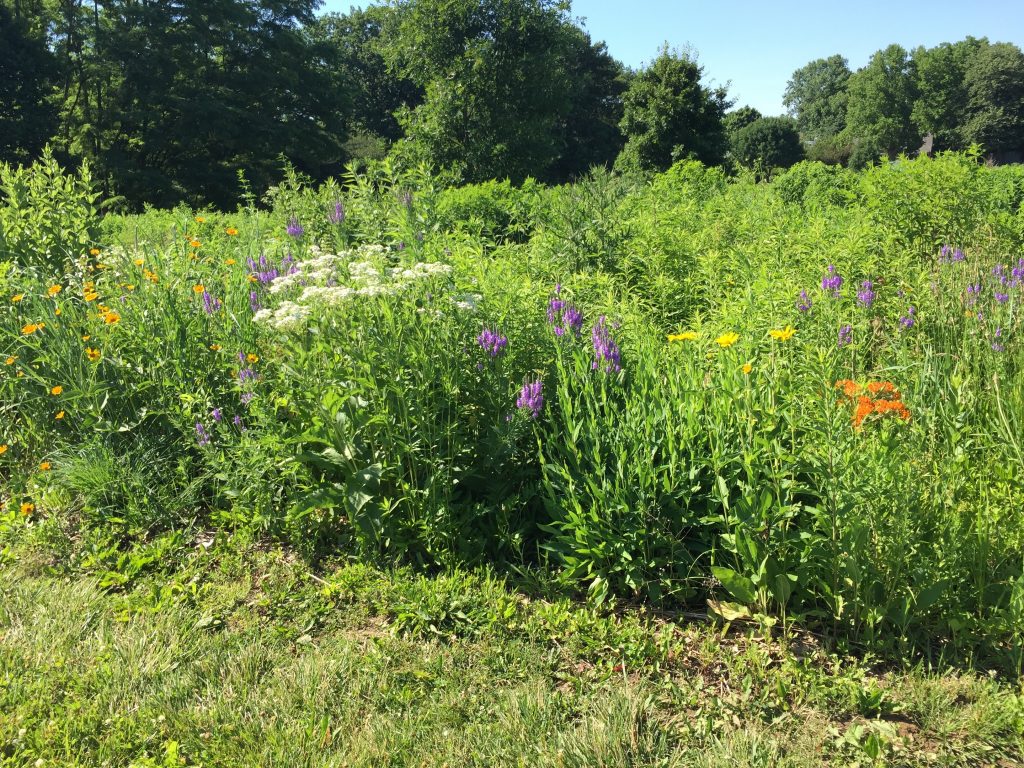 On the southwest corner of Urbana’s Orchard Street and Florida Avenue sits a riotous 2 acres of Illinois prairie. Year-round, the plot offers a stark contrast to the manicured lawns of the University of Illinois president’s residence next door, and no more so than in the high days of early fall, when the thick growth of plants soars 7 feet high and beyond.

Passersby are easily charmed by the effortless, unkempt look of the flowering giants. But the students tasked with maintaining them know the painstaking care involved in their upkeep.

“Well the growth is effortless,” jokes Eric Zarnesky, a student restoration technician with long, sun-bleached hair, who emerged from the prairie’s narrow trail with two fellow workers. These three, all seniors in the Department of Natural Resources and Environmental Sciences, majoring in restoration ecology, tended to the prairie zone throughout the summer of 2016.

“Walking back there, you feel like you are in a jungle,” he says.

“And you come here a week at a time and it looks completely different,” Jessica Mondello adds with a grin, tucking her red hair under a green baseball cap.

They are gloved and sweating, and carry the spoils of their morning hunt: tree of heaven and bush honeysuckle, gentle names that mask the invasive nature of these rapidly growing plants. They are also on the lookout for the less auspicious sounding pokeweed, thistle, and prickly lettuce. 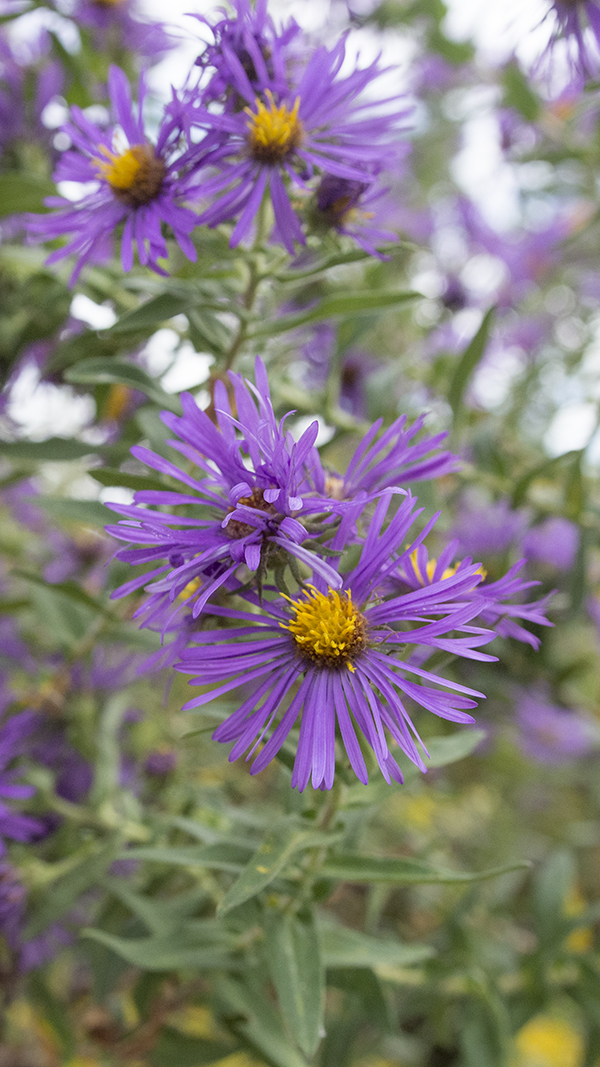 “It is amazing how big some of this stuff is,” Eric says.

Mac Stein, tall, bearded, and suitably outfitted with a hydration pack and a small radio, agrees: “You should see this pokeweed we cut down today. It’s taller than 10 feet.”

He gestures toward the poisonous red-stemmed plant, heavy with clusters of purple berries, lying on the ground a few yards away. It’s big enough for all three students to stand underneath, like an umbrella.

The prairie zone project began in 2010 and was tied to the first Illinois Climate Action Plan (iCAP), with the goal of promoting sustainable landscapes and landscaping practices on campus. Plots like the Florida and Orchard Prairie, featuring native perennial growth, require less mowing and have deep root systems, which capture and store greater amounts of water and atmospheric carbon than traditional turf lawns. The Student Sustainability Committee (SSC) provided the funding, and student groups Students for Environmental Concerns and Red Bison — both based at the University YMCA near campus — provided the muscle.

It got a boost in spring 2012, when John Marlin, a retired Research Affiliate with the Illinois Sustainable Technology Center (ISTC), came on board as the project leader. Under his supervision, volunteers from a number of organizations spent countless hours planting thousands of prairie flowers. Since then they have continually watered, weeded, and collected seeds. Today the field is filled with more than 40 plant varieties, including echinacea, verbena, mountain mint, goldenrod, wild quinine, spider wart, and culver’s root, which the students dubbed “Colleen’s plant,” in honor of the volunteer who identified and nurtured it when it first appeared in the field.

“A lot of our work now is maintenance, removing invasives and stuff like that,” Eric says. “And the holes we are leaving, which are going to be pretty substantial, we are going to fill with some other prairie plants.”

Many of the new plants will be tall prairie grasses, now largely absent, which will provide visual balance as the prairie ages and matures. But at present it is heavily flowered in hues of pink and purple, attracting a host of pollinators — bees of different sizes and shapes, and butterflies. Monarchs flock to the dark pink blossoms of milkweed. So do aphids, tiny sap-sucking insects that crowd along the milkweed stems like lines of yellow pollen. In this sense, another important goal of the prairie zone — to increase habitats for native wildlife — has been met.

The Florida and Orchard Prairie is the most visible and established native planting project on campus, but it is not the only one. Prairie flower and woodland plots have been planted around the Natural Resources Building, Burrill Hall, Pennsylvania Avenue Residence Hall, and, most recently, Lincoln Avenue Residence Hall. 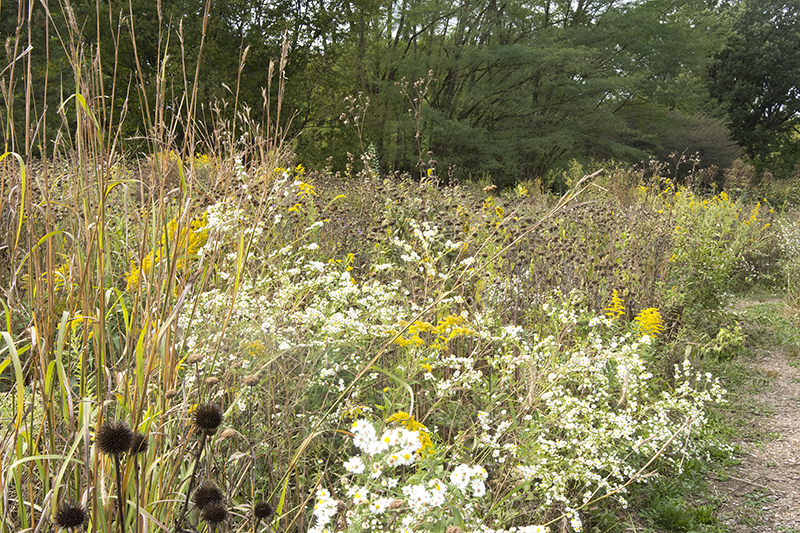 In summer 2016, Jessica, Eric, and Mac also worked at a newer site at the south Arboretum Woods, just north of Windsor Road. The pollinator-friendly native plants intended for the site will provide a lively variation to the Arboretum’s ornamental gardens on Lincoln Avenue. And, John Marlin hopes, educate locals on the benefits and beauty of native landscapes. But before they can plant, volunteers had to tackle the infestation of honeysuckle that rendered the grounds nearly impassable.

“We spent so many hours with chainsaws and machines to grind all this stuff up,” Mac says. “We already see more wildlife now.”

As summer wanes into fall, the zones of native plants will eventually be trimmed to the ground, and the students will head back to class.

“By the end of winter we kind of call it quits,” Mac says.

“Yeah, but we might be doing some collection. And I’ve been out here in the snow to spread seeds,” Jessica says, pausing. “There’s not as much to do, obviously.”

“But there is always something,” Mac says.

Eric agrees: “There is always, always something that could be done.”