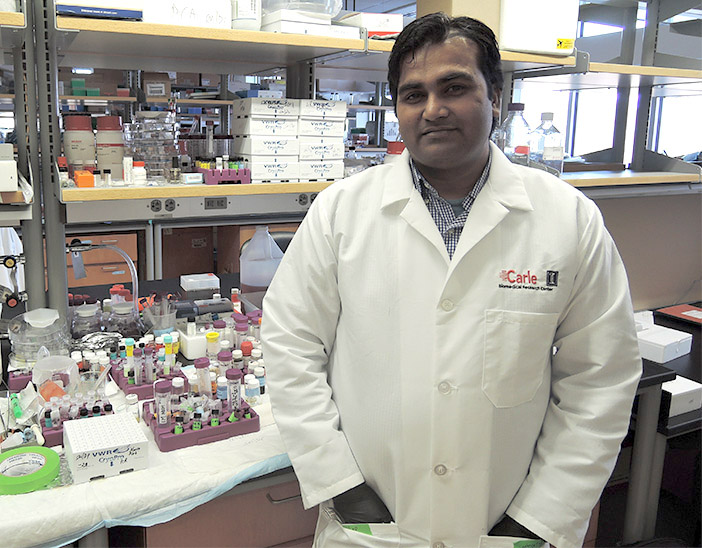 Santosh Misra is a Postdoctoral Research Associate in the Department of Bioengineering at the University of Illinois, and he’s working with Illinois’ Biomedical Research Center at Urbana’s Carle Foundation Hospital.

Misra is one of the brains behind the carbon-based nanoparticle developed in Bioengineering Professor Dipanjan Pan’s lab that is now being fine-tuned for oil pollution treatment.

Misra — like the carbon nanoparticles — has roots in biomedical research.

Throughout his entire educational career, he was curious about the chemistry of nature, including its biology, which led him straight to studying medicinal chemistry, he said. While earning his Ph.D. from the Indian Institute of Science, he studied and created several nano-sized amphiphilic assemblies, which have chemical properties allowing them to cross over membranes of human cells. Because of this, they could be used for gene and drug therapy, where doctors insert genes into a patient’s cells to cure or prevent disease with or without using additional conventional drugs.

“That nanoparticle-based system which I developed, that gave me an idea of the nano world,” Misra said. “When I started studying them with different techniques, it was fascinating to see, analyze, and work with that which I could not see or even image before. That was very interesting.”

After graduating, he looked for ways to continue working in the “nano world” and found Illinois ranked highly in bioengineering programs. Since joining the Pan lab, he’s worked primarily on specialized nanoparticles for anticancer treatments. One of the team’s breakthroughs was the creation of a carbon-polymer-based nanoparticles that could deliver anticancer drugs or destroy DNA in cancer cells to kill them.

The Pan lab, which received funding in 2015 from iSEE to scale up its Nano-CarboScavenger project for adsorbing and removing crude oil from water, has developed many types of nanoparticles for a variety of problems, and the team members are always looking for new applications for them.

“I think this is the beauty of Professor Pan: When he is talking about science, he has no boundaries,” Misra said. “So, we even talk about mummies, how to work on mummies or ecological samples, and sometimes we talk about deep anti-cancer systems and stem-cell therapy. So we discuss wide range of things. It was in one of these informal discussions that oil spills came up as a problem.”

“We were just discussing about, OK, there are a lot of oil spill problems and how to go about (fixing them). Many people are working in this field, but why is it not successful? The first thing that came to our mind: Probably it’s about economical ways of making particles that can do oil scavenging.”

Right now, he says, the liquid and powdered chemicals used to clean up oil spills are expensive and not particularly environmentally-friendly themselves. Misra and the team members each asked: As a material chemist, what kind of materials can I think about that have a very low impact on the environment and can do the job without losing their efficiency?

Having recently had a breakthrough with the carbon-based particles, they turned their attention there, he said. These particles can be made with just honey or agave nectar and a kitchen microwave. Inexpensive? Check.

They also degrade completely within nature within seven weeks with no significant byproducts. Environmentally friendly? Check.

Two molecular layers surround the carbon core of the particle creating two pockets of space. As the Nano-CarboScavenger particles move through oil-polluted water, they trap oil inside the pockets and leave the water behind — swelling in size and clumping together into visible lumps that can be scooped out of the water by a fine mesh net.

Misra takes the environmental impacts of the particles themselves very seriously. Too many so-called solutions fix one problem but create another, he said, and he and the project team are eager to avoid that with their new technology. That’s why he’s so proud of the Nano-CarboScavengers’ ability to degrade to zero.

“There are chances even after scavenging that some of the particles will be left in the water body, and somehow that gets connected to the water source that is being supplied to human colonies,” he said. “(The particles) might reach one of the millionth part — maybe even less than that. But with time if it is not degrading it will keep accumulating and it might increase the concentration, which is not good for the human system. So that’s why degradation is important.”

If the carbon nanoparticles are ingested, he says the enzymes in the human body can degrade the particles in seven days, eliminating the risk of harmful accumulation.

“As a human being, everyone wants a safer future for the next generation,” Misra said. “You cannot say that your future can be good if there is a bad nature. So let nature be as it is. What else can you say?

With a functional oil scavenger nanoparticle created, Misra and the Pan lab are beginning to scale up the technology and address issues that come along with that: how the particle can be made in bulk; and how to deploy the particles most effectively in the polluted water body. They’re also investigating ways to make the particles reusable.

He looks forward to more testing and future success.