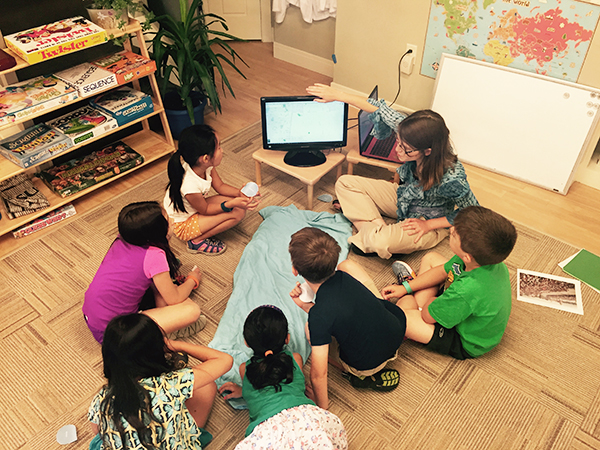 iSEE Sustainability Programs Coordinator Olivia Webb explains to campers at the World Explorers Summer Camp how water — and any trash in that water — from many smaller rivers combine into the “mighty” Mississippi.

Youngsters at the World Explorers Summer Camp in Savoy got a taste for sustainability and environmental science this month through a pair of lessons on watersheds and biodiversity taught by iSEE Sustainability Programs Coordinator Olivia Webb.

In their first lesson, the children learned about the importance of biodiversity by taking on the role of an animal in an ecosystem. Campers tossed a ball of string from animal to animal to animal to trace the connections between species. “In the end we were all connected by this big web, and if you pulled on any one of us, we’d all fall down,” Webb said, “That’s what biodiversity is all about — interdependence and strength in variety.”

Webb returned a few weeks later to talk about watersheds. Each of the children was given a paper raindrop with the name of a city or state in the Mississippi River watershed. Using Google Maps, they followed the flow of the Embarras River from its origin in Champaign all the way through many tributaries to the Mississippi River and then to the Gulf of Mexico, adding their raindrops to the center of the circle when their city or state was found on the route. 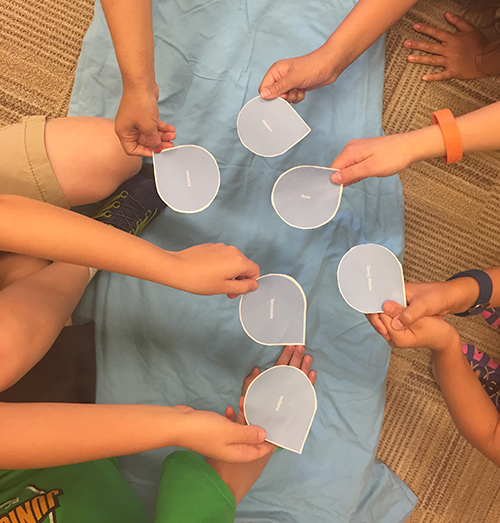 Campers show off their raindrops that represent tributaries of the Mississippi River.

Founder and teacher Graziela Lima was a biology teacher in her home country of Brazil and started a new program for environmental education to carry on this passion almost as soon as she arrived in Champaign-Urbana three years ago. She invites guest speakers to her summer camp almost every day of the week to give students as broad an experience as possible.

“I think it’s important for them to know that we have this big community that has other good things going on around us,” she said.

For Webb, working with young children wasn’t something she was expecting to do in her role at iSEE, but she believes it’s important for the future of sustainability:

“You’re not going to be very motivated to solve complicated environmental problems unless you’re starting from a place of love and emotional attachment to the environment, and that starts when you’re a kid,” she said. “I try not to talk about the problems in too much detail because these are 6- and 7-year-old kids. If you start talking to them about the problems, all you’re going to do is make them feel powerless and make them want to disconnect. So what I’m trying to do is build emotional connection so as they grow older they’re motivated to do something about the problems that they’re seeing.”