FEB. 14, 2017 — In all likelihood our world will depend on petroleum and petroleum-derived products for many years to come. And as long as this industry continues to produce energy for the world, bodies of water worldwide will be susceptible to oil spills, which are notoriously expensive and difficult to clean up. Boats dragging nets or skimming the water’s surface with suction machines can capture the bulk of spilled oil, but a thin film often remains and does untold damage to the aquatic ecosystem. Millions of gallons of liquid or powder chemical dispersants may be applied to a spill area to break up large oil slicks, but these dispersants are reportedly just as toxic to the environment as the oil spill they seek to remedy.

Now, scientists at the University of Illinois at Urbana-Champaign are offering a new hope to combat oil spills: a novel, environmentally friendly remedy that attacks the problem at an atom-to-atom level.

The Nano-CarboScavenger (NCS) is a particle hundreds of times smaller than most human cells. Developed by the Dipanjan Pan Lab at Illinois, the NCS powder simultaneously diffuses oil floating on the water’s surface for natural breakdown and absorbs oil and traps it for easy removal. Pan recently reported results in an article in Scientific Reports, one of the Nature Research journals.

In laboratory tests, researchers removed more than 80 percent of oil contamination they introduced into water samples by sprinkling NCS powder across the surface of the water and scooping out clumped oil. The total cleaning effect will be even higher in natural bodies of water, where millions of microorganisms can gobble up oil molecules NCS particles disperse into the water.

“We are trying to bring a next-generation solution to the oil spill problem, keeping in mind that most state-of-the-art agents used today are not biocompatible: That is, not environmentally or human-friendly,” said Pan, an Assistant Professor of Bioengineering at Illinois.

Pan’s team carefully evaluated the requirements of a solution, and decided that with some elegant chemistry only possible at the nanoscale level, the NCS could do what no other treatment does: both absorb oil to speed surface removal; and also separate large oil slicks into smaller amounts for easy biodegradation. The NCS powder works on both crude oil and oil distillates like gasoline.

“Once you are putting any foreign material in the natural system, it is important that the amount of material should be as small as possible, but should (work on) the oil at a maximum,” said Santosh Misra, a Postdoctoral Research Associate in the Pan Lab. 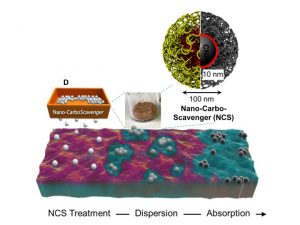 The particle’s unique structural design grants its dual function. Two molecular layers surround a core of elemental carbon, creating two pockets of space. As NCS particles move through oil-polluted water, they gather oil inside the pockets and leave the water behind — swelling in size and clumping into visible masses that can be easily scooped out of the water by a fine mesh net.

The chemical properties of the particle’s outer shell also allow it to lower the surface tension of polluted water, making the water molecules less “grippy” to each other and letting other molecules sink beneath the surface. After NCS treatment, oil can break up into smaller blobs that naturally occurring microorganisms can digest into non-polluting components. The NCS developed at Illinois is the first non-liquid solution to work this way — and, as a powder, weighs significantly less than liquid alternatives.

After NCS powder is spread over an oil spill, most will get scooped back out, but a small amount will remain in the ecosystem.

“There’s no possible way you’re going to get every single tiny nanoparticle back out in the end,” said team member Enrique Daza, a Ph.D. Candidate in Bioengineering. “So we designed it to be safe after we spread it on to the crude oil. … Whatever is left over the fish can eat, and they’ll be fine.”

According to the lab’s tests, NCS particles that find their way into animals and humans will be completely digested in just seven days — and broken down in slower plant metabolisms in about eight weeks.

“It’s shown to be nontoxic, and it’s generated from bio-based materials,” Scott said. “Other applications may include treatment of legacy pollutants, emerging contaminants, and biomass to energy wastewaters.”

Said another key investigator, ISTC Senior Research Engineer Brajendra K. Sharma: “Current cleanup methods can themselves introduce environmentally undesirable contamination to the impact zone. NCS particles are not only effective for petroleum spill cleanup, but can also be used for recovery of crude oils and are found to be biodegradable, even if left in water bodies for dispersion of oil spills.”

The true beauty of the particle might be that it is simple and relatively inexpensive to make. The first ingredient is all-natural agave nectar or clover honey — the kind you see on supermarket shelves. Just a few minutes of irradiation in a standard kitchen microwave forms the carbon cores for NCS particles.

Compared to the performance of top competitors in the market, the Illinois team’s NCS powder is “up to par,” Pan said. “Owing to their astute chemistry a unique multi-shelled structure was developed comprising a carbon dot nanoparticle as its base. Multiple compartmental polarity within the layered shell drives hydrophobic-hydrophobic interactions between oil molecules and the nanoparticle. Depending on this interaction, particles either capture or disperse hydrocarbon molecules.

“This stuff really works, it is easier to handle, store, and distribute — and it has none of the negative environmental impacts. It’s a win-win-win across the board.”

The next step for the Pan Lab is to scale up production of the NCS particles for commercial use. The team is also exploring the quality of the oil that can be recovered from particles after being scooped out of water.

Other collaborators in the project include Santanu Chaudhuri, a Principal Research Scientist at the Illinois Applied Research Institute, and Jacek Topczewski, a Research Associate Professor from Northwestern University’s Feinberg School of Medicine. The NCS research project was seed-funded by a 2015 grant from the Institute for Sustainability, Energy, and Environment (iSEE) at the University of Illinois at Urbana-Champaign. Read more on iSEE’s webpage about the project >>>