On Oct. 21, American journalist, sportscaster, TV host, and now-filmmaker Angela Sun visited the University of Illinois at Urbana-Champaign to present her independent documentary “Plastic Paradise: The Great Pacific Garbage Patch.” Her message: Disposable plastics are all around us, and they are doing the world much more harm than good. 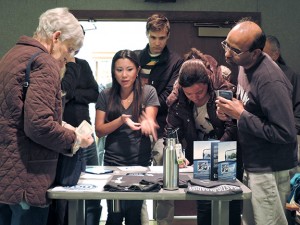 Angela Sun visits with attendees after the screening of her film ‘Plastic Paradise: The Great Pacific Garbage Patch’ on Oct. 21, 2014, on the University of Illinois Urbana-Champaign campus.

On the eve of Sustainability Day 2014, more than 130 students, faculty, staff, and community members gathered at the National Soybean Research Center to view “Plastic Paradise” and discuss the issues the film brought up. After viewing the 57-minute documentary, Sun answered questions about her experience making the film, the seriousness of plastic pollution, the barriers to reducing the use of plastic, and how we can remain hopeful for solutions.

The film screening and discussion were co-sponsored by the Institute for Sustainability, Energy, and Environment (iSEE) and the Illinois Sustainable Technology Center (ISTC), a division of the Prairie Research Institute.

As a resident of Hawaii and coastal California, Sun has always been fascinated by water. Inspiration from her film came from the rumors she heard about an island of garbage somewhere in the Pacific Ocean. She decided to get to the bottom of the myth. Not only did she find an island covered in tens of thousands of pounds of plastics, but she also began to uncover the frightening story of human dependence on a material that is designed to last forever — and yet is treated as disposable. Nearly every piece of plastic manufactured since the invention of the material is still on this planet somewhere, she claims, and it is having an impact on our environment, from killing fish and birds to destroying coral reefs to poisoning our bloodstreams with chemicals leached from plastic into food and drink.

Despite the grim outlook of overpowering the plastic norm in our society, Angela remains hopeful of a solution. When asked what a world would look like without plastics, Angela replied that we’ve seen that world before, pointing to the 1960s and earlier. Many things were more work then (for example, you had a milk man delivery as opposed to purchasing a plastic gallon container at the supermarket), but it was — and is — possible to lead quality lives without plastic, she said. In the end, Sun believes that consumers, industry, and government will all need to play a role in toppling the plastic monster.

View photos of this event on the iSEE Facebook page.