UPDATES: After returning from the Paris Climate Convention, Stephen Long sat down with Illinois Public Media’s Christine Herman to talk about his experience on the world’s largest stage for climate advocacy. Hear the interview and read the story on WILL’s website.

The Grantham Center for Sustainable Futures has published the slideshow presentations from all five speakers of “Research Challenges Associated with Developing a Climate-smart Agri-food System” panel, including Steve Long. Get an inside look at the topics discussed in the session.

Agricultural innovation is needed now — not later — to avoid food shortages in a world with an ever-changing climate and a growing population. 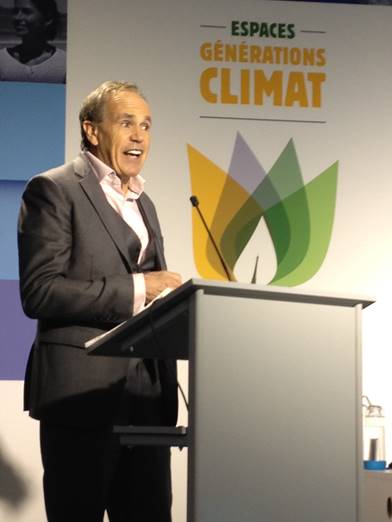 More formally known as the 21st Conference of the Parties (COP21) to the United Nations Framework Convention on Climate Change (UNFCCC), the Paris conference’s primary goal is the crafting of an international agreement to reduce global greenhouse emissions.

In addition to these formal negotiations, COP21 also offers a public promenade and lecture space that holds side events aimed at information sharing, debate, and promoting solutions. It is in this setting of international action that Long spoke.

Long, an Institute for Sustainability, Energy, and Environment (iSEE) Professor, was part of a slate of six speakers invited by the Grantham Centre for Sustainable Futures at the University of Sheffield to discuss the research challenges associated with developing a climate-smart agri-food system. Each speaker presented for five minutes, then took part in a question-and-answer session.

“I will be bringing the issue of sparing or sharing land for agriculture,” Long said in an interview before heading to France. “With the projected increase in global food demand — which the United Nations says will be 70 percent more by 2050 — we have to increase productivity per unit area of land we’re using now.”

One of his key points was that society has managed to keep up with agricultural demand over the last two centuries through a series of innovations.

“Right now society is pushing back on agricultural innovations,” said Long, the Gutgsell Endowed Professor at Illinois, and a Fellow of the Royal Society (2013), the American Academy for the Advancement of Sciences (AAAS), and the American Society for Plant Biology (ASPB).

“We actually need to overcome that; otherwise, we’re going to create more problems for ourselves.”

One of those problems is adding more land for agriculture, a process that generally manifests itself as natural ecosystems being transformed into farmland. With such land use change comes greenhouse gas emissions, the issue at the heart of the Paris convention.

He hopes his audience took away a sense of urgency from his short talk.

“Developing the technology to increase productivity needs to happen now because any innovation we have now will not be in the farmer’s field for 20 years. So, you know, given that we’ll need 70 percent more food by 2050, we need to be doing this now because we cannot afford to wait.”

Long’s most recent work has focused on this urgent grand challenge by addressing the bioengineering of photosynthesis and its adaptation to global change to increase the yield of bioenergy and food crops. To that end, he serves as Director of the Realizing Increased Photosynthetic Efficiency (RIPE) Project, a Bill and Melinda Gates Foundation-supported effort among several institutions to increase the yield of staple food crops in developing countries by improving C3 photosynthesis.

In July 2015, iSEE awarded Long more than $350,000 toward his latest collaborative project titled “Plants in silico”. This research aims to develop a computer model that would allow the research team to manipulate a virtual growing environment and observe the resulting response of modeled crops. Rather than taking an entire growing season to test a hypothesis, a detailed and accurate computer model could allow plant biologists and crop scientists worldwide to run an entire experiment in just days, leading to faster breakthroughs.