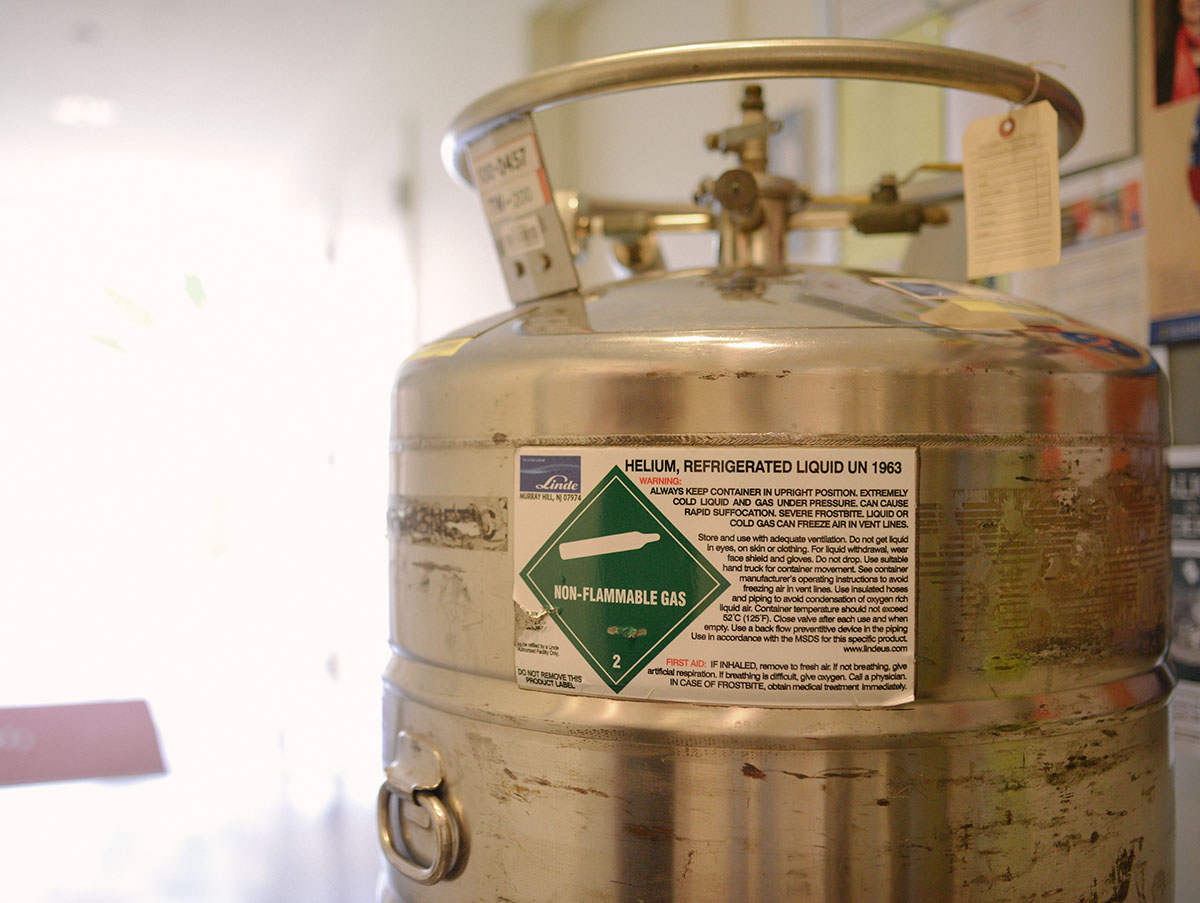 MARCH 12, 2015 — The University of Illinois’ latest recycling initiative has nothing to do with paper or plastic but instead focuses on the sustainable use of helium.

The lighter-than-air gas that fills party balloons is also a linchpin for millions of dollars of chemical and engineering research on the Urbana-Champaign campus, so the University is improving and expanding its helium recycling infrastructure to make use of the element more sustainable.

The Department of Physics has invested $600,000 in new air compressors, increased gas storage capacity, an underground transportation pipeline, and a remote helium collection bladder to increase the amount of helium gas collected and recycled.

Helium’s primary application on campus is as a liquid: it is used as a coolant for superconducting magnets, which carry a stable electrical current that scientists use to investigate the molecular structure of anything from pigments and building materials to pharmaceutical compounds and food flavors. To carry the uniform electrical current necessary for research, the magnets must be kept extremely cold — and at -452 degrees Fahrenheit, liquid helium is the only thing cold enough to get the job done.

Although it is the second-most abundant element in the universe, helium is rare on Earth. It is mined from natural gas concentrations but only accounts for 2 percent to 7 percent of the mix of gases found in an average deposit. Because of its rarity, helium is also very expensive. One liquid liter costs almost $15, while a liter of liquid nitrogen — the next-most-popular cooling agent used in labs — costs $1.

“It became apparent in the summer of 2013 that we needed to take control of our helium destiny,” said Eric Thorsland, senior research engineer in the Department of Physics. “Our gas supply that we use to make liquid helium in Loomis Lab that summer was cut off.”

That year, the Department had all the money it needed to make the purchase, but it couldn’t buy from its supplier, he said.

At best, lack of liquid helium causes inconvenience and delays, but at worst it can cause hundreds of dollars of damage to equipment. If not refilled regularly with new, cold liquid helium, a magnet may “quench,” boiling off all its coolant so quickly that it effectively breaks itself.

No one worries about this more than Dean Olson, Director of the U of I’s Nuclear Magnetic Resonance (NMR) Lab, which houses 11 superconducting magnets. 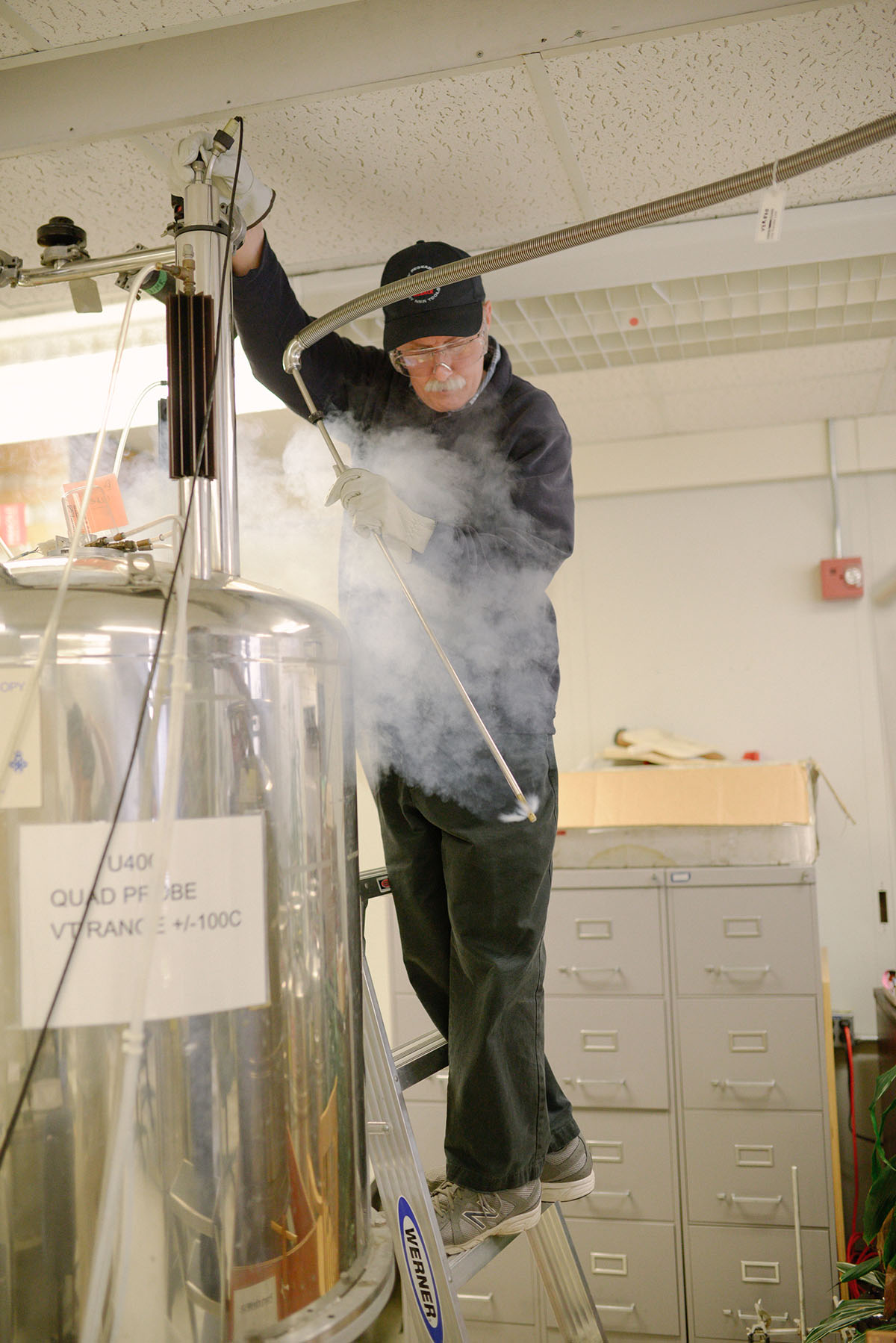 NMR Lab Director Dean Olson, surrounded by a “plume” of escaping helium gas, prepares to insert a liquid helium filler into a superconducting magnet apparatus. With the new recycling infrastructure in place, plumes and regular boil-off of helium will be captured, re-liquified and resupplied to magnets. Photos by Sonny An/iSEE Intern

“We’ve got a dependence on helium,” he said. “I’ve got more than 400 users in 75 research groups and outside clients using the lab. If they couldn’t do research because we run out of helium, they wouldn’t know what to do. You can calculate the research grant dollars lost, but it’s impossible to calculate the lost value of the education students get from working with the technology — and of the developments that come from this research.

“So on-site helium recycling is really important for protecting us from supply fluctuations that interrupt research.”

Despite helium’s precious nature to researchers, its usage has been historically wasteful. Liquid helium surrounding a superconducting magnet boils off as it absorbs the magnet’s heat — and is permanently lost into the atmosphere and then into space (helium is one of the only elements that exits Earth’s atmosphere). Although this evaporating gas can be measured, it has not previously been stopped.

Recognizing the wastefulness of helium practices and the rising cost of the commodity, the University implemented its original helium recycling system in 1960. Today, more than 50 percent of the helium used on campus is recaptured from magnets in Loomis Lab, the Materials Research Lab, the Superconductivity Center and the Engineering Science Building. The Department of Chemistry, although the most prolific user of helium on campus, had previously not recycled helium primarily because of its physical separation of several blocks from Loomis.

That’s all about to change.

During the four-week winter break between semesters, a horizontal pipeline was drilled underground from the basement of the Chemical and Life Sciences Laboratory A building to the basement of Loomis Lab — a tricky operation accomplished with engineering and coordination help from Facilities & Services, which also offered knowledge on the best route to run the recovery line.

As this bag fills with captured helium, a fan will blow the gas through the underground pipe to the physics liquid helium facility in Loomis. Once there, the helium is pressurized and stored in tanks to await reliquification and redistribution to superconducting magnets around campus.

At peak efficiency, the improved and expanded recycling system should capture as much as 95 percent of campus helium, said Jerry Cook, Department of Physics facilities manager. And that means significant savings for researchers.

Today, Cook sells liquid helium to researchers for about $15 per liter. When the new system achieves 90 percent recycling efficiency, the price will drop to less than $9 per liter, saving campus users more than $211,000 annually. Prices could go even lower (approaching $5 per liter, depending on market fluctuations) after the new infrastructure sees full return on the Department’s $600,000 investment — which it is predicted to do in two to three years.

Cost savings and stability for researchers is a big bonus of helium recycling, but as Olson says, “the big idea for the project is to buy less new helium. It really is a sustainability issue because helium is a natural product.”

Releasing helium into the environment is not a hazard, said Ken Wooldridge, Operations Manager of the School of Chemical Science.

“But in my mind, any time we can save a natural resource, it just makes sense,” Wooldridge said.