On Sustainability Day 2014 (Oct. 22), the University of Illinois Urbana-Champaign community received an update on campus progress toward its sustainability goals at the iCAP Forum hosted by the Institute for Sustainability, Energy, and Environment  (iSEE). 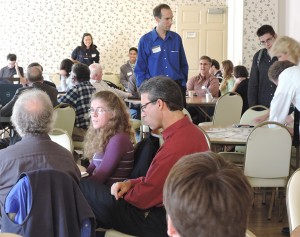 In 2010, the Illinois Climate Action Plan (iCAP) was published as an outline for the University to achieve carbon neutrality by 2050. Almost five years on, the time has come to evaluate where the campus stands and what direction it must take next to fulfill its commitments including a stated goal of carbon neutrality by 2050. The task of performing such an evaluation fell to the six Sustainability Working Advisory Teams (SWATeams) established by iSEE last year. At the iCAP Forum, each SWATeam gave a brief state-of-the-iCAP presentation for its area of focus, then answered questions and noted suggestions from the audience of about 90 throughout the three-hour session.

Professor Ben McCall, iSEE Associate Director for Campus Sustainability, kicked things off with a presentation of the overall direction the university is heading. In some areas, like reduction of energy consumption, greenhouse gas emissions and potable water usage, the campus already has met the 2015 goals. In other areas, like reduction of GHG from transportation, the U of I has actually lost ground.

Prof. Bruce Branham made the presentation for the Agriculture, Land Use, Food, and Sequestration team. He noted that Dining Services is a major star on campus for its efforts, especially in reducing campus food waste. He also said that further efforts to meet campus agriculture goals will require “significant investment,” such as the purchase of an anaerobic digester for South Farms waste. Here is the team’s PowerPoint presentation.

The Water and Stormwater presentation, made by student team members Amy Liu and Lance Langer, pointed out that future water conservation efforts must be made by looking at the issue from the end users on up to the suppliers. The long-term planning must start now, they said, and conservation efforts must be standardized across campus. Here is the team’s PowerPoint presentation.

Student members Grace Kyung (iSEE’s Graduate Intern for Sustainable Transportation) and Justin Licke presented the Transportation SWATeam’s report. The message: Reduction in transportation emissions — the lion’s share of which is accounted for by air travel — simply hasn’t happened on our campus. New strategies are a must, and the U of I should try to find local carbon offsets for air travel. Here is the team’s PowerPoint presentation.

The Purchasing, Waste, and Recycling team, represented by Prof. Warren Lavey, congratulated campus on exceeding goals for keeping waste out of landfills, but also pointed out some flaws. Some of the student team members felt they had better recycling programs at their high schools than the ones in place on this campus, Lavey said. Improved standardized recycling signage and awareness is essential, the team said, and campus leadership must position environmental consciousness as a matter of school pride  for the University to reach its goals. Here is the team’s PowerPoint presentation.

The Energy Conservation and Building Standards team, represented by Prof. Brian Deal, reported that the campus is doing well overall on goals in that area. “Even in a bad year, we are exceeding energy conservation goals,” Deal said. To continue the success, the team suggested more policies and programs to target personal responsibility and efficiency. Here is the team’s PowerPoint presentation.

At the end of the Forum, Facilities & Services recognized the University’s greatest energy savers. The Facilities & Services’ Energy Conservation Incentive Program (ECIP) awards building upgrades to campus structures based on the percentage of energy they save from the most recent fiscal year compared to the previous fiscal year.