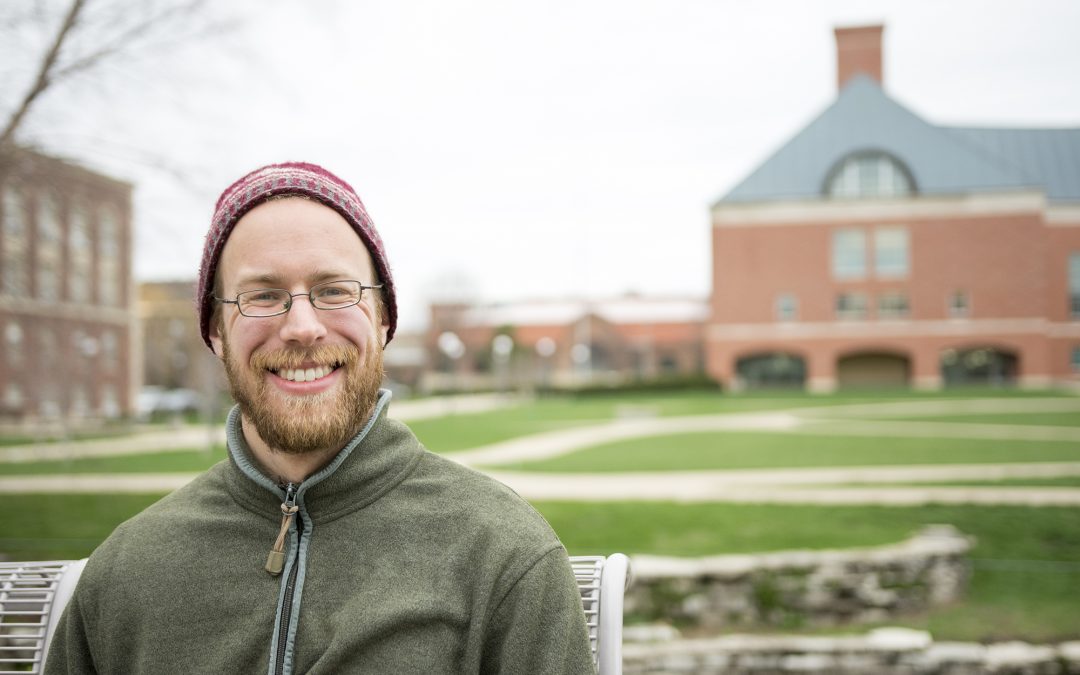 That’s how Ian Goller explains his work with the Agroforestry for Food (A4F) team at the University of Illinois at Urbana-Champaign.

Before coming to the U of I, Goller completed his B.S. in Anthropology at the University of Chicago with a minor in Physics. He still hadn’t figured out exactly what he wanted to do with his career. But he was ready to try just about anything — working as a tutor, creating his own nonprofit, and practicing as a better-than-average hand-stander with experience in aerial silks.

While testing out a variety of different fields, Goller ended up at The Plant, a collaborative community of food businesses based in Chicago. His main gig was to test if the company could reuse waste products from their coffee roaster and brewery to create energy to run the bakery.

“You have to use so much energy to get the water out of it, it becomes obsolete,” he said. 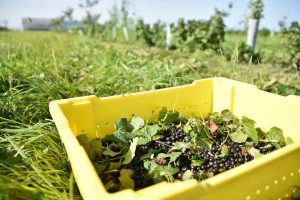 Black currants — one of the main crops grown as part of the Agroforestry for Food project.

But this entry into Life Cycle Assessment (LCA) is what eventually brought Goller to the U of I campus to pursue his M.S. in Environmental Engineering. LCA is not typically used for agriculture.

“It is most typically used for consumer products,” he said. “The most quintessential LCA problem is, is it better to make soda bottles out of glass or plastic?”

The cycle starts at the production chain. First, break the object or situation down to the raw materials being used and how those materials are processed. Eventually, track what material is actually being introduced into the market.

Goller is taking this process and applying it to agricultural systems within the A4F project, which is investigating alternative options for agriculture in the Midwest. The work is conducted on 30 acres at the Illinois Energy Farm.

“I separated (the seven crop mixtures, called treatments) a little further, into 10 different scenarios, which I’m now analyzing,” Goller said. “I’m basically taking the agricultural scenarios that they have going on down there at the farm, and modeling all of them in Python.”

Data analysis wasn’t always his passion. It wasn’t until the summer before coming to the Illinois that he taught himself the basics of Python, a computer programming language used for coding software.

“I quickly found that the basics didn’t cut it,” he said. “It has been an adventure. Now that I’ve figured out a good way to use data analysis, it’s really cool. There was definitely a learning curve in figuring out how to do the work that I need to do.”

Similarly, Goller discovered his passion for sustainability along the way. His first introduction to sustainability as data to be coded and analyzed came when he worked with The Plant, but he quickly found himself immersed in the subject at Illinois.

“I applied to the engineering program, and I was more interested in the agriculture side of things,” he said. “In the course of me figuring out what I wanted to do with myself, I got really interested in permaculture, which is an agricultural methodology that is focused on really thinking about the ecosystem implications of agriculture and food production.”

Agroforestry does just that. The A4F team is seeking better ways to integrate the ecosystem back into agriculture, specifically with crops like hazelnuts and chestnuts. By using these crops, and varying cross-sections, agriculture can transform from being an annual rotation to a perennial crop mixture.

Goller explained: “When you’re looking at different systems like this, all the different qualities they’re trying to capture will require different methods in terms of how you would analyze them to do it effectively, to get a meaningful comparison out of it.”

This is what makes his end of analysis so important.

“LCA deals a lot with what inputs you have into a system and how you manage that system,” he said. “So I’m looking at fertilizer use, and pesticide use, machinery equipment, that type of thing, and how it gets applied to different crops.” 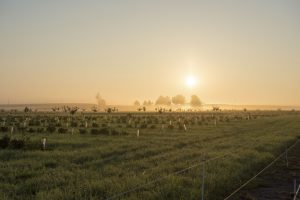 The Agroforestry for Food plot at the Illinois Energy Farm.

He has now developed a strong interest in these diversified agricultural systems.

“The big basis of the field trials that they’re doing is using these more diverse agro-ecosystems, like perennials or polycultures,” he said. “There are a lot of different qualities that they’re looking at, which I’m further going to start to break down and analyze.”

When it comes to investigating what’s better for the environment, it turned out that a lot of results centered on problems caused by fertilizers, herbicides, and pesticides.

Unsurprisingly, “the more you put down, the worse it is for the environment,” he said.

For someone trying to figure out the most sustainable way to produce agriculture for our planet, a type of permaculture is the best way. This type of agriculture would allow for plants to grow all year round and provide the soil with basic nutrients — obtained through the decomposition of the plants.

Looking to the future, Goller is hoping to work for the Savanna Institute, a nonprofit aimed a laying the groundwork for agroforestry in the Midwest. The founder of the Institute was also a part of the A4F project at Illinois.

“They has a conference both years, which has been a really good opportunity to meet people working on these diversified cropping systems and agroforestry-type projects,” he said.

Goller is a busy and determined researcher, who admittedly has a bunch of projects — “five or six in rotation” in the works.

But when he does get free time, he can probably be found outside rock climbing. It is evident that on all scales, nature has, and always will be, high on Goller’s priority list.