Huge Success for Illini Lights Out 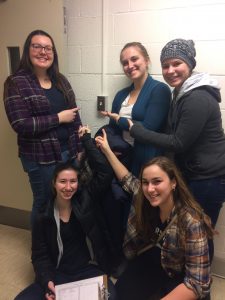 During seven “Illini Lights Out” events throughout the 2016-17 school year, teams of student volunteers turned off more than 11,000 light fixtures in buildings on or near the Illinois Main Quad on Friday evenings. One bulb at a time, this small action taken by more than 200 student volunteers saved campus about $3,400 in energy costs — not to mention lengthened the lifespan of several thousand lightbulbs.

Organized by iSEE’s Energy Conservation and Building Standards SWATeam, Illini Lights Out aims to demonstrate the immense energy-saving impact of simply turning off lights when you leave a classroom, lab, or study space.

The initiative began as a one-off event in spring 2016 — at which students managed to turn out 1,500 lights in just 40 minutes — and expanded to a monthly happening during 2016-17 with the support of a grant from the Student Sustainability Committee.

“The energy and cost savings achieved by the students is truly impressive,” said Karl Helmink, campus Associate Director of Utilities and Energy at campus Facilities & Services (F&S) and a SWATeam member. “It’s only one very small drop in the $35.5 million bucket of F&S’s annual electricity budget, but it is a simple way for students to be involved in energy conservation efforts.”

“I have noticed that in some areas where we’ve done the Lights Out program that lights are now being shut off on a regular basis, so hopefully we are raising awareness and having impact beyond the event,” he said. “When I participated, I even found some steam heating leaks that need repair. So, there will be even more improvements there.”

“The Illinois Climate Action Plan (iCAP) calls for engaging and incentivizing the campus community to conserve energy. Illini Lights Out carries out that objective perfectly,”said Marian Huhman, Adjunct Assistant Professor of Communication and Chair of the SWATeam. “With behavior change, many people think awareness and education are enough to bring about change — wrong. Getting people to DO a behavior changes their attitudes and starts a habit. We are changing the culture around the simple action of turning off a light switch.” 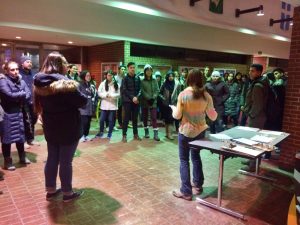 On a chilly February night, teams of student volunteers received instructions for recording the number of lights left on in buildings and guidelines about turning them off.

Alex Dzurick, a Graduate Student in Educational Policy and Leadership, is one of two student members of the SWATeam. He said he thought lights get left on because students and staff don’t feel they have the authority to touch a switch.

“I think people don’t feel it’s their responsibility — that they aren’t allowed to mess with settings or that a building worker will come along after them to close down for the night. That’s not the case,” he said. “As a society, I think we’re good about knowing to turn off lights at home, but it hasn’t yet translated to public spaces.

“We hope to show our volunteers and the people who are following our progress that you CAN turn lights out. If someone else needs them on after you, it’s not too hard to flip that switch again.”

iSEE hopes to continue the Illini Lights Out program into the 2017-18 academic year. Stay tuned to iSEE’s Facebook page for the latest announcements.

Read more about the Illini Lights Out program >>>