Geothermal Energy: Coming to a Midwest State Near You (Part I) 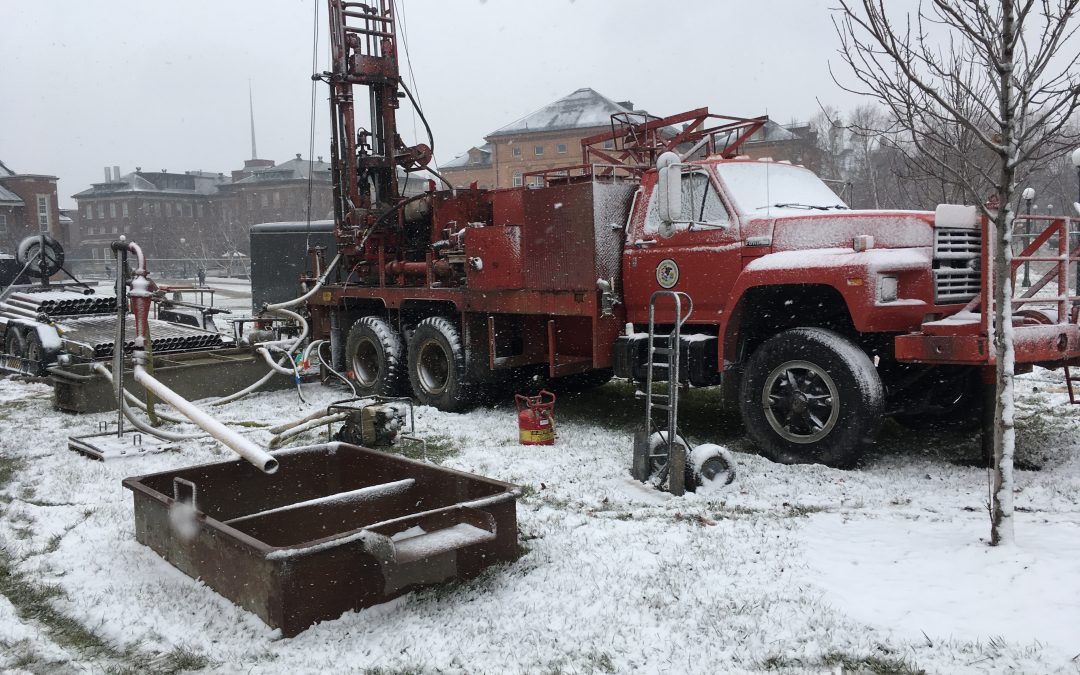 EDITOR’S NOTE: This is is the first installment of a three-part series on geothermal at the University of Illinois at Urbana-Champaign. In this installment, we explore the science of geothermal and its relationship with the University. Part 2 takes a deep dive into the geothermal research conducted at Illinois, and Part 3 will focus on areas of campus using or planning to use the renewable energy.

Innovative research at the University of Illinois is exploring a clean energy source hidden right under our noses — and feet.

Geothermal energy, the subterranean space heater responsible for hot springs, geysers, and volcanoes, has been a subject of public fascination, recreation, and research for thousands of years. Now, as society begins to depart from its dependence on fossil fuels, geothermal emerges as an important renewable energy resource.

Whether you’re an accomplished researcher, aspiring scientist, or renewable energy advocate, acquiring a working knowledge of geothermal energy begins with a single question: What exactly is going on underground?

What is geothermal energy?

On the surface, geothermal energy is exactly what it sounds like: potential thermal energy (thermos) sequestered in the ground by earth materials (geo). This explanation captures the energy’s essence, but according to Illinois Water Resources Center Director Yu-Feng Forrest Lin, the topic is much more than meets the eye. This is mostly due to the complicated sciences of groundwater and geology.

“Our knowledge about the hydrogeology of aquifers in deep sedimentary basins, and the temperatures expected at these depths, puts us at the forefront of research,” Prairie Research Institute Geologist Andrew Stumpf said. 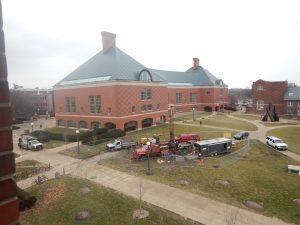 Geothermal power plants are the lower-carbon emissions versions of their fossil-fueled counterparts (e.g., coal, oil, and propane)  and generate electricity in a similar manner. Geologic reservoirs of hot water or steam at temperatures greater than 150°C are drilled into and pumped out through pipes to mechanically turn a series of steam turbines. Because these plants rely on one of Earth’s most naturally occurring resources, they are considered one of the most sustainable methods for large-scale electricity generation.

Geothermal power plants are most prevalent in volcanic terrain like the U.S. West, but researchers in the Midwest — and at Illinois — are more focused on advancing direct-use technologies. These technologies harvest energy from reservoirs residing at shallower depths and containing lower-temperature geothermal waters. Because U of I researchers’ objective is to reduce rather than replace electricity usage, the fluids are used “as is” rather than augmented by mechanical equipment like heat pumps or heat recovery chillers.

The University of Illinois’ research into geothermal energy can be broken down into two main efforts, the first of which is called deep direct-use (DDU).

Referred to by the U.S. Department of Energy (DOE) as “low temperature deep direct-use,” DDU is the process wherein geothermal waters at cooler (i.e., less than 300°F)  temperatures are extracted from the deep subsurface and pumped directly to the location requiring heating or cooling.

“(The water or brine isn’t) hot enough for electricity generation,” Lin said, “but (it is) warm enough to harvest the heat.”

While geothermal power plants are typically constructed to service large regional populations, Illinois’ proposed DDU system would operate on a smaller district scale. The system would offer end-use energy for space-heating, air-conditioning, and refrigeration in a cluster of buildings along the College of Agricultural, Consumer and Environmental Sciences’ “ACES Legacy Corridor.”

In 2008, the U.S. Energy Information Administration reported that about one-third of the entire U.S. energy demand was for thermal energy use. Eighty percent of this use was for heating at temperatures below 300°F — which could be met by direct-use geothermal systems.

Currently, the University of Illinois houses one of six DOE-funded projects whose mission is to determine the feasibility of deep direct-use geothermal on university campuses and military installations. 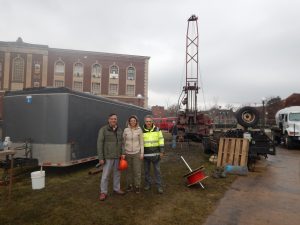 U of I researchers’ second focus is to evaluate the process of geothermal exchange for improving the efficiency of heating and cooling systems used in campus buildings.

The efficiency of this process is highest in regions like the Midwest, where the temperature range is the greatest. Geothermal exchange systems are used to condition indoor air to even out climatic extremes and conform indoor temperatures to the typical comfort level of 70°F, reducing upward spikes in energy use (and the monthly HVAC bill) in the process.

While wildly oscillating weather patterns wreak havoc on traditional energies, geothermal is a proven stronghold against even the most extreme conditions. Case in point: the January 2019 Polar Vortex event, which pulled temperatures across Illinois into the negative double digits. Willenbrock — a geothermal homeowner himself — experienced its power firsthand as his home maintained temperature in the midst of -15° conditions.

“Far and away,” Willenbrock said, “the most efficient way to (heat and cool buildings) is geothermal.” 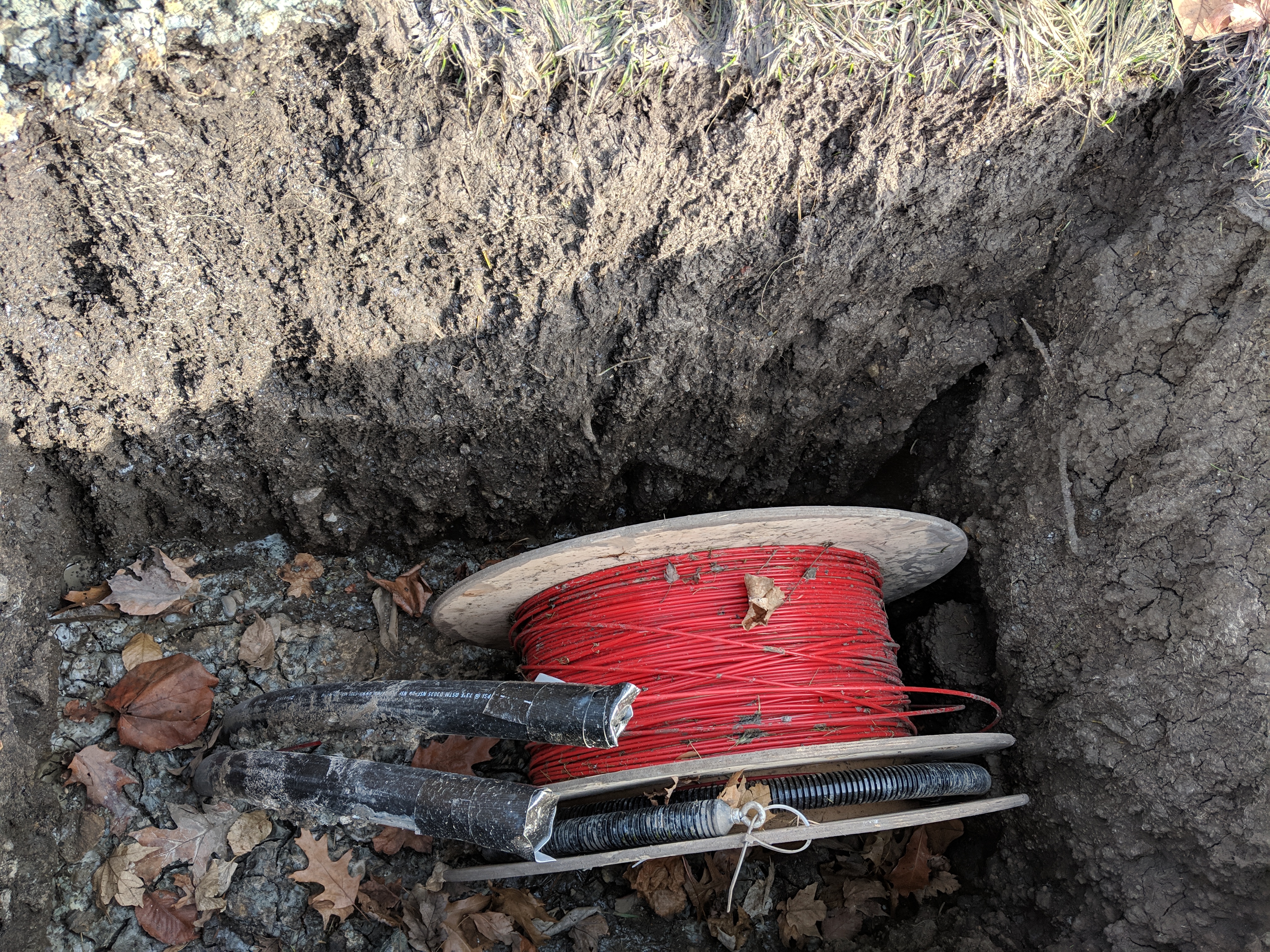 Lin highlights the fact that “geothermal has the (economic) advantage of not having to compete with real estate because it is underground.” However, that blessing lends itself to the curse of being easily overlooked by the average person.

While geothermal systems can be installed beneath parking lots, soccer fields, and well-trafficked corridors on university campuses — an aesthetically pleasing as well as efficient use of land — their lack of visibility prevents people from noticing what’s transpiring below. Much less eye-catching than solar panels and wind turbines, geothermal’s lack of exposure risks perpetuating the myth that the resource isn’t as prevalent as it actually is.

“You don’t see (geothermal).” Lin said. “A lot of people think, ‘If I don’t see it, it doesn’t happen.’ But geothermal does happen.”

In the long term, U of I researchers plan to build a platform to educate and inform the public about geothermal energy: what it is, why it matters, and how it can help make strides toward sustainable energy solutions. Like most of Earth’s natural systems, the changes observed by implementing geothermal energy are best observed over longer periods of time. Lin explains how that extended scope is central to Illinois’ mission:

“We’re looking at a broader scientific contribution here. What we understand can help others design and implement geothermal energy (systems), no matter if it’s for direct use or geothermal exchange. With geothermal, you can project its impacts 20, 30 years into the future — the infrastructure can be (used for) decades.

“If you view this renewable energy source like a LED version of HVAC rather than like an old furnace, I expect people’s decision-making processes (will) be very different. ”