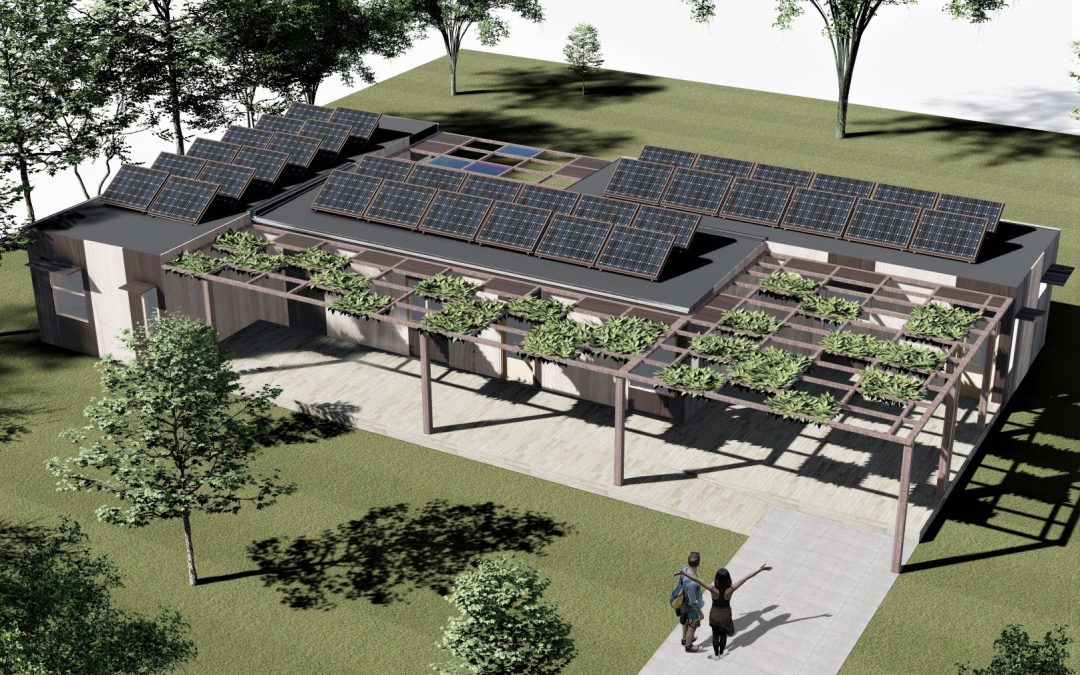 If you take off from campus and head south on Race Street, you’ll soon encounter the ReHome: a $250,000 modular net-zero-energy dwelling. Unassuming to passersby, the 978-square-foot structure is backed by a Registered Student Organization that is 100-plus students strong: the Illinois Solar Decathlon Team (ISD).

The ReHome was constructed in 2011, but ISD’s formation predates the project by four years. In 2007, the U of I campus joined forces with 200 teams across the globe to take part in the U.S. Department of Energy Solar Decathlon.

With a mission to engage and empower a rising generation of green architects, Solar Decathlon competitions demand that students not only ideate and design, but construct fully functional homes that implement solar power (plus all manner of other sustainable tech).

Ambitious as always, the Illinois team debuted in 2007 to compete in the latter.

The cohort appeared in Washington D.C. to showcase the Element House: a full-size, fully operational solar-powered home. Since then, ISD has seen five homes through from start to finish, including: the 2009 award-winning Gable Home, which meets Passive House Institute U.S. standards; the previously mentioned ReHome, which currently resides in Urbana (and is open for tours); and the Etho House, designed for Solar Decathlon China 2013.

In 2018, ISD competed in a special Solar Decathlon China Build challenge that fostered a collaboration between the University of Illinois and Shanghai Jiao Tong University. The product? Waterside Cube, a water-conscious model that “draw(s) from traditional Chinese dwellings … and meld(s) these into a building complex that would save energy and improve the surrounding environment.”

“I was representing Team Shunya, a team from India, at Solar Decathlon China 2018,” Mistry said. “It was indeed a life-changing experience for me. Not only designing, but making it practically feasible to complete the house construction in 15 days was a big challenge and learning experience.

“It was a proud moment to see our two years of hard work and vision turning into reality. We were competing with15 teams from around the world, and the University of Illinois was one of them.”

A civil engineer with a passion for green building, Mistry was immediately drawn to the Illinois team’s potential. It soon became clear that Urbana-Champaign was the venue for him to pursue his graduate degree in architecture. 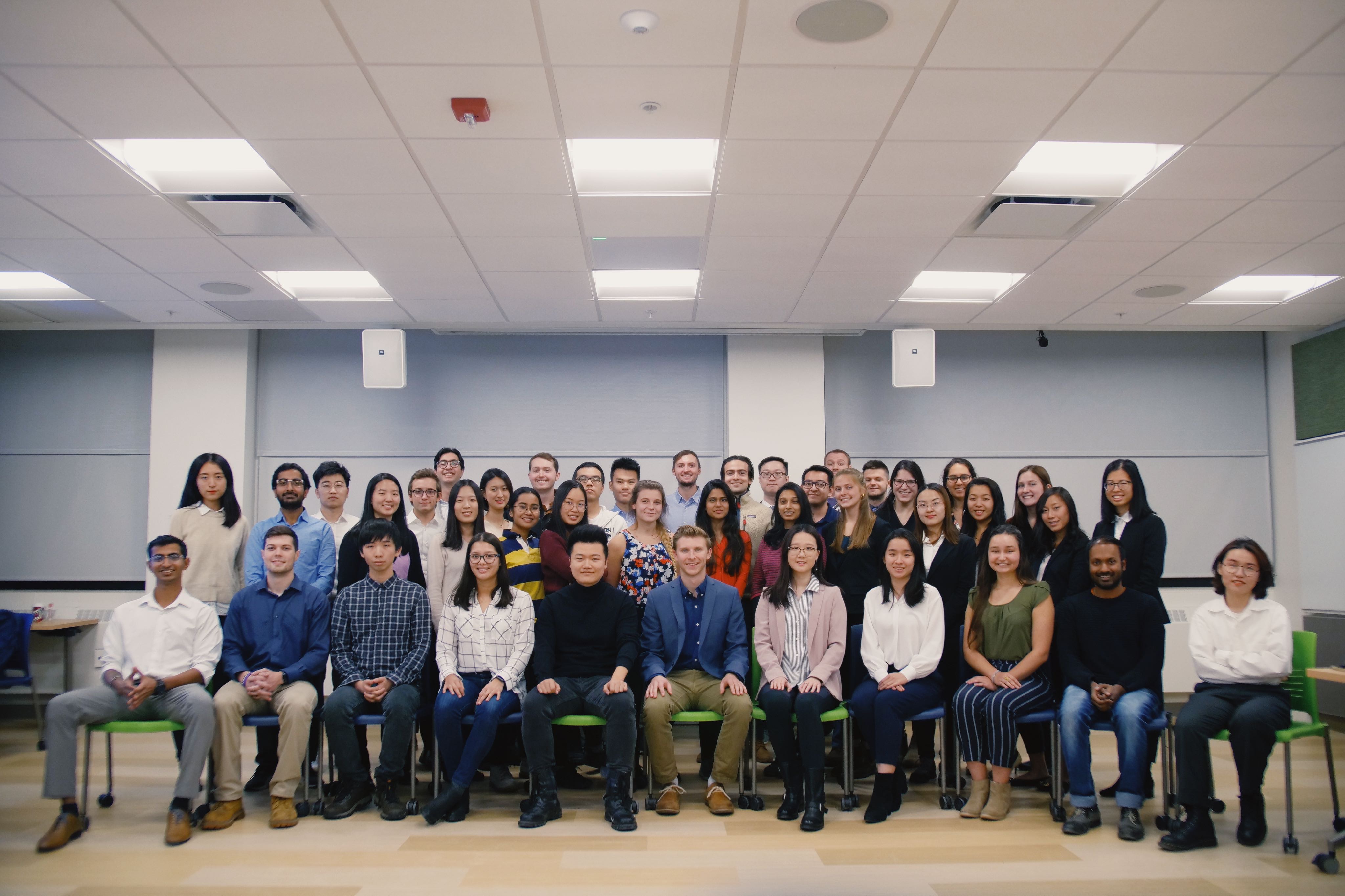 Mistry said one of ISD’s distinguishing qualities is its multidisciplinarity. Distributed throughout the RSO’s Build, Design, and Concept teams are a diverse cast of undergraduate and graduate students occupying an array of disciplines, from architecture to civil engineering to computer science.

“It’s very collaborative among different disciplines on campus, that’s a unique thing about our RSO,” he said. “You can name any discipline, and we have students who come from there.”

The collaborative heart of green construction not only generates creative design possibilities (see: Waterside Cube), but is instrumental in rounding out students’ professional development.

“If you’re a structural engineering student, for example, you will be working closely with architecture and building integration teams in our RSO along with professional structural engineers to produce an efficient design that meets the competition constraints,” Mistry said. “This unique research and professional experience is crucial for development of design thinking and problem solving skills which is quite valuable when they enter the industry. Applying learning from Solar Decathlon into real life will actually make students’ design decisions more logical, rather than just a single-disciplinary approach.” 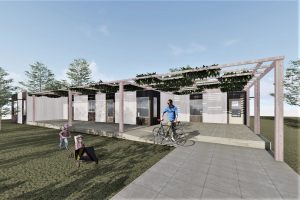 While brainstorming innovative — and often never-before-seen — design elements is certainly challenging, the payoff is enormous: entering the ground floor of green building and long-term sustainable design. Better yet, doing so in a way that matters, that can be seen, visualized, and — in the case of the Element House — toured by thousands of interested individuals.

“You feel like your vision has come into reality, and you are a part of that reality,” Mistry said.

Each day, the reality of sustainable housing becomes clearer and more critical. From the initial raw materials to the energy consumed during construction to end-user financial feasibility, the lifecycle of the building industry is an environmental behemoth. However, it is one that can be conquered.

“The existence of climate change and the requirement of sustainability are big issues” Mistry said. “People talk about it, but there aren’t many solutions that people can adopt in their day-to-day life. What I would like to talk about is how we can make small decisions and small changes which are more easily implemented.

“While we’re waiting for big policy change, why don’t we all get together and start implementing on a day-to-day basis?

ISD’s latest venture is a two-year vision that comes to a head this upcoming summer in Washington, D.C.: the Solar Decathlon Build Challenge 2020. The Illinois students’ contribution to this prestigious competition, called Project ADAPTAHAUS, began conception in Fall 2018. True to its name, the team’s modular, flexible units will be adaptable in all respects — from accommodating young, urban professional populations, to aging demographics, to complying strictly with ADA regulations.

Construction on the home began Champaign in early 2020. Then, in June, the home and its builders will come full circle: 13 years after ISD’s D.C. debut in 2007, the team will once again compete at the Capitol. They’ll also stage an exhibition for a crowd estimated at 800,000.

Whether it’s ISD’s 100 committed members or the international ranks of 35,000, Solar Decathlon is restructuring the world — and the homes — that we live in. Brick by brick, home by home, and student by student.

Want to learn more about Illinois Solar Decathlon? Visit the website and follow the team on social media for more information about the organization, the upcoming competition in June 2020, and how to become a part of ISD. OR contact Mayur Mistry at mmistry2@illinois.edu. Stay tuned in the spring semester for updates as we follow ISD’s progress along the competition trail to Solar Decathlon Build Competition 2020!